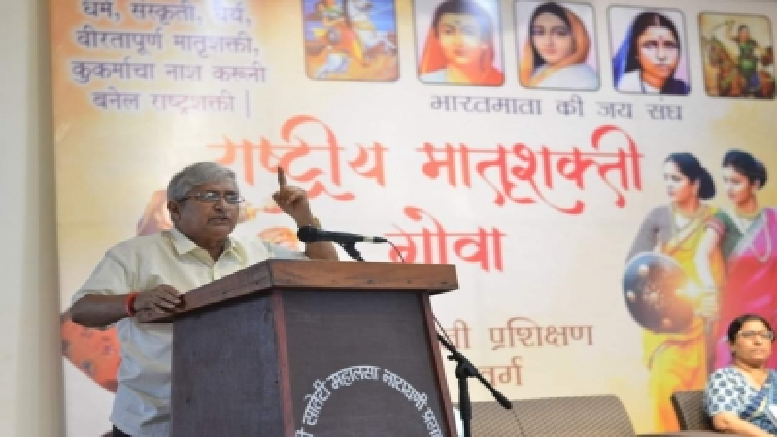 Days after questioning the relevance of Spanish priest St. Francis Xavier as the patron saint of Goa, former state RSS chief Subhash Velingkar on Tuesday unveiled the ‘Goa Files’, underscoring the atrocitis committed by the Portuguese colonists during the colonial era.

The ‘Goa Files’ essentially contains photographs and documents depicting the atrocities carried out by the Portuguese on the people of Goa.

Velingkar, who now heads the Hindu Raksha Maha Aghadi, also said that while he is not against Goa’s Catholic community, a section of the society is suffering from ‘Stockholm Syndrome’ due to the reported abuse suffered during the colonial regime, especially during the inquisition, which was requisitioned by Xavier.

“How can I call a person ‘Patron saint of Goa’ or ‘Goencho Saib’, because of whom our forefathers suffered? Xavier helped the Portuguese commit atrocities against Goans… How he can be referred to as ‘Goencho Saib’,” Velingkar questioned, while releasing the ‘Goa Files’ here.

Velingkar also said that he wants to bring the history of such atrocities before the people of Goa during the 20-day campaign launched by his association.

“We will continue to make people aware of the atrocities carried out by Xavier,” he said.

Velingkar also said that some forces, namely some politicians and priests, are involved in dividing Hindu-Catholic unity, which should not happen.

“We (Hindus and Christians) should come together and unite on the lines of nationality. At many places, our traditions are the same. Our forefathers were the same,” Velingkar said.

Velingkar’s recent public statements in the build up to Tuesday’s event, about atrocities committed during the Portuguese rule and questioning the credentials of St. Francis Xavier, had triggered a controversy, with politicians, priests and a section of the civil society criticising the ex-Goa RSS chief.

Velingkar had said that Sage Parshuram, who is claimed to have created the land of Goa, and not Xavier should be regarded as the patron saint of the region.

Former Chief Minister Churchill Alemao and ex-minister Micky Pacheco have already lodged a police complaint against Velingkar for his statements.

“I feel that Parshuram should be recognised as the patron saint of the state and we will work towards achieving this goal,” Velingkar said.

Speaking to reporters, Velingkar also said that there is a need to produce a film by the name ‘Goa Files’ to show the atrocities carried out by the Portuguese colonists.