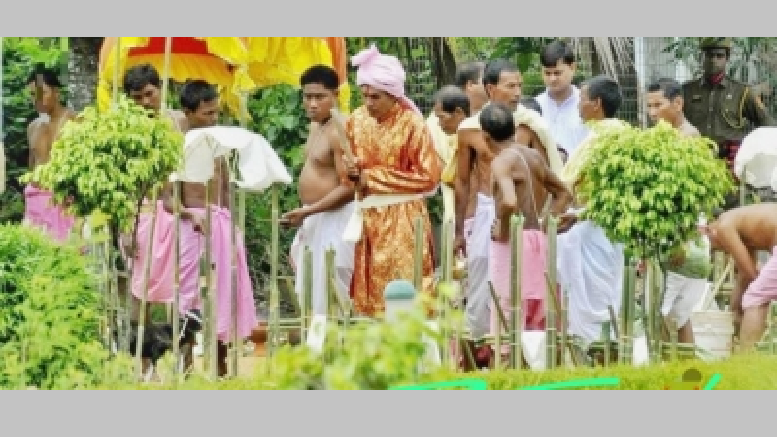 Be it death, birth or even recreation, all these are not permissible during the celebration of the centuries-old ‘Ker Puja’ in Tripura and other northeastern states, as well as in the Chittagong Hill Tracts of Bangladesh.

This annual festival, organised by the indigenous vanvasi population consisting of intricate, time-honoured rituals, is aimed at the well-being of people and warding off evil spirits.

Although the 43-hour-long festival began late Monday, the actual ‘Ker Puja’ will be held on Tuesday.

As per the strong conventions and customs of the ceremonies, no pregnant woman or critically ailing person is allowed inside the puja areas.

Any person who violates these regulations is bound to pay a fine and the Ker Puja has to restart afresh from the initial stage.

As has been the norm, West Tripura District Magistrate through a gazette notification notified the areas of Ker Puja in Puran Habeli (erstwhile capital of princely ruled state of Tripura) at Khayerpur, nearly 12-km east of Agartala, and Natun Habeli in Agartala.

Sponsored by the state government, Ker Puja is one of the important events in Tripura.

The literal meaning of ‘Ker’ in the vanvasi Kokborok language is “specified area”.

“The puja rituals started at 10 p.m. on Monday night and will continue uninterrupted for more than 43 hours,” the gazette notification said.

“Pregnant women and sick people are to be kept out of the specified puja area before the rituals of the puja starts. No one is allowed to enter the notified area till the rituals end.”

Speaking to IANS, writer and historian Salil Debbarma said: “The government notification issued on July 18 and widely circulated, prohibiting any kind of entertainment, dancing, singing and movement of animals in the specified Ker Puja areas.

“The customary rules and conventions are strict and not easy to follow. Many decades ago, the then District Magistrate had been fined for entering the notified areas of Ker Puja without permission of the chief priest.”

If there is a birth or a death during the puja, then a family has to pay a fine as well.

During Ker Puja, any kind of recreation is strictly banned in the notified areas. The Tripura Police offer a gun salute before and after the ending of the puja.

“The head priest and his associates light up the fire by rubbing bamboo. The vanvasis and people around the Ker Puja areas carry the fire to their homes believing that it would ensure their well-being and thwart the evil spirit,” he said.

The rituals are carried out at government expenses as per the merger agreement inked between the state and the erstwhile royal family in October 1949.

Besides Agartala and Puran Habeli, the puja is organised in many vanvasi villages towards the end of the year or at the end of the harvesting season.

“The erstwhile royal dynasty would perform Ker Puja for the welfare of the people, praying against calamities and external aggression,” said writer and historian Panna Lal Roy.

“The sacrifice of birds, animals and offerings characterise this popular puja,” Roy added.

A structure constructed with green bamboo poles serves as the deity for the ceremonies.

The ‘chantai’ or head priest is regarded as the king on the occasion.

A close relative of previous royal families, Debbarma said that 90 per cent of earlier Ker Puja areas are now out of the existing notified areas.

He added that at the end of the 1,355-year rule by 184 kings, on October 15, 1949, the erstwhile princely state of Tripura came under the control of Bharatiya government after a merger agreement was signed between regent Maharani, Kanchan Prabha Devi and the Indian Governor General.

The merger agreement made it mandatory for the Tripura government to continue the sponsorship of several traditional vanvasi pujas and 14 temples, including the Mata Tripura Sundari temple run by the Hindu princely rulers.

This religious practice continued for more than seven decades. A full-fledged department — Public Place of Worship or ‘Debarchan Vibhaga’ functioning under District Magistrates in four of Tripura’s eight districts now has this responsibility and bears the entire expenditure of these temples in Tripura.