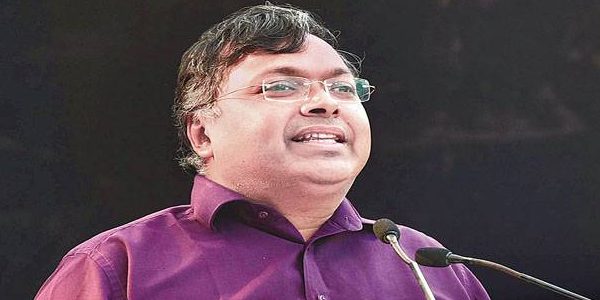 In order to attain materialistic gains of money and fame, people these days start commercialising the valuable knowledge of Hindu Dharma without even reading it by themselves. One such “businessman” who commercialised Hindu Dharma is Devdutt Pattanaik.

This gentleman is famous for twisting and turning the facts of Hindu Dharma and presenting them in a lucrative manner. By naming the scientific knowledge of our dharma and the historical facts as “Mythology” he has disrupted our entire system. Not only that, he has questioned each and every aspect of our Hindu existence by calling this knowledge as “mythology”.

It is a sad but true fact that we accept and praise all of his self-composed and false stories because he represents a “liberal intellectual” and we want to be the same.

He presents all of his fantasies and imaginations about Hindu Dharma without any authentic facts and proofs and calls them “My version of Hinduism”.

In the name of feminism, this person has committed blunders. Sometimes he calls Holika dahan as “Adharmi Holika” and other times, he makes the story of Ramayana limited to the love life of Sita and Mandodari as if they had nothing else in their lives and characters.

Mr Pattanaik feels “ISOLATION” in the picture of “Bharat Mata” and believes that she should also have a companion like Sita has Ram. The question we should ask is why? Also, how can a researcher and knowledge holder of Dharma feel such stupid things? Has he even read anything?

This person finds CASTE OPPRESSION in the killing of Daksh Prajapati by Mahadev, the death of Guru Dronacharya and the killing of Raavan by Ram. He asks his readers to reject class hierarchy in such cases. We wish that he should have read Ramayana, Mahabharata and Shiv Puran before putting up such stupid assertions.

Mahabharata is a historical account which teaches leadership, statecraft, principles of management, astronomy, feminism, astrology, ayurveda, political science, foreign policy and what not. This knowledge is not easy to gain and to understand its depth, one needs years of understanding and research.

But this self-proclaimed expert foolishly reduced the entire knowledge of Mahabharata and its 18 cantos into 36 tweets posted over 3-4 hours. The funny thing was that he didn’t even reach the core topic in Mahabharata.

In greed of fame and money, it is a common trend to demean and denounce Hindus in the world. Devdutt Pattanaik is one of these people. He calls Hindus stupid, violent, aggressive and intolerant.

If Hindus were actually like what he described, then he would have got treatment similar to how Taslima Nasreen and Salman Rushdie were hounded by their co-religionists. If he has guts, he should try and speak against Christians and Muslims. Then he will get to know who is violent and intolerant.

Money alone speaks to him and on being asked the logic, reason and proof behind his statements, one can experience his anger and foul language. He uses uncivilised words like stupid, f**k off etc. on being asked about proof.

He who calls Arjun a womaniser, forgets to call Ravan a Rapist. Maybe it is his overconfidence that is impacting his memory negatively.

When a youth questions Mr Pattanaik about the management and leadership skills taught by Hanuman ji, he ridiculously answers, “some monkeys require training while others don’t.”

Big FM stations like Radio Mirchi gave him a chance for a show and even there he told stupid stories. He said that Ganesh ji resides in sugarcane forest, Hanuman ji in banana forest and Maa Durga in imli forest. Can someone ask him the basis of these stupid statements ?

It is because of our ignorance that he is flourishing. Because we ourselves don’t read original and authentic granths and don’t want to go to Ashram, so we accept his lies.

There’s a famous English phrase- “Don’t judge a book by its cover.” We Bharatiyas are following it and committing a huge mistake.

Rubbish written out of incomplete and biased knowledge, served in attractive language and powerful covers, these writers exhibit their foolishness and we always accept it. We don’t even try and test the authenticity of books written by them.

The world knew us Bharatiyas for our questioning, analysing and debating skills. We were known for our extraordinary brains, but today we’ve forgotten all of it. We need to understand the difference between right and wrong. We need to question.

We Hindus are the reason behind our own destruction. We don’t raise voice against fraud businessmen like Devdutt Pattanaik and then we suffer.

Be aware of commercialising businessmen like Devdutt Pattanaik who talk nonsense. Whenever you encounter any such person, call them out for spreading lies. The Bhagwan who you pray and ask favours from, can you not even contribute this much for your Bhagwan?

(This article was published as a post on facebook page of Sanatan Women on June 24, 2019 and has been reproduced here in full.)