Christian Parents Get ‘Namaste’ Banned From Yoga Lessons In US School 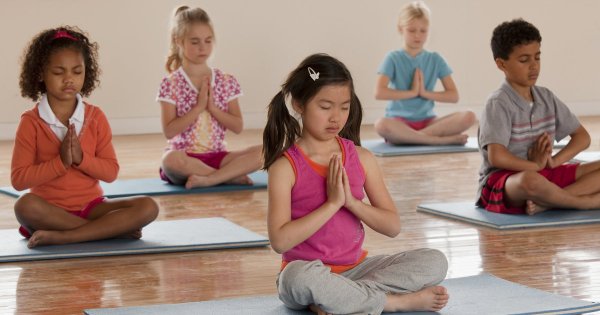 Have you ever heard of Hindu parents opposing Karate classes because they promote Zen Buddhism; or opposing Christmas celebrations/hymn singing in school because these promote a religion where ‘idol-worship’ is strictly forbidden and non-believers are destined for hell? No. Hindus are brought up to believe in ‘Sarv Dharma Sambhava’ which is popularly, albeit misleadingly, translated as ‘All religions are equal’. Moreover, Hindus are focused on material progress, while centuries of conditioning have led them to believe that Western ideas (including religious ideas) are inherently superior.

However, the exclusivist doctrine that is central to Christianity, which in turn is a major influence on Western (especially American) society, reared its ugly head in Bullard Elementary School in Kennesaw, Gerogia USA, when the school was forced to make changes to its yoga classes after Christian parents complained about the Hindu origins of the exercises.As this media report says-

“No prayer in schools. Some don’t even say the pledge, yet they’re pushing ideology on our students,” mother Susan Jaramillo told 11Alive. “Some of those things are religious practices that we don’t want our children doing in our schools.”

The school hasn’t cancelled yoga; however, principal Patrice Moore sent a letter of apology to parents and vowed to tweak the program. “When yoga moves are used in classrooms, students will not say the word ‘Namaste’ nor put their hands to heart center,” Moore wrote, according to 11Alive. “When coloring during ‘brain breaks,’ Mandala coloring pages will not be used.”

“Namaste” and its accompanying gesture are typically used as a greeting. While it literally means “I bow to you,” the word has been variously translated as “the light in me sees the light in you,” “the God within me greets the God within you” and “I honor the spirit in you that is also in me,” among others. (you can also read this Hindupost piece about Namaste)

“The gesture Namaste represents the belief that there is a Divine spark within each of us that is located in the heart chakra,” Yoga Journal explained. “The gesture is an acknowledgment of the soul in one by the soul in another.”

One area instructor who has worked in nearby schools said yoga wasn’t meant as a statement of faith; it’s a tool to help keep calm and relax.  “It’s a way to get children aware of their breath patterns, their tendencies and habits,” Cheryl Crawford of Grounded Kids Yoga told the Atlanta Journal-Constitution. “Often times they’re focused outwardly, they’re not focused inwardly. It helps them if they’re very worried… and to use that energy to do something else.”

The benefits of yoga have sparked a trend in the United States. According to a National Health Interview Survey, more than 21 million adults and 1.7 million kids currently practice. However, yoga is not secular enough for many Christians, especially fundamentalists.

“As Christians, we are to meditate only on God and His Word,” Jeremy Butler of the Christian Apologetics & Research Ministry wrote. “We are not to focus on ourselves or to clear our minds. The Bible never gives us a prescription to free our mind.”

Others are fine with it — with caveats. “As a spiritual path, yoga is incompatible with Christian spirituality,” wrote Michelle Arnold, staff apologist at the Catholic Answers website. “But if you can separate the spiritual/meditational aspects of yoga from the body postures and breathing techniques common to yoga, then you might be able to use those postures and techniques beneficially for health.”

This is not the first instance of acute Hinduphobia in the so-called modern, progressive societies of the West – and it won’t be the last. Even the universal knowledge of Yoga is anathema to some, unless it is stripped of its Hindu origins and completely appropriated as ‘Christian Yoga’. Other events like the California history textbooks portraying Hindu Dharma as inferior and barbaric, to anti-Hindu political rhetoric against a bhoomi pujan (ground breaking ceremony) show how deep rooted the prejudice is in the West against Hindus and others deemed ‘pagan’ by Christian missionaries and fundamentalists.

Sadly, many in Bharat  are still mentally colonized or act as sepoys of the same West. Any move to introduce Yoga in our schools is met with howls of ‘saffronization’, while outrageous discrimination and barbaric punishment for Hindu students practicing their native culture in convent missionary schools of Bharat is overlooked.

How Convent Schools In Bharat Punish Students For Hindu Beliefs

This blog by @realitycheckind exposes the troubling mentality prevalent in even the most sophisticated missionary run convent schools (many of whom get public funding) across Bharat. Small children have been given the most barbaric punishments and their parents fined for daring to practice Hindu customs like tying rakhee (a sacred thread symbolizing brother-sister bond), or putting mehandi (a temporary tattoo made of natural dye) on their hands. Some of the recent examples listed in the blog are:

Yet, none of our alleged liberals raised even a murmur at these rights violations of Hindus within Bharat. And the same compromised left-liberal intelligentsia will stay quiet over this Hinduphobia which was on full display in Georgia, USA. In fact, they will join hands with US academics to bash Hindus for ‘rising intolerance’ by chanting certain keywords – Dadri, Rohith Vemula, JNU, Saffronization, Majoritarianism.