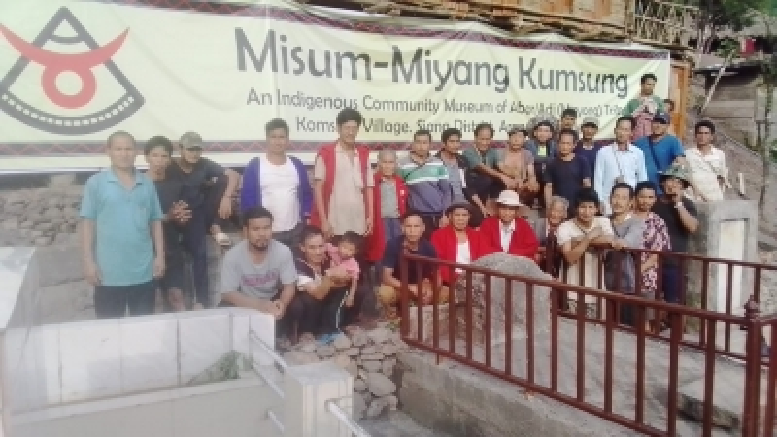 More than 110 years after the ‘Anglo-Abor Wars’, the villagers of Arunachal Pradesh have built a museum with the local forest resources to showcase the sacrifice of the warriors and the history of the battle.

The eco-friendly museum, ‘Misum-Miyang Kumsung’, in Arunachal Pradesh’s Siang district was recently constructed where Noel Williamson, the British political officer, was killed during the fourth and last Anglo-Abor war in 1911-12.

Tanyup Kopak, President, Nugong Banggo Kebang, a community-based organisation, said the Adi community villagers constructed the unique museum without any government support to highlight the war history, documents, photographs and various other war material and antiques for the knowledge of the young and future generations.

The museum also displays local and traditional handloom and handicraft items, hunting and battle gear, farm instruments and other items associated with the culture and history of the indigenous people.

Kopak first took the initiative to build the museum and motivated the villagers.

Uttaran Dutta, a US-based research scholar, helped the villagers to set up the indigenous museum.

“A committee constituted by the villagers would supervise the various affairs of the museum. The local people and the committee members would apprise the tourists and other visitors about the significance of the museum and the Anglo-Abor Wars,” Kopak told IANS over phone.

He said that the income generated from the tourists and in other ways would be used for the maintenance and development of the museum as well as to procure medicines for the needy members of the community.

“The British force had arrested many Adi community warriors and taken them to Assam and other places. According to some elderly people, a few of the arrested Adi fighters were sent to Kala Pani (Cellular Jail) in the Andaman and Nicobar islands, but evidence is yet to be found,” Kopak said.

Siang district’s Deputy Commissioner Atul Tayeng said that the villagers, without taking any kind of support from the government, constructed the museum.

“The kin of the slain British officer Noel Williamson have already visited the site where he was killed. The museum will attract the people of other districts in Arunachal Pradesh and tourists from other states and abroad,” the Deputy Commissioner told IANS over phone.

There are 26 major tribes and 110 minor tribes in Arunachal Pradesh with the Adi tribe having the largest population.

The Adis fought four battles against the British between 1858 and 1912 to protect their land from the colonialists and they were called the Anglo-Abor Wars.

The fourth and last war in 1911-12, which is one of the most important Anglo-Abor Wars in the history of the freedom movement in Arunachal Pradesh also known as the Poju Mimak, was fought from October 6, 1911 to January 11, 1912.

The Adi warriors during the battles and other fighting used the conventional skills and weapons of tribal warfare such as bows and arrows, spears, swords, booby traps, stone chutes and succeeded in stalling the invading British forces for more than three months at the historical battlefield.

The British forces ultimately got the upper hand in the war with the help of modern weapons. Many officials including Noel Williamson, Greigorson and many sepoys were killed in that war by the brave freedom fighter Matmur Jamoh and other heroes such as Tajong Tamuk, Lomlo Darang, Lotiyang Taloh and many others, who remain unsung in the history of India’s freedom movement.

Writer and social activist Gandhi Darang, who is familiar with the ‘Misum-Miyang Kumsung’ museum, said that a research team headed by Prof. Ashan Riddi and Dr David Gao of Rajiv Gandhi University is now on a 9-day visit to Lower Dibang Valley district, East Siang district and Siang district for research and documentation on the unsung heroes of Arunachal Pradesh who fought against the British.

The History Department of the Rajiv Gandhi University, a central varsity, constituted the research team, who during their visits will speak with all stakeholders and collect documents.

In this year’s Republic Day Parade in Delhi, the theme of the Arunachal Pradesh tableau was on the Anglo-Abor Wars, conceptualised and designed by the Art and Exhibition Cell of the state’s Directorate of Information and Public Relations.

The tableau showcased the valour of the Adis to protect their land from the British in the 19th century and the early part of the 20th century.