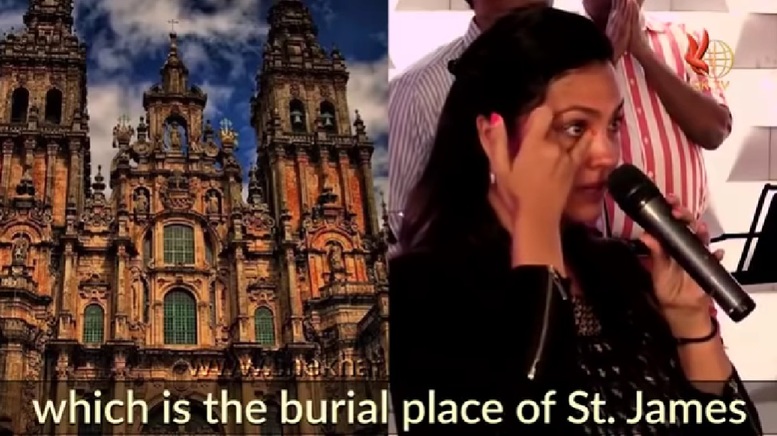 In a video published on YouTube in 2019, former Miss Universe Lara Dutta can be seen stating that her father was ‘treated’ by the intervention of supernatural powers, that is the blessings of Jesus attained through the power of prayers.

In the video, she can be seen addressing a group in English and sharing how her father, who was Indira Gandhi’s personal pilot, was not keeping well for a long time. One June she had to fly to Bengaluru where her family resides and they had to take her father to see the doctor.

Scans were done on him and it was found that his right lung had some infection and a mass was growing. The doctors informed that the mass had grown pretty rapidly and that it was very concerning. They laid out a treatment plan but the chances were not very positive as he had been a heart patient for over 35 years and was on blood thinners. The doctors gave him a 50-50 chance.

It was then that the former Miss Universe called Pastor Shekhar, her mother and mother-in-law and requested them to pray for her father because she didn’t want to put her 77-year-old father through “chemo and radiation”. She narrates that the doctors were unable to perform the bronchoscopy on him as he was bleeding internally, and stopped doing any medical procedures on him.

At that time, the pastor asked prayer groups to pray for her father, and she herself prayed extensively. She claimed that she walked “a hundred kilometres” and prayed every step of the way and did a walk to Santiago De Compostela (capital of northwest Spain’s Galicia region), prayed and meditated on something that the pastor said.

During her speech, she also stated that the pastor encouraged her to not focus on the doctor’s reports but focus on the “report of God”. Her father was again put through a scan by the doctors and this time the report showed that the mass had shrunk significantly. Lara Dutta calls that report, “God’s report”.

We understand that prayer is a natural resort for any human when a near and dear one is going through pain and suffering; the former Miss Universe did the same. However, a celebrity must think responsibly and weigh the impact of the message being passed to her audience.

She gives a flawed message that prayers are more potent than doctors’ treatment. In situations like these, when one doctor or hospital states that they are unable to perform treatment, it is always advisable and recommended that one takes the patient to another doctor or hospital for a second opinion or even a third opinion.

But an emotionally overwhelmed celebrity encourages people to just pray and walk to churches in foreign lands, instead of looking for medical alternatives. This can actually prove to be life-threatening if a fan blindly follows her advice. In 2017, a 2-year-old American child died after her faith-healing parents refused medical treatment.

Again, though Dutta says it was “God’s report” that showed the mass had decreased in size, the truth is that the scan was done in a hospital by a doctor. Cancer is a serious disease and every year there are almost 2 million new cancer cases and over 600K deaths in USA alone. Most of those American cancer patients are Christian and there is no dearth of ‘miracle Christian healers’ in USA (that’s where this business model came to Bharat from), yet people die.

Her personal faith as a devout Catholic is one thing, but the message she is giving out to society is misleading and detrimental. This reminds us of Bollywood comedian Johnny Lever’s claims that his “In the name of Jesus…” miracles had treated Hrithik Roshan and many others.

Bharat is increasingly plagued with a plethora of fake Christian healers aka quack healers fooling gullible people. One such ‘healer’ Sebastian Martin aka ‘Healer Baba’ who operated in Vasai, Mumbai died due to complications resulting from diabetes. Earlier this year, Pastor Balwinder Singh of Jalandhar was accused by a Hindu family from Mumbai of fraudulently converting them to Christianity under the pretext of healing their daughter who was a cancer patient and also duping them of INR 80,000.

This fast-spreading ‘Christian quack healing’ epidemic is hardly discussed by mainstream media, but Baba Ramdev – who advocates ancient proven knowledge systems of Yoga, pranayama and Ayurveda for a healthy life – is routinely mocked and every word of his is critiqued. When Baba Ramdev launched the Ayurvedic medicine Coronil as immunity booster against Coronavirus, the entire MSM came down on him like a ton of bricks and he was dragged to court. Madras HC even fined him Rs 10 lakh for chasing profits by claiming COVID-19 ‘cure’, but that order was later stayed.

IMA which is headed by an unscrupulous evangelist Dr. Johnrose Austin Jayalal has been targeting Ayurveda as ‘unscientific’. Doctors at AIIMS Rishikesh also took Baba Ramdev to court for ‘disseminating false statements’. We wonder what IMA and the AIIMS doctors have to say about Lara Dutta’s miracle healing claim?

The YouTube channel which posted Lara Dutta’s video is run by one Shekhar Kallianpur ministries. The site says Kallianpur was born in a Hindu Brahmin family, to an ‘astrologer’. He was fascinated by some ‘mythological books’ at a young age, but never satisfied with answers on life after death. He became “lost in sin like any teenager” and felt empty within despite being a “godly Brahmin’s son”. Everything changed, of course, when a friend gave him a Bible in the late 70s and “God spoke to him”!

Now, Kallianpur calls himself ‘Apostle’ (pioneering missionary) and his wife Lavina is ‘Senior Pastor’. The site has videos of his travels all over Bharat (Delhi, Ahmedabad, Siliguri, Kolhapur, Cochin, Sambalpur) and across the world to countries like Costa Rica holding ‘supernatural transformation’ and ‘miracle healing crusades’.

In an interview on Christian Broadcasting Network, the influential US Protestant evangelical channel started by Pat Robertson, we find that Kallianpur is also the national convenor of Pastor Benny Hinn Crusades in India (Benny Hinn is a fraud evangelist healer who raked in millions). Shekhar Kallianpur claims that Christians are “persecuted in India” because the poor are accepting Jesus Christ into their hearts, and the rich are losing their “slaves”, and their authority.

Incidentally, Lara was born to a Punjabi Hindu father and Anglo-Indian Christian mother. She is married to former tennis player Mahesh Bhupathi, also the offspring of a Hindu father and Christian mother. Bhupathi’s mother Mira believes ““My burden is for India, since in this country we fight with about 33 million other gods….before I reach heaven I will take at least 10,000 souls with me….Now when we pray I am blessed that so many deliverances take place and even cancers are healed.”

It goes without saying, had a Hindu celebrity promoted the idea that Pooja-Yagna, and not doctors, treat life-threatening ailments, the fellow woke and secular people of Bollywood would have come down heavily criticising the Hindu celeb.