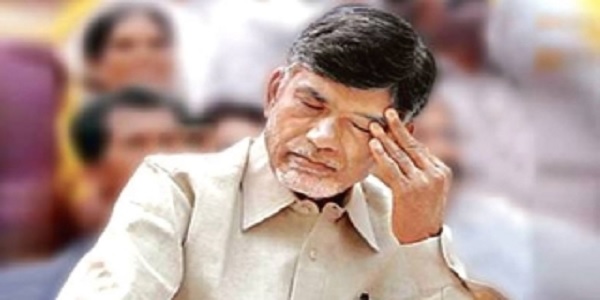 Chandrababu Naidu has been a vociferous critic of Modi since leaving the NDA but not before enjoying more than 4 years of NDA’s benevolence and dolements.

When he won in 2014 the same EVM’s were in deployment  but since he was on the winning side everything was hunky dory. But the political wind’s do not necessarily blow according to your wishes and in a democracy it’s the electorate who have the last laugh.

Sensing the winds of change and the throne being usurped, Naidu resorted to the convenient act of blaming a sacrosanct watchdog which is monitoring and managing the most elaborate and mammoth electoral exercise on the planet.

Of the 92000 plus EVM’s deployed in his home State, only 300 odd machines malfunctioned which was not even 3% of the total machines deployed. But that was enough for the TDP supremo to cry foul. Obviously, he had gauged the mood of the voter and decided to shift the blame on the Election Commission and Modi. The Congress joined the chorus conveniently forgetting that its recent election victories in the 3 States were also locked in the same EVM’s.

This senseless attack on the office of the Election Commission, which is a very important cog in the wheel of our democracy, only brings to the fore the frustration of the opportunists like Chandrababu Naidu who in the likelihood of defeat are already looking for scapegoats.

He has aligned with the Congress which is his party’s (TDP’s) main adversary in Andhra Pradesh and now when his own bastion seems to be caving in, he has taken refuge under EVM’s.

Naidu has always been looking for greener pastures and shifted from the Congress to TDP only to shift again to the NDA and again come back to the UPA even though Congress and TDP are arch rivals in AP.

Naidu’s disliking for Modi after he left the NDA was obvious and he has been leading the charge against Modi and trying to rally the opposition on one platform. But his efforts will come to a notch if he is unable to win seats on his home turf.

His stock in the opposition is likely to fall if he is unable to bring the numbers on the table. Sensing the public mood and the likely dip in TDP’s fortunes, he decided to blow the trumpet blaming the election commission and the EVM’s for his likely defeat at the hustings.

It’s no secret as to how the democratic institutions of our country were systematically degraded and destroyed by the longest ruling party and it took the likes of T N Seshan to add  teeth to the office of the Election Commission.

The Election Commission is performing a herculean task of conducting an electoral exercise in the largest democracy amidst the pressure from all political parties. They need to be commended for their efforts. Casting aspersions or doubts on their conduct by individuals and political parties is a manifestation of their exasperation and desperation in failing to woo the electorate.