The wounded and upset nation paid tributes to the Palghar saints 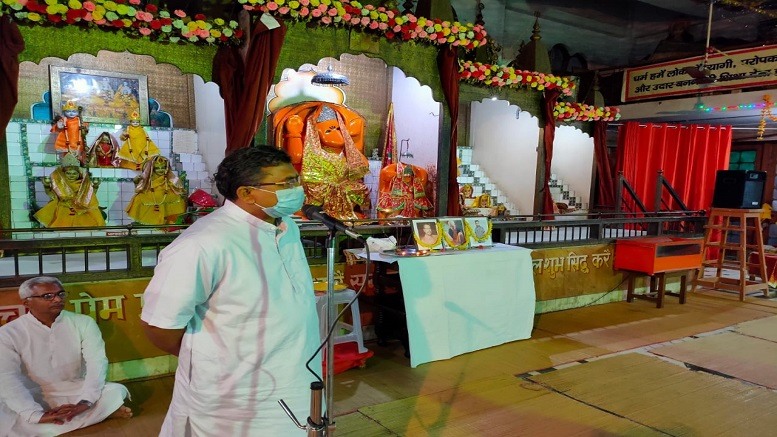 The nation, enraged by the brutal murder of venerable saints and their driver at Palghar, yesterday lighted a lamp to pay its respects to the departed souls and reiterated its demand for the harshest of punishment for the culprits.

Offering his tribute by lighting a lamp at the Vishva Hindu Parishad (VHP) headquarters in South Delhi, VHP’s Secretary General Sri Milind Parande said that it is very unfortunate that many killers of the venerable saints in this country of Sadhu-Sants and Dharmic spiritual traditions are roaming in the open even on the 13th day of the killing. The whole of Bharat, by lighting a lamp in the name of the saints has given the message of immense unity of Hindu society and it should not be taken lightly. Our true tribute will be the immediate arrest and harsh punishment of the actual killers and their masterminds. Also, the Hindu society always stands by the principle that no innocent person should be punished.

Shri Parande said that the anti-Hindu wicked and malevolent activities by the communist political and non-political organizations along with Christian missionaries have been inciting the innocent tribal people to violence in many parts of the country including Palghar district. The heinous killings of Pujya Shri Shantikali Ji Maharaj in Tripura and Pujya Swami Laxmananand Ji Maharaj in Odisha were the results of such violent propensities on the parts of the said anti-Hindu forces.

Additionally, memoranda addressed to the President of Bharat were also submitted to the Governors/LGs at several capitals of States/UTs and to DMs at district headquarters. The memorandum demanded a high-level investigation into the gruesome Palghar incident, arrest of the killers and their masterminds and exemplary punishment to them at the earliest.