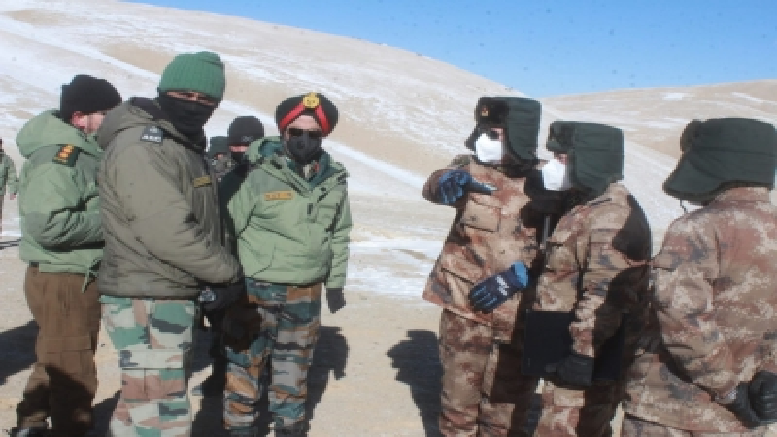 As per reports, Bharat and China have agreed to a monitored disengagement on both banks of the Pangong Tso. China had intruded into Bharat’s territory north of the lake in May last year. The rapid deployment led to the Chinese being blocked in their tracks.

Galwan displayed a strong Bharat’s intent of not backing down. The award of war decorations to those who were involved in Galwan conveyed the message that Bharat considered Chinese intrusion as an act of war and would escalate if needed to ensure defence of its territory.

Bharat’s counter actions led to occupying positions on the Kailash Ridge, which gave it a tactical advantage and domination of the Chinese garrison in Moldo as also the Spanggur gap.

Eight rounds of military talks and possibly more online meetings of the Working Mechanism for Consultation and Coordination on Indo-China Border Affairs (WMCC), failed to find a solution acceptable to both sides. Each round of meeting reduced differences in perception and demands of the other side.

Initially, all that China proposed was that Bharat pull back from South of Pangong Tso, which Bharat refused to accept. The ninth round possibly led to a solution acceptable to both sides.

The final disengagement plan would have been discussed at appropriate levels and accepted. This can be gauged from the fact that the last military level meeting was on January 24 and final acceptance issued on February 10, which indicated the depth at which discussions were held and the final solution would have met Bharat’s concerns. Bharat’s demand had been restoration of status quo of May 2020 and this has been accepted.

Bharat’s counter measures on both banks of the Pangong Tso gave the government confidence that the army would hold onto its positions, aware that any further Chinese push would be met with resistance and could be thwarted. Hence, Bharat never rushed into any agreement through multiple rounds of talks.

It matched Chinese deployment in every manner, whether in the form of troops, armour or artillery. It does appear that the current proposal has suited Bharat. The entire process would have been war gamed and every option of monitoring discussed prior to being accepted.

The Chinese Western Theatre Command was, till recently, headed by General Zhao Zongqi, who was known as being anti Bharat. It was under his watch that the Doklam and Ladakh incursions occurred. Bharat held onto its ground in both cases, leading to a stalemate. The solution flowed post his retirement and replacement by General Zhang Xudong.

The appointment of Xudong, a relatively unknown general in the PLA, displayed that CMC has taken direct control over the Western Theatre Command. This changed the complexion of talks between the two countries. It could either have signaled a move towards peace or increased hostility. It signaled peace.

Now that the agreement has been reached and announced by both countries, the critical stages of monitoring and actual withdrawal now commence. These include an understanding on the process, time factors and ensuring each phase follows laid down schedules.

Galwan was an incident Bharat would never desire to repeat. Further, it was the Chinese who first intruded and subsequently did not adhere to their own proposals of withdrawal reached in earlier rounds. Hence, the onus of ensuring adherence to agreed terms and conditions would remain on China.

Troops on the ground and in close contact would be the last to withdraw. This will ensure that positions currently held by Bharat would remain in its possession till the Chinese have completely pulled back and any attempt to avoid adhering to the agreement would render them more vulnerable. A good start and it should be followed by an equally suitable pull back.

Reaching an agreement has been a positive step. Tensions due to deployment in close proximity have the potential of escalating, an act which both sides have sought to avoid. Now that they have reached an understanding, doors have opened for restoration of peace and tranquility. However, monitoring the withdrawal and ensuring that agreements are not breached gains prominence.

This is the time when officials of both, military and diplomatic cadres, must remain in close contact with each other to ensure that incidents like Galwan do not reoccur. Confirmation of withdrawal should be monitored by electronic means in the initial phases and subsequently by joint patrols.

Bharat has stared down the dragon once again and for this we need to be proud of our armed forces, which have displayed resoluteness, determination and courage. The government, which stood behind the soldiers, must now take a backseat and let the monitoring be done by those on the ground, as they remain aware of the true situation.