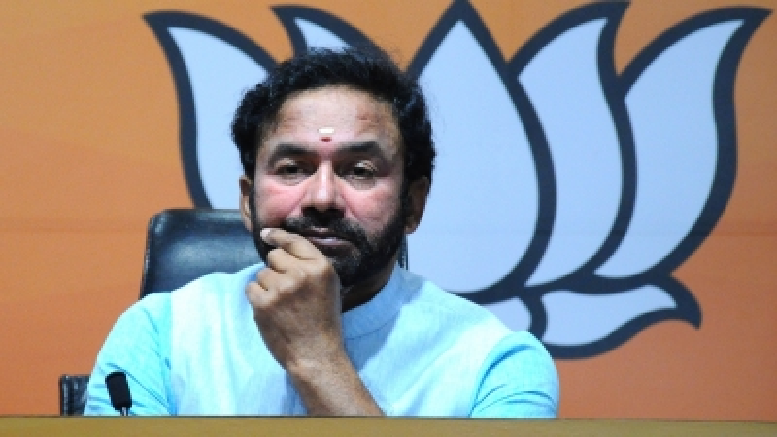 Union Minister G.Kishan Reddy claimed that Telangana Chief Minister K.Chandrashekhar Rao is taking inspiration from West Bengal and said such tactics won’t work in the state. Reddy made the comment over the arrest of Telangana BJP president Bandi Sanjay Kumar.

In a series of tweets last night, Reddy said, “KCR (K Chandrasekhar Rao) seems to be taking inspiration from West Bengal! Such tactics won’t work here. Telangana People won’t let it happen. The @BJP4Telangana will foil any such attempts. Our people have fought the tyranny of Razakars & Nizams in the past, if need be, they’ll fight again!”

The Telangana Police claimed that state BJP president was arrested for violation of Disaster Management Act during a protest on Sunday night, Reddy said, “@TelanganaCMO KCR garu wearing a mask is a rarity! During the recent engagements in my constituency, @TRSPartyOnline Ministers didn’t wear masks…booking our leader falsely for Covid-19 Protocol violation isn’t hypocrisy, then what is?”

“Telangana is witnessing Destruction of Democracy & absolute mockery of Rule of Law. TRS govt is scared of the growth of the party in the state. Framing of false charges & arrest of our @BJP4Telangana President Sri @bandisanjay_bjp Ais an example of draconian tyranny of KCR Govt,” Reddy tweeted.

Telangana BJP president, also a member of Parliament, was arrested on Sunday night when police foiled his protest to demand the state government to amend an order relating to transfer of the government employees and teachers. The MP, who was kept at Manakondur Police Station overnight, was on Monday shifted to the Police Training Centre in Karimnagar town.

Earlier on Monday afternoon, BJP chief J.P. Nadda termed the arrest another glaring example of the murder of democracy and constitutional rights by the state government.

“It is yet another glaring example of the murder of democracy and constitutional rights by the Telangana government. The BJP vehemently criticises and denounces this attack on the BJP leaders and karyakartas (workers),” he had said.

A court in Telangana’s Karimnagar town on Monday sent state BJP chief and MP Bandi Sanjay Kumar to judicial custody for 14 days for attacking police personnel and violation of Disaster Management Act during a protest on Sunday night which was foiled by the police.