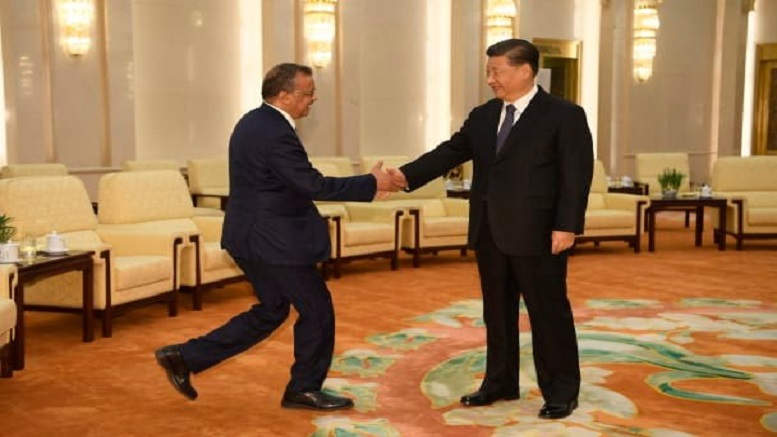 As the mayhem of Coronavirus engulfs the world with the number of those infected nearing 2,00,000 in America and 900,000 the world over, Spain and Italy which were until 2 months back bustling with activity, have turned into ghost countries with ice skating rinks being turned into morgues and the dead being incinerated for want of space and time according to eyewitness.

The “Chinese virus”, as so aptly named by President Trump, has consumed over 47,000 lives the world over. As the world is under lockdown and the death toll mounts by the minute the sequence of events which led to this pandemic needs to be analysed. The other and more important thing is the role of the two men who mattered most when the pandemic was consuming the world like a black hole – The Chinese President who did the cover up and the Director General of WHO (World Health Organization) who supported him in this cover up.

The conversation between the two when Dr Tedros Adhanom Ghebreyesus visited Beijing on 29/1/2020 says all. The Chinese President while hosting Dr Tedros said “China has full confidence and capability to win the battle against the outbreak of Pneumonia caused by the novel Coronavirus (2019-ncovid). The epidemic is a devil. We will not let it hide” he said.

In return, the WHO President said “It is admirable that the Chinese government has shown its solid political resolve and taken timely and effective measures in dealing with the epidemic. President Xi’s personal guidance and deployment show his great leadership capability.”

If this praise was not enough, he delivered another bloomer by saying “China has released information in an open and transparent manner, identified the pathagon in a record short time and shared the genetic sequence of the novel Coronavirus in a timely manner with the world and other countries.” “Chinese measures are not only protecting its people but also protecting the people of the world.”

Thus, while Dr Tedros was busy showering encomiums on the Chinese President the Virus had already become a pandemic a good 40 days before he declared it as a pandemic on 11th March 2020. Wuhan, the capital of central China’s Hubei province, where the outbreak happened in mid November 2019 if not earlier, reported the matter to the WHO office in Wuhan as late as on 31st December 2019. Thus, the Chinese kept sitting on the life saving information and failed to report the outbreak for 45 crucial days if not more.

The WHO whose Director General had all the time in the world to praise the Chinese President declared it as an international emergency only on 30th January 2020 (Situation Report 10 of WHO). Thus, a vital one month of action time was lost by countries the world over to prepare themselves due to the negligence of the WHO and its Director General Dr Tedros Adhanom Ghebreyesus.

China on its part tried to conceal information from the very beginning and it was only on 21/01/2020 that China accepted the human to human transmission of the deadly virus. These 30 days of irresponsibility and callousness, if not more, has cost the world more than 32,000 lives till now and the situation has all the makings of snowballing into a major catastrophe.

A report in the South China Morning Post refers to 266 people contracting the virus in Wuhan and the first reported case being of a 55 year old on 17th November 2019. However, it was not until 21st January 2020 that China acknowledged the human to human transmission of the virus.

Jonathan Mayer Professor emeritus at the University of Washington, department of epidemiology said “it was entirely conceivable there were cases as early as mid November. We know that there are reports of early suppression of reports of cases and the whistleblower dealt with rather severely.”

What prevented the World Health Organization Director General from acting swiftly and decisively when millions of human lives were at stake and instead of acting like a Chinese mouthpiece? The answer perhaps lies in the now well known Chinese modus operandi of buying out countries by its carrot & stick approach. Thus, China has been doling out huge amounts of money to weak economies and then arm twisting them when they are unable to pay.

The dragon has been doing this in Pakistan, Sri lanka, Nepal and in African countries with success to extend its reach and dominance. China has invested in key infrastructure projects in Ethiopia with a Mckinsley report showing that the growth in Chinese investment has been uniformly high at an average growth rate of 52% a year since 2017.

Dr Tedros became the DG of WHO on 1st July 2017. According to the report, there were over 10,000 Chinese firms operating in Africa with most of them Ethiopia. To pay for all such infrastructure projects like roads, rails and skyscrapers, Ethiopia has taken massive loans from China amounting to more than 12 billion dollars, according to the China Africa Research Initiative at Johns Hopkins University of the US.

It says that Ethiopia is already under more than 30 billion dollars of international debt half of which is owed to China. According to Dr Niell Duggan, lecturer in the Department of Government & Politics at UCC, the Ethiopian government is unable to pay the debt and is aware that Ethiopian land and property will ultimately be in ownership of Chinese banks.

This is a classic example of getting sucked in to the now notorious Chinese debt trap where the country is at the mercy of the Dragon and probably explains why the Director General of WHO Dr Tedros Adhamas Ghebreyesus, who hails from Ethiopia acted or failed to act timely in warning the world.

He may have succeeded in buying some time from the Chinese President for his country’s debt but he failed in his duty as the Director General of WHO and more importantly in his duty towards humanity. Ironically, he has been the former health minister of Ethiopia.