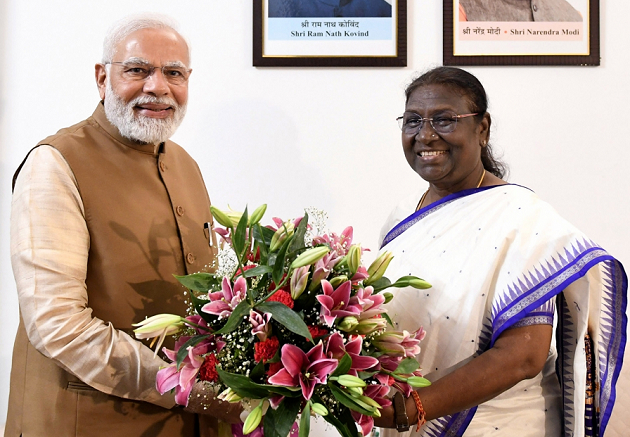 NDA candidate Droupadi Murmu secured victory in the Presidential poll on Thursday after the third round of counting as out of the 3,219 valid votes counted so far, she bagged 2,161 while Opposition’s nominee Yashwant Sinha got 1,058.

“I heartily congratulate Droupadi Murmu on her victory in the Presidential Election 2022. I hope — indeed, every Indian hopes — that as the 15th President of India, she functions as the Custodian of the Constitution without fear or favour. I join my fellow countrymen in extending best wishes to her,” said Sinha who is backed by the Opposition parties.

Counting of votes for the Presidential poll started on Thursday at the Parliament House in the national capital. Murmu and Sinha were pitted against each other in the contest. It emerged that votes were clearly stacked in Murmu’s favour.

Keeping in view the support extended by various parties, National Democratic Alliance (NDA) candidate Murmu had a clear edge over Opposition’s Sinha. Voting for the Presidential polls concluded on Monday (July 18)with over 99 per cent of voting. Opposition MLAs in several states reportedly voted for Smt. Murmu.

Congratulating President-elect Droupadi Murmu, Prime Minister Narendra Modi said that she will be an outstanding President who will lead from the front and strengthen Bharat’s development journey.

In a series of tweets, the Prime Minister said: “India scripts history. At a time when 1.3 billion Indians are marking Azadi Ka Amrit Mahotsav, a daughter of India hailing from a tribal community born in a remote part of eastern India has been elected our President! Congratulations to Smt. Droupadi Murmu Ji on this feat.”

“Smt. Droupadi Murmu Ji’s life, her early struggles, her rich service and her exemplary success motivates each and every Indian. She has emerged as a ray of hope for our citizens, especially the poor, marginalised and the downtrodden.”

Lauding Murmu as lawmaker, Modi said: “Smt. Droupadi Murmu Ji has been an outstanding MLA and Minister. She had an excellent tenure as Jharkhand Governor. I am certain she will be an outstanding President who will lead from the front and strengthen India’s development journey.”

“I would like to thank all those MPs and MLAs across party lines who have supported the candidature of Smt. Droupadi Murmu Ji. Her record victory augurs well for our democracy.”

People at Smt. Droupadi Murmu’s hometown Rairangpur in Odisha’s Mayurbhanj district burst into celebrations on Thursday. Scores of people gathered at the residence of Murmu in Rairangpur and burst firecrackers, while local artistes performed tribal folk dance. The house of Murmu was decorated with flowers and lights.

People at her native place were also seen celebrating the occasion on the streets of Rairangpur. Also, around 20,000 sweets were prepared which are now being distributed among the people.

“We are really happy and proud as our ‘didi’ has won the election for the highest post in India. From the very beginning, we were confident that she would win this election. So, from the morning we have started celebrating her victory,” said Sonali, a native of Rairangpur.

“This is the first time that someone from Odisha is going to be the President of India. We are also happy that a tribal lady has been elected for the President’s post and that too from Odisha,” said Simanta Digar, a social worker from Mayurbhanj.