Shah is the HM Bharat has been seeking since Patel 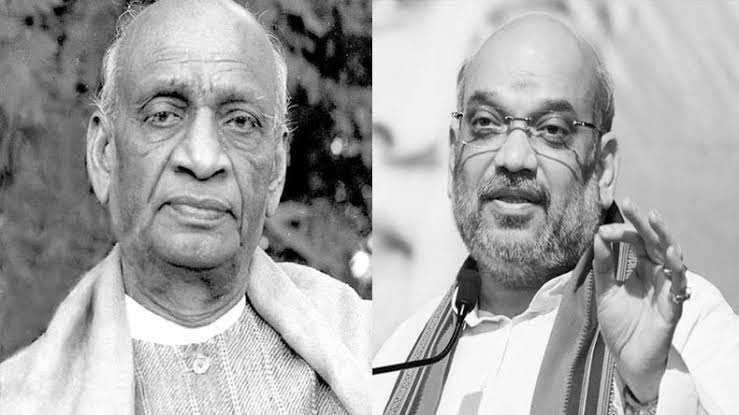 The passage of the contentious Citizenship Amendment Bill (CAB) in both Houses of Parliament has clearly set the cat among the pigeons. Love or hate the ruling BJP, the fact remains that the Opposition stands cornered, and badly. Especially the Congress which willy-nilly only ended up enhancing its image as “Musalmanon ki party” with its pseudo-secular arguments grounded in the misplaced belief that foundational principles of the Constitution lay shattered to smithereens.

None other than the party’s national president, Sonia Maino Gandhi, had once lamented at a Hindustan Times Summit that the saffron wave which sank the Congress in 2014 was in good measure due to the unrelenting propaganda that Hindus could no longer trust the grand old party of Independence. If that be the case, the Congress has only itself to blame.

In Amit Shah the country finally has a home minister who comes closest in matching the toughness and political skills of Sardar Patel, independent Bharat’s first HM. Firm, frank, focused, and fearless, he is everything an HM should be. Informally, an HM is deemed the number two in the cabinet, someone who can slip into the prime minister’s role in his absence or otherwise.

The Congress had over the decades reduced the HM’s position to a parody. Feckless men like Shivraj Patil and Sushil Kumar Shinde were nothing but glorified slaves of the dynasty who danced to its tune. The biggest damage to the chair was wrought by the out of jail Pallaniappan Chidambaram who flagrantly misused the HM’s chair (not to speak of the FM’s) to further the cause of spurious secularism.

Shah’s emergence as the leader most capable of stepping into the shoes of his mentor, Prime Minister Narendra Modi, is no longer a matter of debate and discussion. Cometh the hour, cometh the man. It can now be said with some certainty that he was inducted into the cabinet specifically to implement the BJP’s long overdue political agenda: banning triple talaq, abrogating Article 370, and passage of CAB as a precursor to the preparation of the National Register of Citizens (NRC). No prizes for guessing what’s next on his plate: the Uniform Civil Code. That may take a while given the ramifications of the task.

Regardless of the BJP’s loss of power in a few states, every party, ally or opponent is well aware that there will be a political price to pay for opposing CAB. Otherwise there is no way Bihar chief minister and JDU boss Nitish Kumar would have made a complete about turn and backed the Bill despite the risk to the party’s Muslim vote bank.

Also, for all its bravado and anti-Modi rhetoric, the Shiv Sena voted with the government in the Lok Sabha and walked out in the Rajya Sabha. Even the gadfly Arvind Kejriwal thought it wiser to play safe by backing CAB rather than risk losing the support of Hindu voters in Delhi where polls are due early 2020. Bengal CM Mamata Banerjee is the lone voice who has outwardly refused to budge from her old resolve to oppose the NRC. But the BJP’s sweeping gains in the last LS poll have chastened her. Gone is the choler and aggression of old. With the Bengal polls due late 2020, she knows the consequences of her mullah pleasing rants.

The ground level realities in Assam, however, are slightly more complex. This writer has ascertained from reliable sources in Guwahati that the anti-CAB protests and disturbances which rocked parts of Assam since the passage of the Bill have been orchestrated by trouble makers from a specific community to embarrass the government and influence public opinion, both internal and external. International TV channels like Al Jazeera and the BBC have been all too willingly lapping up the images of violence since it suits their anti-Bharat agenda.

Legitimate fear does exist among native Assamese on the long term implications of granting full citizenship to illegal immigrants from Bangladesh. Clause 6 of the 1985 Assam Accord specifically sought to assuage it with the words: “Constitutional, legislative and administrative safeguards, as may be appropriate, shall be provided to protect, preserve and promote the cultural, social, linguistic identity and heritage of the Assamese people.”

CAB’s extension of the cutoff year for availing citizenship from 1971 to 2014 has revived old fears of a deluge. Local BJP leaders like Himanta Biswa Sarma have been trying to pacify people with the palliative that not more than five lakh immigrants would end up joining the state’s citizenry; something the state can well afford without impacting its overall demography. But this does not take into account the fresh influx that could follow post CAB.

Apprehensions on this count, however, are far outweighed by the alarm over the disproportionate growth in Muslim population during the decades of minority appeasing rule by the Congress. Misgivings on CAB notwithstanding, most of the state’s denizens know in their heart of hearts that prolonged protests could push them from the frying pan into the fire. The Muslim population in Assam is well above 30 per cent. Ten of the state’s 27 districts are Muslim majority. CAB and NRC are the only weapons which can stem the invasion of foreigners.

The HM’s decision to ram CAB through Parliament thus has a goodly basis. Which is why no amount of fear mongering by the Congress and its secular allies seem to affect the ruling BJP. And even if the party were to suffer a few electoral reverses in some regional pockets, the loss, it is hoped, would be more than made up in Bengal and other states when the NRC is unleashed by the determined Shah of Bharat.