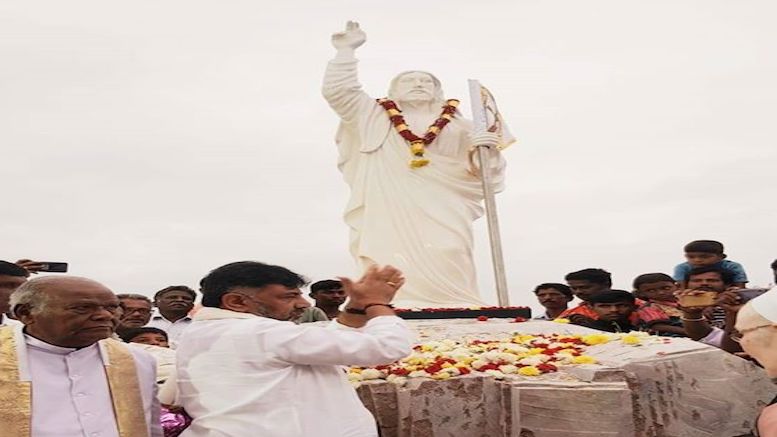 DK Shivakumar, Karnataka Congress MLA and previously a minister in the Siddaramaiah Government, handed over title deeds to a trust in Christian majority Harobele village in Kanakpura Taluk of Ramanagara district for constructing the world’s largest Jesus statue.

Shivakumar acquired 10 acres of Government land at Kapalibetta from his personal funds for this project. He along with his brother DK Suresh, MP (Member of Parliament) from Bengaluru (Rural) Loksabha constituency, laid the foundation stone yesterday on the occasion of Christmas along with handing over the title deeds to the trust that will oversee the construction of the statue. Member of Legislative Council (MLC) S Ravi and  functionaries of the trust like Chinnaraju were present on the occasion.

A non-profit body has raised questions on the way the land was acquired for building this statue, and termed it illegal encroachment of forest land.

Govt employees,ministers,politicians are involved. Long back lodged complaint in 2017. No action has been taken on illegal name change & land acquisition in Haarobele.@BJP4Karnataka#KapaliBetta which has now become YesuBetta. Its all preplanned.Protest to reclaim #KapaliBetta pic.twitter.com/BbTL6CiL7O

The Trust has taken up the task of constructing a 114 feet, including pedestal, tall hard granite Jesus Christ statue. Out of the 114 feet, 13 feet would comprise of steps that have already been built. Once completed, this would become the world’s largest Jesus Statue dwarfing the Christ The Redeemer statue in Rio Di Janeiro, Brazil. The Congress leader himself made an announcement in this regard through a social media post in which he was seen laying the foundation stone by worshipping the right foot of the model statue.

It is worth noting that Harobele village consists of over 90% Christians and they consider this as a Christmas gift from Shivakumar. While the villagers have thanked the MLA, Bharatiya Janta Party (BJP) leader Anantkumar Hegde has taken a dig at Shivakumar saying that the latter was funding the project “to impress Italian lady for party president’s post”. Shivakumar is out on bail in a money laundering case.

Congress has been at the forefront of protests against statues reflecting native Bharatiya icons like the Sardar Patel statue in Gujarat and Shivaji statue in Arabian Sea. Ironically, Christianity prohibits ‘idolatry’ i.e. the worship of physical images and statues.