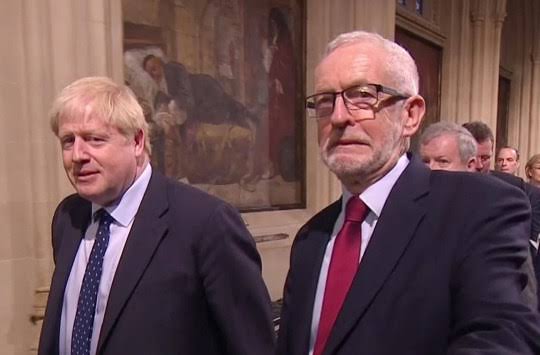 For conservatives there cannot be a more edifying spectacle than a knockout of hardened leftists and woolly headed liberals at the hustings. For what the Tories under Boris Johnson delivered to Labour in the 2019 UK polls is nothing short of sucker punch which left its reviled leader, Jeremy Corbyn, with a black eye and bloody nose. And deservedly! His anti-semitism and sympathy for Islamic terrorists cost him sizeable support though the election was about just one insuperable issue: Brexit.

Labour crashed to its worst defeat since 1935 by backing ‘Remain’, losing many of its traditional bastions in the Midlands and North. Codger Corbyn still had the gall to claim in a signed column for the Guardian, “We won the argument but didn’t convert that into a majority for change”. Much like Bharat’s Grand Old Party which ascribes its loss of power to the failure to effectively convey its message to the masses despite owning twin patents on morality and righteousness.

Come to think of it, neither Labour nor its Bhartiya cousin, the Congress, still understand why large swathes of voters do not trust either anymore. Ditto the Democrats in Donald Trump ruled America. Not for nothing have three of the world’s most prestigious democracies elected Rightist governments.

Like the abuses hurled at Narendra Modi, there is hardly a slight, slur, or slander in the book of insults not heaped on Trump or Johnson. Liberal pillars in the media regard the former Etonian and president of the Oxford University Union a shambolic, bullying, blustering, meritocracy-hating flippant figure with mendacity, hauteur, and raw ambition sloshing in his genes. Briefly put, a cross between a clownish charlatan and scoundrel unfit for national office. No portrait of Johnson is complete without compulsive references to his shaggy blond mop, the studied untidiness of his attire, sexual dalliances, and faked Falstaffian wit.

Trump, in comparison, is seen as a corpulent, spoilt, unpredictable, obstreperous, ugly-skinned oaf with a bad education. Presidents George W Bush and Ronald Reagan were slighted as intellectually deficient by egg-headed liberals fond of penning ponderous pieces in the Guardian, New York Times or Washington Post. While the legacy of Bush Jr. did get clouded towards the end of his second term due to the stock market crash of 2008 and the US involvement in a prolonged war in Iraq and Afghanistan, his crisis management in the wake of the 9/11 terror attack in New York was nothing short of masterful. It sent his approval rating skyrocketing to a record smashing 90 per cent.

Some good is embedded in the worst tragedies. So 9/11 brought about a restructuring of America’s national security apparatus with the passage of the Patriot Act (which Bharat would do well to emulate). It gave sweeping powers to the Federal government to deal with terror. This raised the hackles of the Liberals but insured America against another terror attack. Dubya’s innate nationalism made this possible.  At a personal level, his strong family values and sincerity always shone through despite the scorn he faced from liberals.

Reagan, on his part, was the quintessential Republican. Avuncular, inspiring, a cowboy at heart, the Great Gipper is still seen as the most popular Prez to have manned the Oval Office in the post 1945 era, a man Time magazine said missed greatness by a whisker. Reagan restored the greatness to the American Presidency both politically and economically. He cracked the whip on inflation, then at an all-time high of 13 per cent, cut taxes, upped spending on Defense, and won the cold war by securing Eastern Europe its freedom from the “evil Soviet empire” with the help of glasnost votary Mikhail Gorbachev. He was every bit the Hollywood hero he was in his early career. What he told wife Nancy after surviving an assassination attempt in his first term is unforgettable: “Honey, I forgot to duck.” Ronnie was an exemplar of courage and character. He made America feel secure and Right.

But back to Johnson. What his sweeping victory emphatically reasserts is that voters are ready to overlook the flaws of their leaders so long as they put the national honor above group or individual interest. Something Modi, Johnson, and Trump have in common despite their starkly different backgrounds. All three smelt the coffee fairly early. Changing public concerns helped them win voters’ trust.  A common thread runs through Johnson’s ‘One Nation’ Conservatism, Trump’s ‘Make America Great Again’, and Modi’s ‘Sabka Saath Sabka Vikas’. Their politics goes beyond tapping individual victimhood.

Peggy Noonan in her marvelous essay on Reagan summed it well: “A president doesn’t have to be brilliant; Harry Truman wasn’t brilliant, and he helped save Western Europe from Stalin. He doesn’t have to be clever; you can hire clever…You can hire the pragmatic, and you can buy and bring in policy wonks. But you can’t buy courage and decency, you can’t rent a strong moral sense.”

“A president must bring those things with him. If he does, they will give meaning and animation to the great practical requirement of the presidency: He must know why he’s there and what he wants to do. He has to have thought it through…”

Johnson tapped into voters’ angst on Brexit. Not many are aware that even the Queen is a passionate Brexiteer. Divisions on the issue ran virtually as deep as those between the Roundheads and Cavaliers in Cromwellian England. But the roles were reversed. Labour were the Cavaliers and Tories the Roundheads.

Remain versus Leave dominated discussions in homes and beer bars ever since the Referendum. Fear of mass immigration, global trade, cultural disintegration was the spur which brought Boris to power. Liberals of every hue were slaughtered with the LibDems reducing themselves to a joke: even the party head, Jo Swinson, was routed.

Tightening the laws of immigration, illegal or otherwise, be it Mexican in America or Bangladeshi in Bharat, is the touchstone on which future elections will be lost or won just as much as increased public spending on the poor by redistributing the country’s wealth. Manufacturing and housing will have to get back their long lost primacy to help generate jobs. Because the New Conservatism is no longer about protecting the rights of the privileged. Left-leaning economics is fine as long as long as it does not militate against the essence of the nation-state.

Voters in Bharat and America sent a clear message in 2014 and 2016. The same message has been driven through by the British electorate in 2019: ignore majority interests at your own peril, preserve your culture, and to hell with what others think. Just do it!