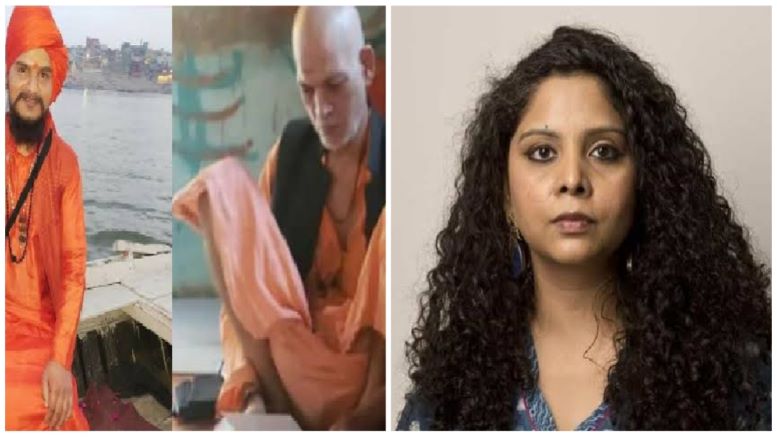 So called ‘journalist’ and social media celebrity, Rana Ayyub was recently marked for special treatment by the Navi Mumbai Police. The police took cognizance of the alleged threats she received on Twitter, after her tweet implicating soldiers in the murder of an elderly man in Sopore, Jammu and Kashmir. Inspector Abhijit Madke from the Kopar Khairane station called on Rana at her residence within two hours of her tweet alleging ‘death and rape threats’.

Mumbai police assured Rana of ‘swift action’ in the case. Inspector Madke, who visited Rana on the 3rd of July and collected ‘all the evidence’, informed controversial propaganda website The Print that he would begin the investigations on the same day after informing his seniors.

It is surprising that the same Maharashtra police, which was a silent onlooker while 2 sadhus and their Hindu driver were being lynched, acted with such alacrity the instant a known fake news peddler merely tweeted her complaint. This raises multiple questions.

Is the law different for ‘journalists’? Is the life of an ordinary citizen any less important? Does the police visit homes personally when Hindu women face online abuse, slander, threats and predation from Islamists & left-liberals opposed to their views?

Why was the police so eager to take cognizance of this incident without as much as prima-facie verifying the claims? The so-called Hindutvavadi party Shiv Sena and its Chief Minister Uddhav Thackeray have shown no inclination to speed up the Palghar case and have let the police intimidate ordinary citizens for the purpose of silencing criticism.

Same Police couldn't save life of 3 Sadhus in Palghar & but giving special service to Rana just after Twitter trollinghttps://t.co/CWsZrNJOVH pic.twitter.com/39NQar48Ms

Time and again Rana Ayyub has proved her ‘patriotism’ by tweeting against Bharat. Her hatred for Bharat and Hindus is visible in the venom she spews and fake news she peddles with the backing and cheering of the secular cabal.

Why should a ‘supposed’ journalist who takes pride in deriding one’s own country and army get preferential treatment in the Uddhav Thackeray regime which cannot assure the safety and security of ordinary citizens? Only recently the Mumbai Police had issued a notice to the mother of Mankhurd Hindu girl Karishma Bhosale for complaining against the use of a loudspeaker right opposite her house by a mosque situated around 100 m away.

#ArrestRanaayyub @RanaAyyub is defaming Indian Army again and again….and still no action against her pic.twitter.com/nevU6lbaQJ

Rana is an Islamist who knows how to peddle her anti-Hindu agenda in the name of journalism. She had fabricated the story of an Uber driver at the time of the Delhi riots only to play the ‘Islamic victim card’ and discredit a TV channel that was showing the sufferings of Hindus.

In 2015 Rana Ayyub wrote an article in DailyO in an attempt to blame RSS and Hindus for the rape of a nun in West Bengal giving a clean chit to Bangladeshis even before the rapists were caught. As it turned out, the convicts were actually Bangladeshis and Rana was left with egg on her face. But that did not deter her.

She had even attempted to make false allegations against PM Narendra Modi and implicate him in then Gujarat Home Minister Haren Pandya’s murder when the former was the CM of the state. She had spewed venom against Modi in her book ‘Gujrat files- Anatomy of a cover-up’, which was trashed by the Supreme Court.

From the Gujarat riots to the one in Delhi, Hinduphobe Ayyub has done nothing but concocted tales using her vivid imagination. Indeed her book was famously described as ‘titillating and fanciful account of her journalistic exploits in Gujarat’ by ex-IPS Sanjiv Bhatt.

While it is understandable that the Hindu-hating secular brigade would prop her up to target the current Central Govt. and Hindus, it is rather disturbing that a so-called Hindutva party like the Shiv Sena would rush to the aid of a propagandist for political points. It is especially disturbing because, it could neither ensure the safety of nor deliver justice to the Hindu victims of the Palghar lynching incident.

The Mumbai Police on its part needs to act swiftly on criminals rather than going after Twitter trolls. Rana Ayyub knows how to play the victim card for sympathy. Probably, it is part of the training regimen of Islamists.  Indeed, women on the right side of the political spectrum have often been trolled with vile abuses and threats in a much filthier language than Rana Ayyub can even imagine and one does not see them play the victim card.