Rahul Gandhi Zones Out When Asked to Describe His Kailash Mansarovar Yatra – Is this Man Fit for Office? A recent video shows Rahul Gandhi staring blankly and unable to talk coherently when asked by Congress leader Shobha Oza to describe his recent Kailash Mansarovar Yatra, during a Congress workers meeting in Bhopal on Monday.

See and hear for yourself! pic.twitter.com/ABXSRf3e03

Flanked by Congress leaders Jyotiraditya Scindia and Kamal Nath, Rahul Gandhi was asked by Oza ‘Your opponents keep asking – since when did Rahul Gandhi turn into a Shiv bhakt? So can you please tell our workers about some of the memories you gathered during your recent Kailash Mansarovar yatra?’

In response, Rahul Gandhi just stares with a far-away smile on his lips – he looks ‘zoned out’ and  unable to comprehend the question; as the Congress leaders around him look on in anticipation and appear increasingly anxious, Rahul Gandhi finally speaks up 18 seconds after the question is asked. He utters, “Kailash…..the Kailash mountain…Mansarovar” and then the clip ends.

This is not the first time that Rahul Gandhi’s inability to express himself coherently in a public or private gathering has been exposed. As a man aspiring for the highest office of the land, this basic inability to process information, draw on his experiences (if any) and address people’s questions and needs is a serious lacuna. It shows that bereft of prepared scripts or coaching by his handlers, Rahul Gandhi is incapable of independent thought and decision making of the level required for the office of PM.

This episode also brings in to spotlight the 2005 cable written by then US Ambassador to Bharat, David Mulford, in which columnist and political insider Saeed Naqvi (considered close to the Nehru-Gandhi family) is quoted as saying that Rahul Gandhi suffers from “personality problems” of an emotional or psychological nature that are severe enough to prevent him from functioning as PM. 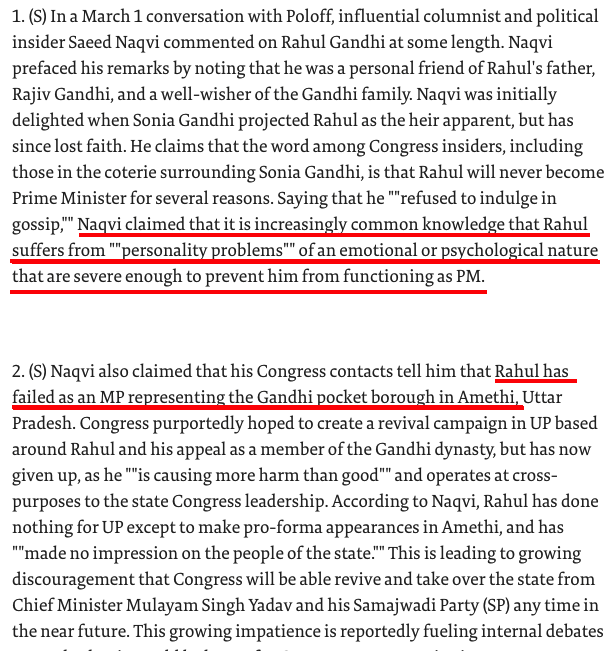 To his credit, Saeed Naqvi has still retained his doubts over Rahul Gandhi’ leadership, although he has never openly talked about the exact nature of the “personality problems” afflicting the Nehru-Gandhi scion and whether those problems still persist 13 years later. Of course, the usual dynasty cheerleaders in the Lutyens’ cabal are constantly trying to repackage Rahul Gandhi and palm him off to the unsuspecting masses.

Congress leaders like Capt. Amarinder Singh, Ajay Maken, Sachin Pilot and others who have the capability to emerge as effective leaders, surely know about Rahul Gandhi’s severe inadequacies. They have to answer to their own conscience as to why they are silent about accepting him as their Party President and projecting him as their party’s PM candidate.

But for any common citizen to still vote for Rahul Gandhi and the Congress party he leads, would be a gross blunder borne out of ignorance or malice. The nation simply cannot afford such a deficient person anywhere near the seat of power at such a crucial juncture.