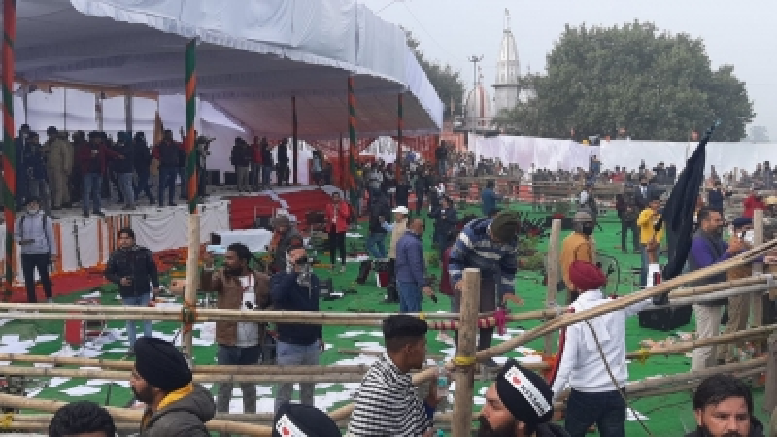 Hundreds of protesting farmers indulged in vandalism and violence at a ‘Kisan Mahapanchayat’ event near here on Sunday, just ahead of the arrival of Haryana Chief Minister Manohar Lal Khattar, forcing authorities to cancel the event.

As the farmers barged into the event venue, they broke through the barricades put up in front of the stage for security, smashed flower pots, tables and chairs put up on stage and nearby area. They also tore the banners and pulled out stringed flowers used to decorate the stage at the venue.

As the damaged furniture lay strewn, police preferred to remain a mute spectator. Before ransacking the meeting venue, the sloganeering farmers carrying black flags thronged a temporary helipad in nearby Kaimla village, where Khattar was scheduled to land, and damaged it. The agitating farmers broke through six checkpoints set up by police to reach the helipad. Earlier, tension prevailed in Khattar’s home district as police fired tear-gas shells, used water cannons and baton-charged the farmers headed towards the meeting venue to oppose the holding of the ‘Kisan Mahapanchayat’, through which the BJP-led government aimed to highlight the “benefits” of the three central farm laws.

At the ‘Kisan Mahapanchayat’ venue, over 2,000 farmers were present apart from a large number of officials and Cabinet Ministers when the protesters swarmed the site and vandalised it. The Ministers were later escorted by police to safety as chaos prevailed. The protesters left after vandalising the venue, with police preferring not to intervene.

The farmers associated with the Bharatiya Kisan Union (Charuni) have accused the Chief Minister of attempting to divide the farmers by holding such meetings. “What was the need to hold a ‘mahapanchayat’ when thousands of farmers have been sitting on the Delhi borders for the past 46 days to demand repeal of the three farm laws?” a protesting farmer asked.

Leaders of the BJP and alliance partner JJP have been facing protests for the last many weeks in Haryana. Recently, Khattar’s cavalcade was confronted by protesting farmers in Ambala. Congress General Secretary Randeep Singh Surjewala said that it was “shameful” that the Khattar government was stopping the farmers from attending the ‘mahapanchayat’.

“When you are holding a ‘mahapanchayat’, what is the point of stopping the farmers from going there? You are not concerned with the farmers,” Surjewala said in a tweet.

Favouring the holding of ‘Kisan Mahapanchayat’ event, BJP spokesperson Raman Malik told the media that “if the farmers have a right to protest, does the government not have a right to try to convince them?” He alleged that the protesters were instigated by Bharatiya Kisan Union President Gurnam Singh Charuni.