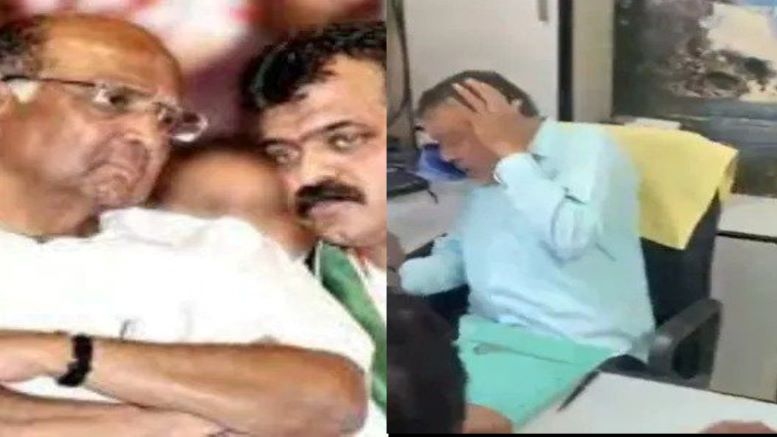 NCP (Nationalist Congress Party), of the ruling MVA (Maha Vikas Aghadi) dispensation, has shown what real fascism looks like. While freedom of speech (FoS) champions buried their heads firmly in the sand, NCP goons went on a rampage last week attacking opposition and getting citizens arrested for expressing their views.

On May 14, NCP hooligans bashed up BJP spokesperson Vinayak Ambekar for allegedly putting up a Facebook post that criticized Pawar. Pawar had made a remark derogating Hindu deities by calling himself ‘father’ of Hindu deities. He conveniently used a poetry by Jawahar Rathod to make the comment.

Pawar’s comments angered Hindus and Ambekar’s original post had supposedly criticized the former. However, later Ambekar modified his post and clarified that he was editing his post. “Last two lines in my poem were written by mistake. There was no bad intention behind writing those lines. But my leader Girish Bapat has conveyed to me that people’s feelings are hurt due to this. I apologize to those whose feelings are hurt”, his edited post read.

“I am tired of setting people on fight with each other, but I am yet not content. I held a post for a long, but could not do anything. I am just a gossiper, no one calls me father. I myself say that I am a father because there is no contentment in my heart. My nephew and my grandson, both don’t listen to me”, reads the poetry posted along with the edited post.

“In the video of this incident, it is seen that Vinayak Ambekar who was sitting in his office was visited by a group of NCP goons to ask him a clarification about his Facebook post. Though Vinayak Ambekar was answering them patiently and was about to give an explanation, an NCP goon slapped him on his face”, noted OpIndia.

Marathi actress Ketaki Chitale was arrested on May 14 and sent to judicial custody till May 18 on charges of posting ‘derogatory’ remarks against Sharad Pawar. A case was filed against her under sections 500 (defamation), 501 (printing or engraving matter known to be defamatory), 505 (2) (making, publishing or circulating any statement, rumor, or report promoting enmity, hatred, or ill will between classes), 153 A (spreading disharmony among people), of the Indian Penal Code.

“Ketaki Chitale was arrested for sharing a critical post written by Advocate Nitin Bhave. The post, which was in Marathi, made no direct mention of the NCP chief’s full name and mentioned the surname of Sharad Pawar and the age of 80. It is worth noting that the NCP patriarch is an 81-year-old octagenarian”, reported OpIndia.

NCP leader Jitendra Awhad had Nashik youth Nikhil Bhamre arrested for his social media post. Awhad had demanded action against Nikhil for allegedly criticizing Pawar. “It is time to create a Nathuram Godse of Baramati for a ‘Gandhi’ of Baramati. Uncle, do apologize”, Nikhil had tweeted. Following this, Awhad tagged police officials and demanded strict action against the youth.

“After Jitendra Awhad’s tweet, the Dindori police in Nashik tracked down the 21-year-old youth Nikhil Bhamre, a pharmacy student with no prior criminal record. He is booked under sections 153A, 500, 501, and 506 of the Indian Penal Code. He was arrested from his rented accommodation in Nashik. He is from Dindori and belongs to a farmer’s family and was living in Nashik to pursue his studies”, said the OpIndia report.

While the left-liberal media and ‘activists’ never tire of calling PM Modi and BJP ‘fascists’, they have given a free pass to actual fascists – be it Arvind Kejriwal-led AAP (Aam Aadmi Party) sarkar or Uddhav Thackeray-led MVA sarkar. The newly-elected AAP government in Punjab had formed a Special Investigation Team (SIT) to probe his tweets agaisnt the Delhi CM.

These aren’t lone instances of MVA’s fascism and muzzling voices opposed to their point of view has been par for the course in Maharashtra ever since the unholy trio of Shiv Sena (SS), NCP, and Congress have joined hands.

Here are some instances of MVA hooliganism:

1) Numerous instances of violence by MVA in general and SS and NCP cadres, in particular, came to the fore during the ruling coalition’s bandh call last October.

2) Last September, Abhijeet Limaye, the admin of FB (Facebook) page Lakhoba Lokhande, was arrested by the Pune Police Cyber cell on the basis of the complaint by NCP workers for supposedly posting ‘offensive’ comments against MVA leaders. MVA workers blackened his face as Pune police brought him to the court and forced him to issue an apology stating he wouldn’t comment against MVA.

3) September 2020 – Navy veteran assaulted for sharing WhatsApp (WA) forward alleging ‘derogatory’ depiction of CM Uddhav Thackeray. What can be more shameful than workers of the ruling MVA dispensation being punched in the eye because he shared a cartoon depicting Thackeray’s reality?

5) February 2021- BJP leader Satish Katekar assaulted in Pandharpur for raising his voice against inflated electricity bills. Katekar was forced to wear bangles (considered a sign of weakness by misogynists) and a saree was draped around his head. He was paraded in public and the goons sloganeered in unison.

6) August 2021 – BJP leader Kirit Somaiya who has been systematically exposing the corruption of the MVA government was attacked as stones were pelted and black ink was thrown on his car in Washim.

7) December 2019 – Wadala resident Hiramani Tiwari was physically assaulted and his head was shaven by Sena goons for his comment against Uddhav Thackeray.

8) August 2021 – Union Minister Narayan Rane was taken into custody in a display of highhandedness.

9) May 2021 – Pradip Gavade, Secretary of BJP’s Yuva Morcha was taken into custody by the Bandra Police Cyber Cell from his Pune residence for allegedly criticizing NCP Supremo Sharad Pawar and his grandson Rohit Pawar. Gavade was booked under sections 295A, 500, and 505/2 of the IPC as well as IT Act 67. Gavade was later released.

Despite numerous such instances of high-handedness, freedom of speech champions are yet to remove their heads from the sand. May be we are expecting too much from the Hindudveshi (Hindumisia) cabal that believes only pseudo-seculars have freedom of speech and expression.