Hooliganism and violence during MVA-invoked Maharashtra bandh over Lakhimpur incident 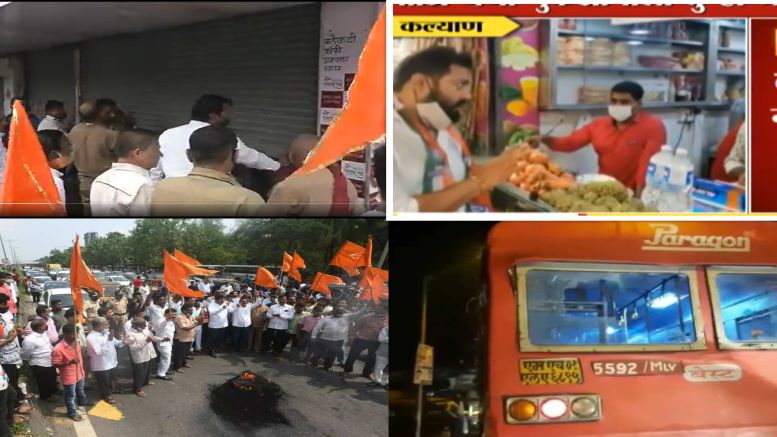 Even as MVA (Maha Vikas Aghadi) claimed ‘public support’ for its Maharashtra bandh call, the ground reality appears to be far from such claims of voluntary support as made by NCP’s Nawab Malik. Video evidence suggests that the ruling coalition members are resorting to ‘hooliganism’ to enforce the bandh.

The ruling coalition had given Maharashtra bandh calls allegedly in support of protesting ‘farmers’ and to condemn the Lakhimpur incident. Ironically, parties who call citizens from UP ‘outsiders’ and have even resorted to violence against them have want Maharashtra to be shut down for an incident that occurred in UP and is currently being probed.

News reports have also emerged alleging MVA workers threatening shop owners to shut their shops or face the consequences. As per a Zee24Taas report, local Congress leader Sachin Pote supposedly told shop owners that if they refused to comply then they would themselves be responsible for any loss they have to incur. The report also shows NCP workers ‘requesting’ shopkeepers to close down.

A video purportedly from Mumbai’s express highway at Vikhroli shows tyres being burnt and slogans being raised supposedly by Shiv Sena workers. They have also blocked the Eastern Express highway confirms a TOI report.

There have also been instances of auto-rickshaw drivers, who are dependent on day-to-day earnings, being beaten up and harrassed by MVA workers in the name of bandh.

BEST has also claimed that eight of its buses have been vandalized between midnight and 8 AM today forcing it to go off road. BEST has sought police protection to enable it to resume services.

In the meanwhile, Mumbai-based lawyer Atal Bihari Dubey has written to Bombay HC Chief Justice Dipankar Datta asking the latter to take suo moto cognizance of the Maharashtra bandh called by the ruling MVA terming it illegal. In his plea, he has also pointed out the inconvenience caused by the bandh to citizens who are already struggling to survive on account of the pandemic.

Even though the ruling coalition states that it wants the ‘farmers’ voices to be heard, the Congress-NCP combine with whom Shiv Sena has now joined hands, is itself guilty of mistreating the farmers and opening fire at unarmed protesting farmers in what can be termed Jallianwala Bagh style to borrow Sharad Pawar’s term.

“This is a ‘Bandh Sarkar’ having stopped all schemes, all aid to farmers. During Covid-19 when the whole country was open, it kept Maharashtra closed. Today, when small traders, shopkeepers are somehow opened for business, it is using police, GST officials and various agencies to enforce the bandh and this is a form of state sponsored terrorism” said Leader of Opposition Devendra Fadnavis.