The 2014 elections delivered what many considered a virtual impossibility in ‘secular’ Bharat – a simple majority for the ‘communal’ BJP. The historic win for BJP was a combination of factors – the mega-corruption scams during UPA rule, disgust over a dummy PM remote-controlled by the Nehru-Gandhis, anger at the Lutyens’ cesspit involving media, crony capitalists, politicians and intelligentsia, and the governance track-record & personal charisma of Narendra Modi. EDIT: And the game-turning element was the pro-Hindutva image of Modi which charged millions of BJP cadre and apolitical Hindus to work day & night for his election campaign.

It was the perfect alignment of stars, so to speak, and took the country’s liberal-secular establishment completely by surprise. The advent of Narendra Modi, a complete outsider to Delhi, offered hope that the country would finally break free and move beyond the cliches and attitudes imposed by the ruling elites to suppress the true spirit of the nation.

But while Modi’s rule has disappointed for failing to address most Hindu concerns (due to a combination of factors – some in his control and others not so much), one thing is clear – the last 4.5 years have witnessed the stiffest challenge ever posed to the secular establishment in independent Bharat. Modi has refused to entertain both the Lutyens’ coterie and his own core supporters, but his benign neglect has at least allowed Hindus the breathing space to finally develop a basic counter to the dominant left-liberal narrative.

Apart from the Lutyens’ cabal, other anti-Hindu forces – Islamists and Christian missionaries – have also identified the Modi Government as their enemy # 1 despite the Modi government doing nothing to end the pro-minority skew in education (RTE etc) and in fact further bolstering the minoritarian scholarship and other schemes launched by UPA-1.

We can only assume that the generic steps taken by the Modi Government to check terror, hawala money laundering, dubious foreign NGOs with missionary connects, and the bare minimum show of intent to check illegal immigration – a chequered NRC process in Assam, political rhetoric against illegal Bangladeshi Muslim and Rohingya immigrants, gradual progress in fencing the Indo-Bangladesh border –  has set the alarm bells ringing among hardline Islamic & Christian organizations who operate with a long-term worldview of at least the next 30-50 years.

With that in mind, a vigorous but low-key campaign has been launched by apolitical Muslim religious groups to ensure that Narendra Modi is defeated in the 2019 LS elections, and whatever hopes he has rekindled in the Hindu mind are completely snuffed out. The Christian church, with their sophisticated international backers and deep connects in India’s English-language MSM, has anyway been running this campaign since May 2014 in the guise of ‘rising intolerance’, ‘Christian persecution’ etc.

The signs are clear to anyone who has the ability to read between the lines. Here are some examples from the past few weeks –

1.) Massive ijtema (a Muslim religious congregation) in Bulandshahr, UP  organized by fundamentalist Sunni organization Tablighi-Jamaat from 1-3 December. Around 15 lakh Muslims from 56 countries (Bharat, Pakistan, Bangladesh, Saudi, China etc) gathered in this ijtema, as per this video summary. 8000 jamaats (smaller groups) consisting of 1 lakh volunteers have spread out across the country to spread the conclusions of this gathering across Bharat. 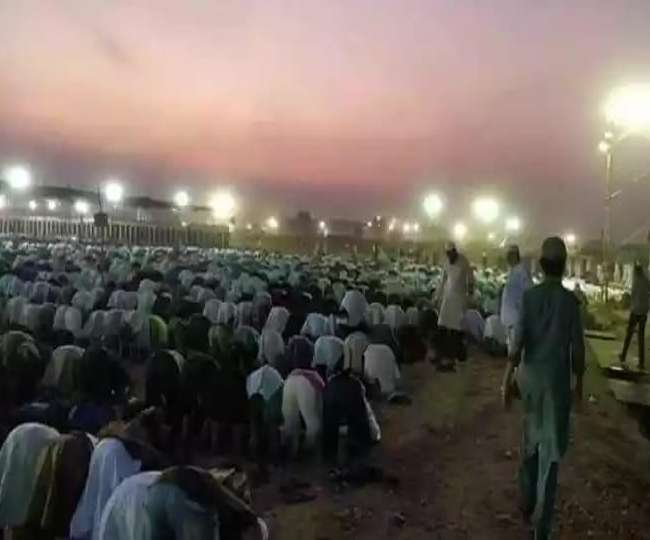 This staggering ijtema has flown almost completely under the radar, compared to the front-page  ominous coverage given to the VHP-organized gathering of ~ 1 lakh Hindus in Ayodhya

2.) Muslim gathering in Bengaluru, Karnataka – this one was full of Muslim victimhood narrative, the timeless ‘Islam khatre mein hai’ (Islam is in danger) clarion call, and outright anti-Modi chanting.

A lady in an FB group has posted this photo of a Muslim gathering that she watched from the balcony of her apartment in Bengaluru. On loudspeakers they talked for 5 hrs about wrongs Muslims hv faced in Kashmir, Godhra, Babri, Bulandshahar, Triple Talaq etc. (1) pic.twitter.com/mmCA0r5vPG

The gathering ended with a call: "If you want to save Islam, Quran, and Muslims then you have to stop Modi otherwise you will go to hell." This was followed by chants of "Narendra Modi Murdabad". (2)

When the lady expressed discomfort in her community WhatsApp, she was asked to maintain tolerance and respect for the secular fabric of India. She says the Hindus in her Bommanahalli apartment were silent as though they had not heard or seen anything. (3)

4.) This video shows a Muslim cleric praying at a Muslim saint’s shrine along with Congress President Rahul Gandhi, where the cleric praises Gandhi for not desiring wealth and instead working tirelessly to defeat the sectarian/communal powers (read BJP) and to establish ‘peace’ all over Hindustan once again.

Last try to get video pic.twitter.com/ms3DlS4XRu

5.) This video from Balapur, Hyderabad (an AIMIM & Owaisi stronghold) shows a Muslim man (political party worker?) explaining to what appears to be an illegal Rohingya immigrant about how he has to say that he is from India and the Telangana government will assist him in  obtaining an Aadhar card so that he can become a registered Telangana voter (he stresses repeatedly on the voter part). The other person says he has heard that one needs to be an Indian citizen (for Aadhar), but he is cut off by the first man who assures him that our Chief Minister’s policy is different. Suddenly realizing that someone is recording the conversation, he orders to stop shooting.

6.) The recent state elections have provided a dry run in the lead up to the LS 2019 elections.

A senior journalist told me that the role of the major minority community in the recent state elections is being underplayed. He told me that Deobandis motivated the entire. community to vote enmasse for Congress, which finally became the decisive factor in the party's victory.

As it is, Muslims voting percentages are very high, often double that of Hindus. Assuming Muslims and Christians constitute 20% of the electorate and register 90% turnout, while Hindus & other Dharmics who are around 80% of the electorate register 50% turnout. It means that Congress already has a head start with 18% vote share in kitty and just needs 12% out of the 40% Hindu voters who turn out on election day to beat Modi & BJP. Add to that the regional parties which will only cut into the BJP voteshare, as per pre and post poll alliances worked out with Congress.

The 2019 elections are set to witness a mass mobilization of Muslims not witnessed for any election since the 1946 provincial assembly elections. Hindus have several legitimate grievances with Modi and BJP, but they need to ponder why anti-Hindu forces are itching to get rid of him so badly, and then decide whether they want to waste their vote or cast it in favor of someone whose presence gives them a fighting chance to materially empower poor Hindus and raise Hindu consciousness.

Two edits have been made in the article based on feedback from readers.