Maridhas Vs DMK: the sham of liberals’ freedom of expression exposed 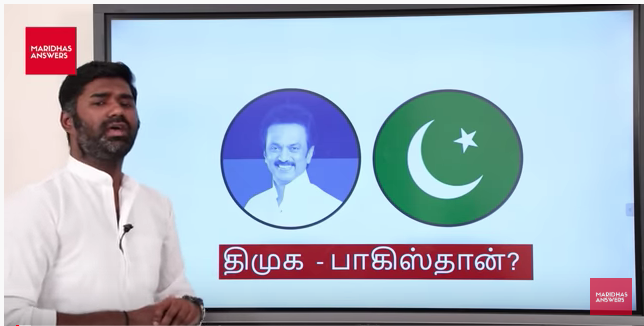 Article 19(1) (a) of the Constitution of Bharat states that “all citizens shall have the right to freedom of speech and expression”. This right is granted to all citizens without exception and with reasonable restrictions.

Liberals do not miss any opportunity to impress upon the people this right granted by the Constitution. More so during this era of Social Media (SM) where views are expressed freely as it gives a sense of security and even anonymity. However, freedom of expression is a one way street according to liberals who can neither accept criticism nor listen to views contrary to theirs.

The case of Maridhas, a SM user and YouTube activist, is a good example of how liberals who shout from the rooftops about ‘freedom of speech’ never extend the same courtesy to their ‘political opponents’.

Maridhas is a nationalist from Madurai, Tamil Nadu who has been in the forefront exposing anti-Hindu forces including Periyarists, separatists and the conversion mafia. His YouTube videos are a treasure trove of knowledge on the nexus between Dravidianists and anti-national elements, how the conversion mafia operates and many such issues which relate to the polity, security and development of the country. He addresses issues in a detail and logical manner, explaining things in a very simple manner.

So what has irked the DMK? Much like its ally Congress, DMK is incapable of accepting criticism. There have been instances in the past when the party has silenced journalists through intimidation, harassment and even by murdering them.

What has caused distress to DMK is Maridhas’ video titled ‘Is DMK influenced by Pakistan?’ In this video Maridhas has provided proof of how Pakistan’s media echoes DMK’s stance. Further, he exposes how funds have been entering TN through hawala so as to encourage separatism in the state much like how separatism has been propagated in Jammu and Kashmir.

Fearing that their game will be exposed and eventually they may lose public support, DMK has rushed to the police to file a case against Maridhas alleging that he is trying to cause ‘communal disharmony’. As we have said earlier, DMK doesn’t take criticism well and is known to silence critics, violently if necessary, so their filing a police complaint doesn’t come as a surprise.

However, DMK has forgotten that this is the age of SM and they cannot continue with their arm twisting ways anymore. The news of their police complaint was greeted with #ISupportMaridhas hashtag on Twitter. SM users have come out in full force supporting this lone warrior which should serve as a reminder to bullies like Congress, DMK, communists and liberals who pretend to be champions of ‘free speech’ but assume that free speech is their sole preserve.

Tamil Nadu has been suffering from Tamil nationalism and regionalism for quite some time now. In such a scenario the youth need to be guided properly and Maridhas is doing a great job of exposing #BreakingIndia forces with proof.

Some important topics he has dealt with include Rafael deal, Sterlite protests, HRCE & Dravidian Politicians’ nexus which is facilitating the loot of Hindu temples, and many other such topics that are a must watch for Tamil people in general and youth in particular, because they would then be able to make an informed choice and also learn how anti-nationals are emotionally blackmailing them so that they can continue looting them and take them away from their Hindu roots.

Conversion has been a big problem in Tamil Nadu and the conversion mafia has run amok, especially Christian missionaries with overt and covert support from the administrative machinery. Maridhas has exposed the nexus between DMK and Christian missionary mafia that allowed the latter to accumulate huge amounts of wealth.

We need to stand by activists like Maridhas who are exposing the anti-Hindu and anti-national stance of Dravidian politicians. People like him are resisting the Tamil separatist movement that threatens to break the state of TN from its civilizational roots & the rest of the country.