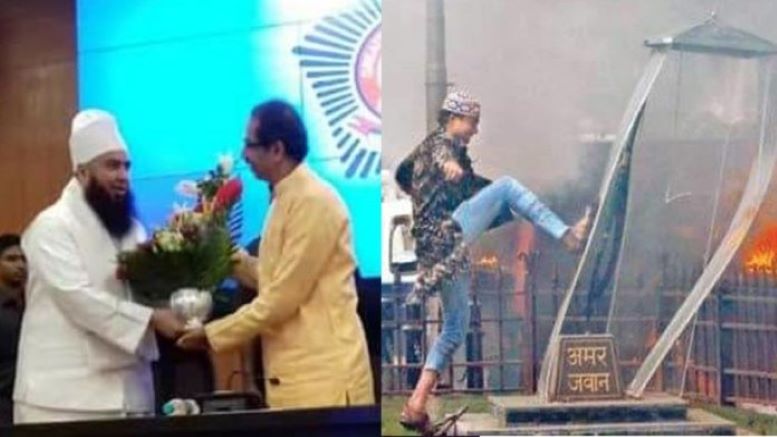 Taking cognizance of a complaint lodged by the Islamist Sufi group Raza Academy of Mumbai, Maharashtra’s Home Minister Anil Deshmukh has written to the central government requesting it to ban the upcoming OTT (Over the top) platform movie “Muhammad the messenger of God”.

Sharing a copy of the letter on his Twitter page, Anil Deshmukh writes “Raza Academy has drawn the attention of the Maharashtra government towards the release, through social media/over the top platforms, of a movie titled Muhammad the messenger of God that hurts the religious sentiments of one particular community and would create religious disharmony in the society. Taking note of the complaint in my capacity as the Home Minister of the state, I request the Ministry of Electronics and Information Technology to take action under the Information Technology Act, 2000, and ban the film set to be released on 21/07/2020.”

Raza Academy is a hard-line Islamist organization, often in the news for issuing fatwas that designates itself as an organization set up to promote Sufism. It was involved in the 2012 Azad Maidan Riots where several Muslim organizations under its leadership had gathered in the name of protesting against ‘atrocities on Muslims’ in Myanmar.

In the ensuing violence under the benevolent gaze of the then Congress-NCP govt, the Amar Jyoti Jawan memorial dedicated to martyrs of the 1857 War of Independence was vandalized by Islamist mobs. In addition, 2.72 crores rupees worth public and private properties were damaged, women cops were molested and stabbed, news vans were vandalized and journalists were attacked.

Police investigations into the riots led it to Raza Academy as the body which instigated the riots. Crime branch investigations, based on more than a thousand witnesses, indicted it and the organization’s Saeed Noori was ordered to pay around Rs. 3 crore damages which he refused to pay, and as of 2018 the Bombay High Court had quashed the demand notice issued against Noori and passed the buck back to the district collector.

According to Founder-President Saeed Noori, Raza Academy provides a platform for the Muslim Youth to “express their anger”. Its political links have been saving it from concrete action to this day.

Even earlier this year they had met Maharashtra CM Uddhav Thackeray to apprise him of the concerns of various Muslim organizations with regard to the CAA and NRC.

This decision to request a ban on an award-winning Iranian movie is in keeping with Maharashtra Government’s secular moves where it orders Hindus not to celebrate their festivals freely but bends the rules and requests Muslims to resort to symbolic celebrations ‘if possible’.

Recently two devotees of Chhatrapati Shivaji Maharaj were booked for taking the ruler’s paduka to Pandharpur as per customs during Asadha Ekadashi. The Maharashtra government has also issued several guidelines for the upcoming Ganesh Chaturthi.

All rules and regulations and step-motherly treatment seem to be reserved only for Hindus while Muslims are given a free hand and treated with kid gloves. Maharashtra government has become adept at passing off appeasement as secularism.

The latest update, as per far-left propaganda site The Wire, is that the attempts to ban the movie seem to have succeeded despite it being a hagiography and adhering to all Islamic restrictions around representing the prophet of Islam.

Any visual representation of Islam’s prophet Mohammed is impermissible as per Sharia Law. In 2012, the short film Innocence of Muslims deemed critical of Islam caused global riots which left over 50 dead and hundreds injured, including violent protests outside the US Consulate in Chennai. A 2006 cartoon depicting Mohammed in the French satirical magazine Charlie Hebdo led to an attack 6 years later killing 12 magazine staffers. In 2015, two attackers were killed and a security guard wounded outside a “Draw Muhammad” contest organized by a free speech group in Texas, USA.

Incidentally, Netflix has also cancelled its latest Turkish drama original ‘If Only’ amid pressure from Turkish government authorities who wanted the removal of a gay character. It appears that all liberals, secularists, creative types and freedom of expression activists seem to lose their voice when it comes to Islam!