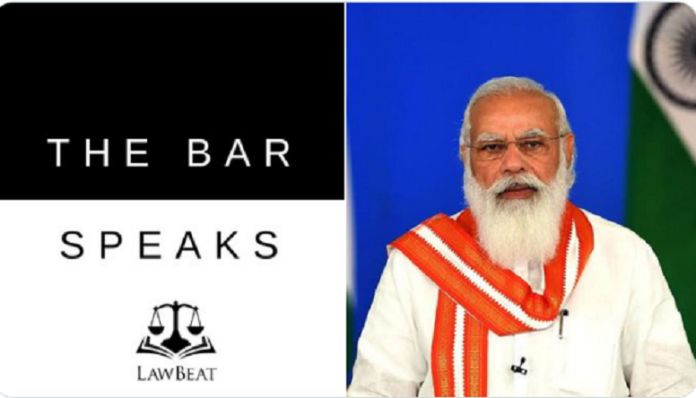 Yesterday, the Prime Minister of India, Shri Narendra Modi stated it has come to light, that issues of violation of human rights are being raised selectively by some people purely for political benefits. He also added that Rights are Synonymous with duties. What does the Bar think?

Sr. Adv. Satish Maneshinde: “People who are now crying hoarse about human rights & violations of basic rights, raids being carried out, PMLA cases being foisted, are those who were part of government & administration when Emergency flourished – the Congress party & others.”

Same people who were in power (during emergency) after having violated basic human rights of various individuals, cannot be complaining of violations of human rights, particularly when they say that government is “high handed” & raiding opposition leaders!: Maneshinde

“Wherever I have seen these raids taking place, they have resulted in criminal cases being filed, PMLA Cases being filed, chargesheets being filed, many are locked up!This is because of the judicial system, not because government is trampling upon their rights!”: Satish Maneshinde

The Government is now providing basic rights to people, this was a far-fetched reality in 70-75 years after independence. People now have access to basic amenities. This is why the PM says it was a “collective violation of human rights”: Senior Advocate Satish Maneshinde

“The ones who are crying hoarse are those who violated the basic human rights of individuals all over the country after independence. So, I’m fully in support of what the government is doing – it is providing basic rights, basic human facilities”: Senior Adv Satish Maneshinde

“I completely agree with the PM. Selective outrage is the raison d’être of opponents of govt. They know that they are cutting their nose to spite their face but their hatred for the Govt consumes their reason”: Additional Solicitor General of India, Vikramjit Banerjee

“…That’s (selective outrage) a sad thing because it reflects badly on the political tone & conversation which is the basis of a healthy democracy and the rule of law.”: Additional Solicitor General of India, Vikramjit Banerjee

“Activism has always been selective because what outrages one person may not evoke the same feeling from the other. Like if bare text of the Constitution at the relevant time is considered – There is nothing wrong with ADM Jabalpur.”: AoR Amit Pai, Supreme Court

“…Human rights have to be given liberal interpretation. Every Govt is going to be in conflict with rights. The basic human rights. It’s for the courts – in my view – to prevent infractions of basic rights.”: AoR, Amit Pai, Supreme Court

“In India no one takes it seriously when international media organizations say there is a Human Rights violation. There is no doubt that, Human Rights is being used as a tool of politics.”: Niranjan Rajagopalan, Advocate (Madras HC)

“But this has only resulted in activists and media losing credibility and not the Indian State. However, within all that, one mustn’t fail to reflect upon allegations and seek to improve the standards of law enforcement”: Niranjan Rajagopalan, Advocate, Madras High Court

“While the issue of selective approach to human rights is a real issue, larger issue is whether Bharat has the agency & right to fashion its own discourse on human rights without being saddled by patronizing expectations from the West in name of a universal standard”: Sai Deepak J

“While I understand that it helps to have a common minimum code on the subject (of Human Rights)it cannot be unilateral & it certainly cannot come at the expense of our cultural agency as an independent society with its own rich legacy of ethics and morality”: Sai Deepak J

“Constitutional institutions, in particular those that are tasked with being watchdogs of Constitution, end up coming across as both colonial & selective in their approach to human rights”: Advocate Sai Deepak J

“Selectiveness evident in Constitutional courts: post poll violence in Bengal & public lynching of Palghar Sadhus, both of which happened in presence of & with connivance of State police officials, warranted suo motu cognizance by the highest Constitutional Courts”: Sai Deepak J

“Unfortunately,that (taking suo motu cognisance of post poll Bengal violence, Palghar Lynching) was not the case despite Constitutional Courts showing an increased tendency to do so in relation to incidents of similar nature as well as on matters of executive policy”: Sai Deepak J

“Selective activism is writ large in our country. We did not hear any voice raised when a muslim chopped off the arm of a Hindu professor in Kerala nor when Hindus were lynched and their properties reduced to ashes in Murshidabad”: Senior Advocate Gopal Swarup Chaturvedi

“There is a connection between protests & political advantage believed to flow from it. Till date, no human rights champion has undertaken or protested trampling of rights of 1000’s confined in jails across the country without a hearing”: Sr. Adv. Gopal Swarup Chaturvedi

(This article has been compiled from the tweet thread of @LawBeatInd)