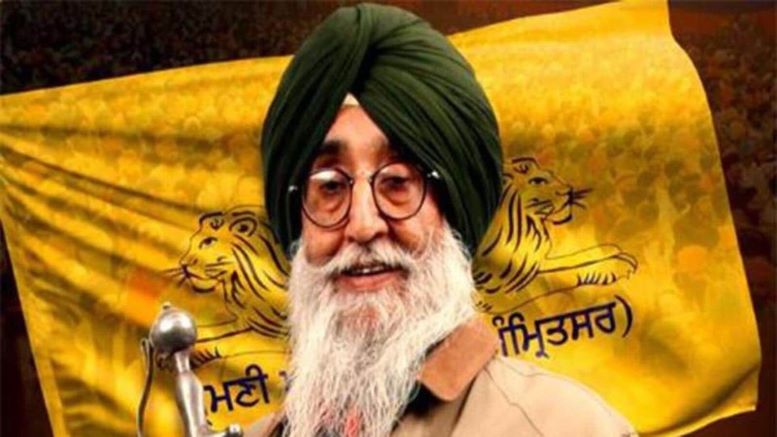 “A newly elected MP has disrespected the sacrifices of legendary martyr Shaheed Bhagat Singh, who laid down his life for the country’s independence,” Hayer told the media here.

A day earlier, Shiromani Akali Dal (Amritsar) MP Mann, a Khalistani supporter, triggered a controversy by saying, “Try to understand, Sardar Bhagat Singh had killed a young English officer. He had killed an Amritdhari Sikh constable, Channan Singh. He had hurled a bomb into the national assembly at that time. Now, tell me whether or not Bhagat Singh was a terrorist”.

A person initiated into the Khalsa according to the rules laid down by the tenth Guru is known as Amritdhari Sikh.

According to this report:

…The first nine Gurus did not conform to that nomenclature. They had names such as Dev, Das, Rai, and Kishen. They may or may not have grown long hair, and there are no records of what calendars and art portrayed the Sikh Gurus depict. The changes in Sikh philosophy – the followers taking up arms – came in with Guru Hargobind, the sixth Guru. Guru Gobind, the tenth Guru, introduced the codification in attire and the five articles of faith.

Guru Gobind bequeathed the Sikh holy book, the Guru Granth Sahib, as the immortal Guru to the followers who by now had become a community – Khalsa. The Holy Book does not define the Sehajdhari, Keshdhari, or Amritdhari Sikh.

Mann was involved in protests against Operation Blue Star and was in jail between 1984 and 1989. He was charged with sedition and waging war against the state. According to Pramod Kumar, Chandigarh’s Institute for Development and Communication’s director, Mann’s victory reflects the resurgence of Akali politics with dominant shades of radicalism.

“Religious fundamentalists hate him (Bhagat Singh) because he talked of a secular-socialist perspective. There have been unsuccessful attempts to prove that he became religious when the end was nearing. Now it is the other way around. They are trying to prove him shallow and cowardly, but the documents regarding their cases, his own writings are all there to prove them wrong”, says Prof Chaman Lal, honorary advisor to Bhagat Singh Archives and Resource Centre, Delhi Archives.

Harjeshwar Pal Singh, Assistant Professor of History at Chandigarh’s SGGS College, stated that the Punjab government ‘co-opted’ Shaheed Bhagat Singh in the 1980s. “He is a big symbol for the people, both in Punjab and the country across ideologies. These people want to replace him. He doesn’t suit their ideology. Bhagat Singh is still popular as a symbol of the sacrificial tradition of Punjab against tyranny. Moreover, he was on the right side of history, fighting against the British, while Mann comes from a feudal background whose ancestors sided with the British. Bhagat Singh’s sacrifice cannot be negated”, he added.