The public should know the antecedents of a person before voting him to power. Usually when one gets hold of the position of power, it is very likely that he will trample on his inner values. The best example before us now is the Delhi Chief Minister Arvind Kejriwal who climbed the ladder of success with the strength of his holier than thou attitudes. He was seemingly a man of principles who would never compromise on any unlawful activities. Corruption was what he vehemently condemned and promised to weed out if he would come to power. 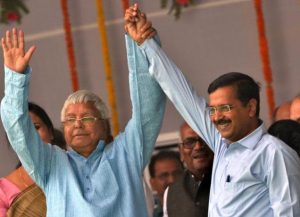 At the top of his voice he had blasted all those leaders who were corrupt and had looted the nation. His activities had certainly given sleepless nights to Sonia Gandhi, Sheila Dixit, Lalu Prasa Yadav, Mulayam Singh Yadav, P Chidambaram, Kapil Sibal, Mayawati, etc al. The general people were too glad that they had a leader who gleefully went around in an auto-rickshaw and spoke the language of hard austerity. He asserted that he would stop at nothing for the sake of the country. He convinced the public that he would leave no stone unturned to improve the living status of the underprivileged.  This is how the AAP Chief became the darling of the masses.

Well, when the country is plunged into the mire of corruption the people certainly wished for such leaders with high ethical values. They want leaders who genuinely work for the country and can also deal a mighty blow to those who are involved in any kind of unfair practices.

But sadly enough, now we see just the opposite. After a few months of “nautanki” he willfully raised the salary of the MLAs by a whopping 400%, beside considerable hike in a number of perks. Is it not against what he stood for? Is it not a total betrayal of the public trust?  The Chief Minister of New Delhi never gave a second thought before giving a warm hug to the notorious Lalu Prasad Yadav who has one of the worst name in the annals of corruption in the country. Is it not an unethical U-turn? Well, Sheila Dixit’s misdeeds are fully erased from his memory now. He virtually made a clean break from the campaign against the Congress’ misrules and its immeasurable corruption. This holy AAP Chief is now battling for the depraved AAP MLAs whose dirty deeds stink to high heaven – many of them are already arrested. 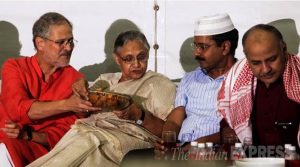 What’s more? He lost his sanity a few weeks when his principal secretary and other officers were arrested allegedly on the charges of bribing and misuse of the power of office. Still more dangerous is that Mr. Kejriwal is too quick to favor a certain section of NGOs/student bodies whose roars might send a tremor through the integrity of the nation. He speaks in any tones, any rhymes and for any one if that ensure the political dividend for his party. Adding fuel to fire is his main forte.
Liked It?
Support Hindupost
Share
Facebook
Twitter
WhatsApp
ReddIt
Telegram
Print