Kashmir in the Grip of Pakistani Conspiracy 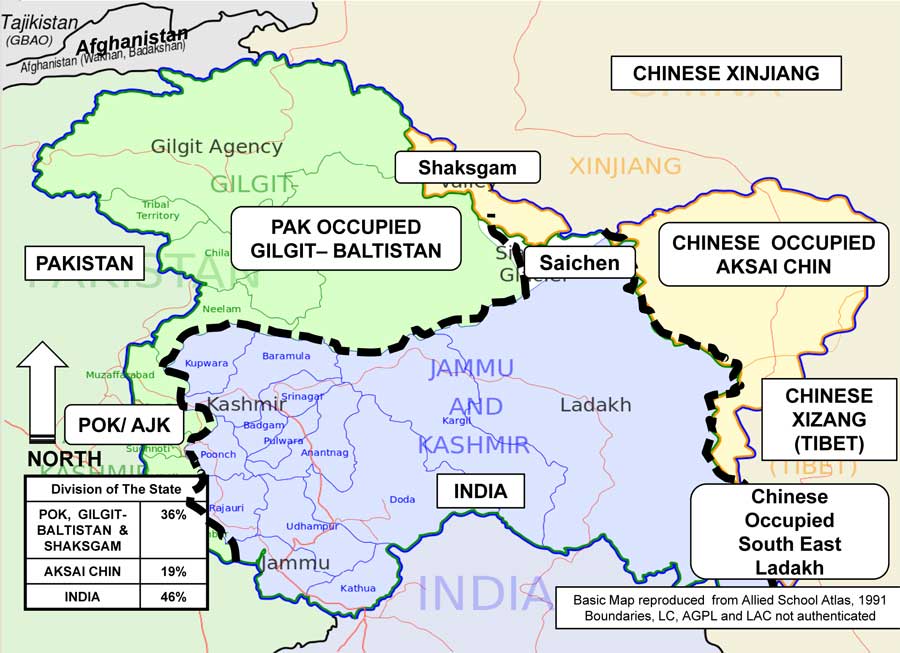 For the last 1,200 years, Bharat has been regularly invaded by Islamic countries situated in the north-west.  After the Sikh and British forces collaborated and succeeded in Afghanistan, the British Raj was able to fortify the north-west borders of the country and there weren’t any invasions for almost a century. However, after the formation of Pakistan the local tribals once again resumed their attacks on Bharat.

Pakistan sponsored cross-border terrorism needs to be seen from a new perspective. The creators of Pakistan not only believed in two-nation theory, but also saw the entire world and humanity at large in two divisions as Islamic and Non-Islamic. Due to this, the Islamic world decided to seize Kashmir valley as Bharat is also a secular nation. So Islam’s Salafi-Wahabi sect was propagated in Kashmir, the funds for which were pumped in by Arab countries. However, New Delhi always tried to resolve the Kashmir issue from a political, social and cultural perspective.

Nehru’s article 370 gave a special status to Jammu & Kashmir, through which he wanted to show Pakistan and the entire world that two-nation theory was flawed and how Pakistan and other Muslim majority states could have also enjoyed special status, whilst being a part of Bharat. In this case, Nehru made a Himalayan blunder of overlooking the global jehadi point of view of Pakistan, thereby, repeating the same mistake committed by Congress in the year 1932 by accepting communal award, under which Muslims got a chance to elect their separate representatives, which ultimately led to the partition of the country.

The leaders of Pakistan have always considered themselves to be the descendants of Mohammad Bin Qasim, Mahmoud Ghaznavi and Mughal invaders, and just like them they have always wanted a Muslim empire from Central Asia to Sindhu river, to create a base for re-invading Bharat. There are two reasons for this, first being, the rivers supplying water to Pakistan pass through the state of Jammu & Kashmir, hence Pakistan wants its supremacy on the state. Second reason being, although we keep ranting about Kashmiriyat, however, the state has always been a centre of communal elements for the past many centuries.

On the unfortunate day of 19 January 1990, it wasn’t the first time when Kashmiri Pandits were forced to vacate their own land; in the last 700 years of Kashmiri history, this was the seventh time that Hindu minorities were forcibly made to leave. We have never even discussed this in our history lessons, but Pakistan grabbed this opportunity to upsurge Islamic fanaticism. For this purpose, an entire network of Wahabi-Salafi mosques and madarsas was created.

Article 370 ensured that Kashmir would always remain a Muslim majority state. Instead of Jinnah’s two-nation theory, Nehru Govt. made a colossal mistake of creating a Muslim sub-nation in Kashmir. While the final nail in the coffin was when the Sheikh Abdullah Govt. unilaterally divided the Vidhan Sabha seats of Jammu, Kashmir valley and the Ladakh region in such a systematic manner that Kashmiri Muslim politicians would ruled the political scenario in the state for ever.

When Pakistan started favouring separatism, Muslim leaders of Kashmir valley took aid behind the scenes from the separatists during elections. We shouldn’t be shocked when school kids start pelting stones in support of a Burhan Wani who like ISIS leader Baghdadi had dreams of creating a medieval Islamic state in Kashmir, since they have been distanced from Bharat’s parliamentary laws, totally cut-off from Bharat’s non-Muslim majority and raised on a diet of hatred borne out of Islamic fundamentalist preaching. This was bound to happen.

We should have taught our Kashmiri kids about Pakistan’s barbaric treatment of its own people, exemplified by the mass genocide of 25 lakh Bengalis in then East Pakistan (today’s Bangladesh) during the 1971 war by the Pakistan Army. We can highlight the atrocities committed by Pakistan army in Pak-occupied Kashmir and Gilgit-Baltistan. Also, if we can fill up the vacant Vidhan Sabha seats of these areas with some human-rights activists, then they could give details of the harrowing incidents taking place there and discuss the same in the Assembly.

Why don’t we clearly tell Kashmiris that Pakistan is only interested in the rivers of their state, and to deviate their attention from this issue they are spreading Wahabi Islam in the state. Bharat is strengthening its borders to stop infiltration of terrorists from Pakistan, but we aren’t doing much to stop the flow of funds from Pakistan and other Gulf countries who are spreading Islamic fanaticism in the state. Pakistan does not have the required military strength to defeat us in a war, however it has been able to spread Salafi-Islam deep in the state.

This menace cannot be solved till the time the population imbalance in the state of Jammu & Kashmir is not addressed. Not only Jammu and the Ladakh regions need to be politically & economically strengthened, but also the influence of Kashmiri politicians and separatists must be reduced. There should be a re-allocation of Vidhan sabha seats – this delimitation exercise should consider population, average no. of voters per seat, and area to increase the Vidhan Sabha seats from Jammu.

In fact, Jammu should be transformed into an industrial zone on the likes of Bengaluru and Hyderabad, whereby skilled workers from across the country are attracted. And this could be connected through a financial corridor to the neighbouring states of Punjab, Haryana, Rajasthan, Delhi and Uttar Pradesh. Worldwide Jewish merchants helped re-establish Israel in the midst of Arab countries after 2000 years. Similarly, Bharatiya corporates and businesspersons could help in resolving the Kashmir dispute.

(This is an English translation by BM of an op-ed which appeared in the Hindi daily Jagran.com – http://www.jagran.com/editorial/apnibaat-kashmir-in-jiff-of-pakistani-conspiracy-16184755.html)