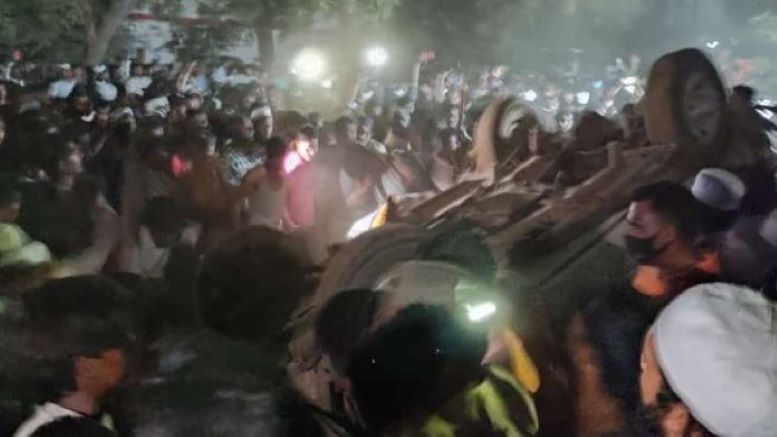 Complaint against the construction of an illegal mosque in Andhra Pradesh’s (AP) Kurnool district led to the Islamist mob violence on Saturday. As per reports, BJP workers including District President Budda Srikanth Reddy and General Secretary (GS) as well as the police came under attack as the mob went on a rampage pelting stones and burning police workers.

BJP leader Sunil Deodhar shared a video of the incident showing the destruction in which several BJP leaders also sustained injuries. According to BJP’s National Secretary Y Satya Kumar, protest against the raising of a mosque that is illegal led to Islamist violence. In addition to Kumar, BJP’s AP GS Vishnuvardhan Reddy also issued a statement regarding the incident.

“The BJP leaders including Srikanth Reddy and others questioned the government over illegal constructions at Bandi Atmakur town. When they were questioning it, some people attacked the BJP leaders and damaged their vehicles in front of the police. It is shameful and unfortunate. The BJP is condemning it and demanding a stern action on it” states Reddy’s press release while adding that it was a murderous attempt on Srikanth and others that called for a thorough probe.

The Saturday violence in Kurnool district’s Bandi Atmakur was triggered by a conflict that had arisen between Hindus and Muslims over the building of a mosque behind the Padmavati school. “Some people were trying to instigate clashes in Kurnool district. Police will take stringed action on those who tried to provoke people in the name of religion”, said AP DGP DG Sawang.

Islamists reportedly gheraoed the police station and attacked BJP workers. The police then resorted to firing in the air to bring the situation under control in addition to deploying a heavy force in the area. “Srikanth Reddy’s car got damaged in this violence. Muslim mob also pelted stones at BJP workers and police. The BJP has demanded that a case of an attempt to murder should be registered against the people involved in the incident. There is also talk of the death of a young man, but it has not been confirmed”, said a report by OpIndia.

The construction of illegal mosques as part of ‘land jihad‘ is being increasingly reported from various parts of the country. It recently came to light that a mosque had been constructed illegally within the iconic Raigad Fort premises.