In an unprecedented crackdown against dissenting citizens, the Communist Government in Kerala has arrested a staggering 1400 Hindus, including women, as parts of raids conducted since Wednesday against Ayyappa devotees protesting the forced disruption of the timeless tradition at Sabarimala temple. Police have filed 440 cases and issued lookout circular for 210 persons allegedly involved in the protests at Nilackal, Pampa and Sabarimala, reports The Hindu. And the count of arrested people is going up by the hour, with arrests at wee hours being done especially to instil terror, as per sources.

Over the last few weeks, lakhs of Ayyappa devotees have poured into Kerala’s streets and in other parts of Bharat and overseas as well, to plead for a review of the SC verdict passed on 28 September which ended the ancient tradition of menstruating age women not undertaking the pilgrimage to Sabarimala.

Several Hindu organizations pleaded with the CPM-led Kerala Government to not rush to implement the SC order, as review petitions are being filed in Supreme Court to reconsider the earlier order. SC has now notified these 19 petitions for hearing on 13 November.

But the Kerala government remained adamant and even provided massive police cover to dubious activists like Rehana Fathima, Liby CS etc to assist them in their objective of violating the sacred tradition which is important to millions of practising Hindus.

And now, ordinary Hindu devotees of Sri Ayyappa are being arrested like common criminals in a state where political killer gangs operate with impunity.

What is striking is that the national media, self-appointed human rights champions and Lutyens’ intelligentsia which had gone ballistic and cried ‘democracy in danger’ when 5 activists were arrested by Pune police for alleged Maoist terrorist links and for staging the violent BhimaKoregaon agitiation, have either chosen to remain silent over the chilling crackdown in Kerala, or are openly lauding the totalitarian stance of CM Pinarayi Vijayan. 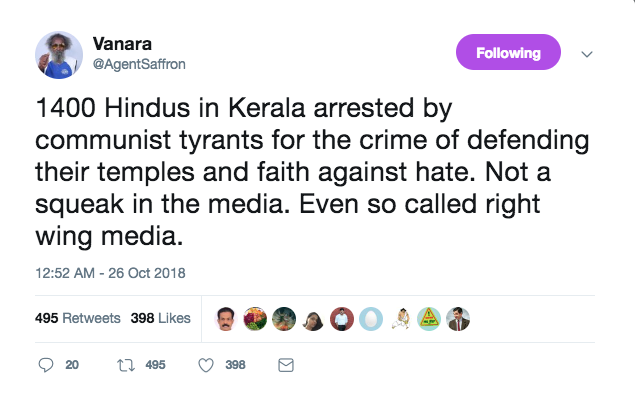 The Sabarimala temple will reopen for one day on November 5 for the celebration of Chithira Attathirunal, the birth anniversary of Sri Chithira Thirunal Balarama Varma, the erstwhile king of Travancore royal family, and after that will reopen for devotees on 17 November for 2 months.

It appears that through this sweeping police crackdown, the CPM Government wants to ensure that the temple tradition is broken at the earliest possible opportunity, possibly even before the SC hearing of the review petitions which is slated for 13 Nov. On 22 October, Chief Justice of India Ranjan Gogoi had fixed the date for hearing as 13 Nov, while refusing to hear the petitions filed by National Ayyappa Devotees Association and others before it closed for Diwali holidays from 5 – 10 Nov.

Many are calling for an urgent SC hearing on this matter and an order directing Kerala Government to maintain status quo until then, comparing it with other matters where Supreme Court held emergency midnight hearing such as Congress-initiated petition over Karnataka Government formation, or the the mercy petition hearing for convicted terrorist Yakub Memon.

High-profile flag-bearers of our Constitutional morality, who were labelling arrest of suspected urban naxals as “an attack on freedom of speech… an act to undermine the fundamentals of Constitutional democracy”, are not only silent about the police repression unleashed by the Communist government of Kerala, but are actually distorting the Sabarimala issue by falsely equating it historical movements for Scheduled Caste entry into temples –

So brazen is this distortion, that it forced another liberal, ex-Foreign Secretary Nirupama Menon Rao, to come out and set the record straight. 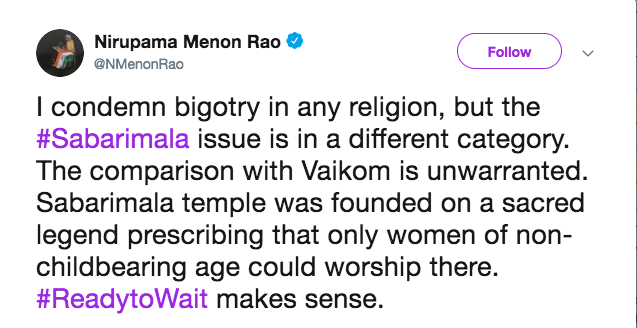 Given the recent history of bloodshed in Kerala (dismissed as ‘political squabbling’ by liberal establishment) and the reticence of RSS/BJP to loudly support their workers and volunteers who are facing the brunt of the state-sponsored brutality in Kerala, it is hard to predict how much worse the situation could get in the state for Ayyappa devotees.

It is hard to forget that Pinarayi Vijayan is a man accused by an ex-CPM leader and present Congress MLA A.P. Abdullakutty, of instructing CPM party workers in 2008 to follow the Bengal communist style of killings opponents – ‘bury their bodies in a deep pit along with a sack of salt. The world never comes to know about the blood, photographs or the news about such killings.’.

One can only hope that urgent action is taken to rein in the CPM Government, before the situation goes fully out of control.