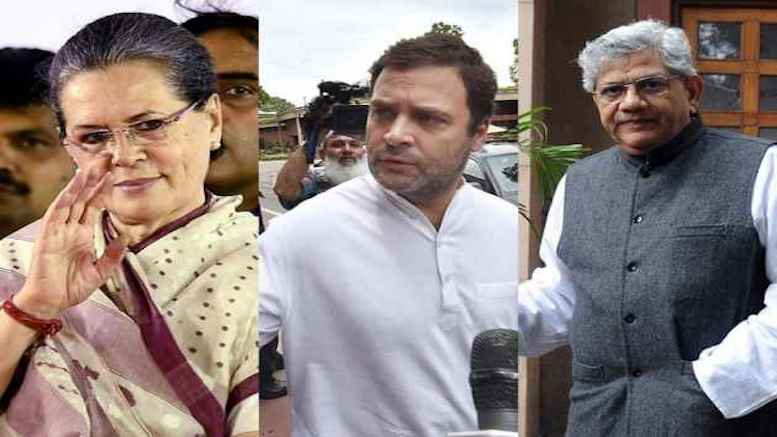 With the clouds of a limited war with China looming over Ladakh, there has never been a better time to lob a question plaguing conservative minds for long but considered impolitic to ask: How firmly should the nation’s internal enemies be dealt with? More importantly, has the stage come for the Congress to be formally conjoined with the original mob of anti-nationals comprising communists, urban naxals, jihadis, left-leaning NGOs among others? Sponsoring disaffection, running relentless campaigns to weaken the body politic has been their source of survival for much too long.

The recent utterances of the Congress leadership over the China imbroglio begs the question: What is the level of the party’s commitment to the national interest, especially since Antonia Maino took over the party’s reins in the 1990s? Lest there be any confusion on what constitutes the national interest, be it known without the slightest compunction that it runs parallel to the Hindu interest. And the Hindu interest cannot be seen from a narrow communal prism. It is a civilizational concept whose contours extend beyond religious confines. Relentless efforts to supplant our ancient dharmic values with alien ideologies and thought processes have brought matters to a head. Marxism, secularism, pan Islamism violate the spirit of Bharat. Has anyone heard of shouting hordes in Germany, France, Spain, or Italy make a determined bid to displace the primary ethos of these countries?

Which is why those disavowing the country’s Hindu roots and identity need to be reminded from time to time that religion was the sole raison d’etre behind the Partition. The adoption of a secular Constitution was a colonial imposition to which both Mohandas Gandhi and J Nehru readily agreed given their implicit faith in British institutions. It was a fraud foisted on the nation for which we continue to pay a heavy price. Bharat is still known to the world by its British cognomen “India”, the Gregorian calendar we follow is of Christian vintage, our attire is largely English, and the most admired language, both spoken and written, is the language of John Bull and Uncle Sam, not Sanskrit, Hindi, Bengali, Tamil, Kannada, or Marathi. Anything desi is seen as down-market.

Nothing has radically changed in seven decades. Why? Because the political party which prides itself as the harbinger of our Freedom was also a creation of the British, and its first president a white. Topping it all was the appointment of a brown sahib wedded to the ideals of Fabian socialism as our first prime minister. This, despite open preference within party fora for Sardar Patel. In fact, one of the reasons why Mohandas vetoed Patel’s candidature was because he did not speak English with a clipped British accent like J. Nehru. The Sardar’s desi image was perceived a disadvantage during confabulations with world leaders. This was the second time Mohandas threw inner party democracy to the winds after the great sulk which compelled Subhas Chandra Bose to step down as Congress chief in 1939. Mohandas was taken aback when his nominee, Pattabhi Sitaramayya, was pipped by Bose during the election of the party president at the Tripuri session. Both J. Nehru and Maulana Azad had chickened out of the contest for fear of losing. Mohandas, however, always had his way. And this is the man we still address by the honorific, mahatma.

The stance of the communists and their Leftist allies has never been a secret. “China’s chairman is our chairman” was the slogan of the radical wing of the Communist Party of India (CPI) in 1962. The split over open support for China led to the formation of the CPM and the gradual marginalization of the CPI over the years. A party swearing allegiance to an enemy country would probably have been banned elsewhere. It was instead allowed to thrive in three states for several decades. It is no coincidence that jihadi activity has peaked in Kerala, the only state where the CPM’s political base is still intact. Not because the Marxists wish to nurture jihad, but because any activity which adds to the troubles of a Hindu centric national government fulfils their electoral interest.

Is the Congress any different despite lip service to the nationalist cause? Quite apart from the Dynasty most of its frontline leaders speak with forked tongues on matters impinging on the country’s security. Insulting the armed forces is second nature to them. A party MP once called the army chief sadak ka gunda (roadside rowdy). Oddballs daring to shoot from the hip are immediately cut to size. The erratic mouthed Opposition leader in the Lok Sabha, Adhir Ranjan Chowdhury, though no copybook patriot, was compelled to delete his tweet on the capability of the Bhartiya army to defang the “venomous” Chinese “snakes” at the border and check “yellow” expansionism. Earlier his party was compelled to distance itself from his demand that Taiwan be granted diplomatic recognition for supplying over a million facemasks to fight the Chinese coronavirus.

Faking is the name of the game which the Congress has played for decades after the demise of Indira Gandhi. Rahul Gandhi referred to the prime minister as “Surender Modi” after a Japanese newspaper observed that Bharat’s policy of appeasing China had failed to have the desired result. The wordplay on the PM’s first name was at best a poor joke (PJ) which betrayed the intellectual superficiality of a 50-year-old. He forgot his father’s pacifist overtures. To cite a tweet from the defense analyst Brahma Chellaney addressed to RaGa, “Every PM after Indira Gandhi has kowtowed to China. The appeasement began with Rajiv Gandhi’s 1988 China visit and deepened since the 2003 Tibet cave-in.”

Each participant at the All-Party meet on June 19, including political sharks like Sharad Pawar and Mamata Banerjee came out in unconditional support of the government on the Chinese incursion. All except Antonia who claimed “we are still in the dark” on the confrontation at Galwan. Sought was a clarification on whether Intelligence failure may have been a factor. Not a word escaped her lips on China’s malfeasance.

The faux concern from the leader of a party solely responsible for ignoring our defense needs for decades elicited derision. Especially after details of an MoU the mother-son duo had signed with the CCP in 2008 during a private visit emerged in the public domain. The MoU undertook to exchange mutually useful information to buttress “close linkages” at the party level. Xi Jinping, then vice-president, was present on the occasion. Confirming the Dynasty’s cushy personal equations with the Dragon was Rahul Gandhi’s private meeting with the Chinese ambassador in the thick of the Doklam crisis. Such liberties can only be taken when a country’s core values have been compromised across several generations. None, not even the BJP, had the gumption to ask why should the dynastic leaders of a party who never held Constitutional office have felt the need for a private understanding with the party in power of an enemy country sidestepping the ministry charged with supervising its foreign affairs.

Not for nothing do Pakistan and China wilfully exploit the fault lines in our system through their agents in the media and the bureaucracy. Which explains their open preference for a Congress run Bharat. Dealing with a bunch of deal makers is easier given their proclivity to cave in during negotiations. The shame at Sharm El-Sheik in 2009 still nettles. The charming ease with which Pakistan managed to insert a clause in the joint statement which tangentially referred to Bharat’s efforts at fomenting trouble in Baluchistan showed Man Mohan Singh, then prime minister, in poor light. Left to himself he would also have given up on the occupation of Siachen in the name of demilitarizing the glacier despite its strategic importance.

Slack Intelligence has helped internal enemies to thrive. Not even 26/11 taught us the right lessons. Truth to tell Bharat has never had an Intelligence system worth its name. A 2012 report published by the Institute for Defense Studies and Analysis (IDSA) admitted that the Indian intelligence did not evolve out of any detailed and well thought out administrative policy. It was an extension of the colonial police system aimed at maintaining law and order. Its primary duty was to check the growth of Hindu nationalism with adequate policing methods.

The absence of an agency with the formidable powers of the Federal Bureau of Investigation (FBI), the Israeli Shin Bet (Shabak) or the much reviled and ubiquitous Pakistan Inter-Services Intelligence (ISI) is the main reason why the Chinese have become such an insurmountable threat.

FBI boss J Edgar Hoover ran the agency for 48 years till his death in 1972. He was feared by every President from Calvin Coolidge to Richard Nixon. Harry Truman castigated Hoover for transforming the FBI into a virtual Gestapo but knew that the US needed a man like him to keep internal enemies at bay. Hoover had a dossier on everyone in the corridors of power, be they Congressmen, Senators, or corporate honchos. Nixon hated him but was compelled to eulogize him as, “One of the giants… a national symbol of courage, patriotism and granite-like honesty and integrity.” Flags were flown at half-mast as Hoover’s body lay in state in the Capitol.

America’s slow descent into chaos as seen in the aftermath of the “Black Lives Matter” protests is largely due to the downscaling of the FBI’s powers by successive Presidents. Bharat will need to develop its home grown Hoovers to weed out its internal enemies before it can even hope to take on the Dragon, both economically and militarily.