‘Any Indologist/Historian Suspected Of Pro-Hindu Opinion Has No Chance Of Making A Career’ – Prof. Koenraad Elst, His Interview – 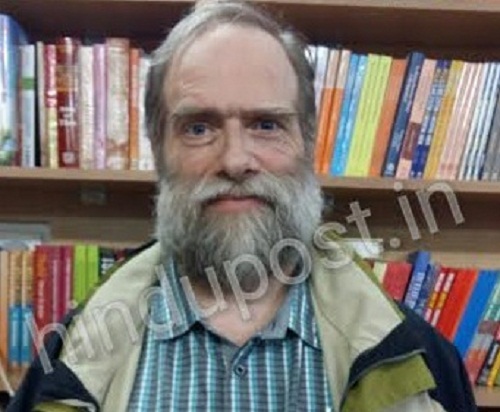 Sh. Koenraad Elst  (°Leuven 1959) distinguished himself early on as eager to learn and to dissent. After a few hippie years, he studied at the KU Leuven, obtaining MA degrees in Sinology, Indology and Philosophy. After a research stay at Benares Hindu University, he did original fieldwork for a doctorate on Hindu nationalism, which he obtained magna cum laude in 1998. As an independent researcher, he earned laurels and ostracism with his findings on hot items like Islam, multiculturalism and the secular state, the roots of Indo-European, the Ayodhya temple/mosque dispute and Mahatma Gandhi’s legacy. Elst, known for his support for the ‘Out of India’ theory related to Indo-Aryan migration, became identified with Hindutva politics during the 1990s, following his support for the Bharatiya Janata Party’s position on the Ram Janmabhoomi temple in Ayodhya. We speak to him on various issues, here is the audio interview :

Below is the summarized English transcript of the interview, his key points are mentioned in bullets :

–Namaskar sir, we welcome you to Bharat. Thank you for speaking to Hindupost. You are visiting us after demonetization has happened here. There’s a lot of news in the media, how do you perceive this move by the government?

–Sir, on your blog, one of the latest articles is ‘ Modi Government as an exponent of BJP secularism‘. In that, you have mentioned that ‘ the so called Hindu extremist party ( as labelled by media) has no Hindu agenda ‘. So, how do you think that the BJP today has moved on from Jan Sangh, how is it different from Jan Sangh?

– Sir, do you think there is no real Hindu voice in the political spectrum today?

– Sir, don’t you think the entire narrative of any issue to begin with, what we used to call the center has shifted to the left? Like, earlier the mainstream media used to call the cow protecting Hindus as extortionists etc, today, the narrative has moved from there to ‘What is wrong in eating beef’. So, don’t you think that every issue related to Hindu ethos, the narrative that used to begin from the center, now begins from left itself?..

–Sir, coming back to the government, what are the three things that you think Modi government should do to bring parity, specially in policy, to Hindus?

–Sir, the pillars of democracy, judiciary, media, bureaucracy etc are not aligned to the thought of parity to Hindus. Like last few judgments by the Supreme Court on Hindu festivals like Dahi Handi (you have a similar festival in Spain of forming human pyramids which even UNESCO has appreciated!), Jallikattu etc show that the pillars of democracy are not aligned to this thought of parity. So may be that’s why Modi government is not able to do it, because may be they think that once it goes to judiciary, it might be hammered back… What do you think about this?

–Sir, What are the other two things government should do?

– Thank you Sir, you have researched a lot on Ayodhya Ram Temple issue and you have been strongly associated with this movement. What do you think is the ideal way forward?

–Sir, this concept of Akhand Bharat, do you think the Modi government somewhere, via the issue of Balochistan, has brought up the possibility of bringing this narrative again, or do you see this just as crack down on terrorism?

–Sir, you have also written that the only Hindutva thing that AB Vajpayee government had done was, Murali Manohar Joshi’s initiative of change in the text books, but you have called it clumsy…

–Sir, there is this rise of rightist politics in Europe again, may be because of influx of so many Muslim refugees there. Do you see a global trend of challenging the communist narrative and do Hindus have a learning in it?

– Sir, you have been very vocally critical of Islam. We remember the India Ideas Conclave incident of 2014. Do you think that there still is no real freedom of speech and growth, when it comes to logical criticism of religion?

–Sir, asking you a personal question. You write so much on Hindutva, you never thought of coming into the Hindu fold personally?

(For full detailed interview, please listen to the audio link above, we thank Sh. Koenraad Elst for speaking to us).

BJP faces a new challenger from within: The uncompromising Hindutvawadis