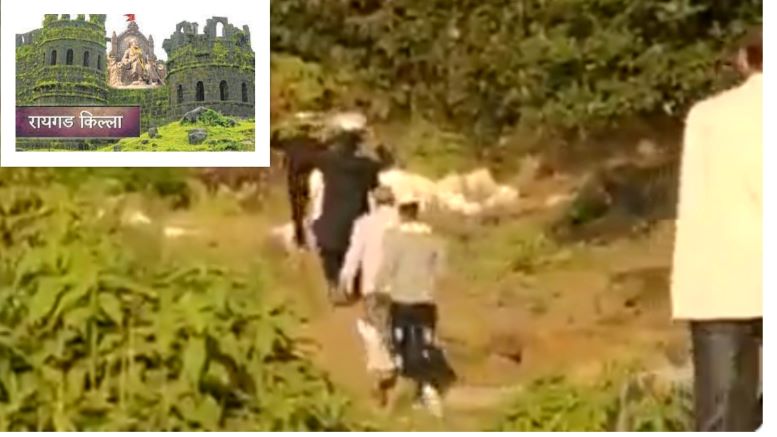 Forts in Maharashtra are increasingly coming under the grip of Islamists who are raising illegal constructions within the premises of iconic forts in addition to falsifying history by inventing fictional characters. Earlier this month, it had come to light that a mosque was being illegally constructed within the Raigad fort with impunity throwing rules to the wind causing extreme distress to followers of Chhatrapati Shivaji Maharaj.

While Yuvraj Sambhaji had stepped in and raised the issue of the structure within the Raigad fort with the archaeological department, a delegation of BJP leaders has now petitioned the center to take cognizance of unauthorized constructions at Maharashtra forts.

A report by The Print notes:

A delegation led by BJP leaders Vinay Sahasrabuddhe and Sunil Deodhar on Tuesday petitioned the Centre on the issue of unauthorised constructions with the “intention of revival of religious structures” at several forts, including Raigad and Kulaba, in Maharashtra.

Sahasrabuddhe said similar illegal constructions have been reported from Fort Vishalgad in Kolhapur in Maharashtra, and urged Meghwal to set up a high-level committee of elected representatives and government officials for an on-the-spot assessment of the “grave situation”.

“Recently, incidence of fresh illegal constructions and renovations of structures claimed as associated with religious worship in the past were brought to our notice…. It was evident that attempt was made by few miscreants to reconstruct old structures with application of white paint in order to revive religious practice,” the delegation said in a memorandum to Meghwal…

…They asked Meghwal to direct the ASI to ensure that no construction or renovation takes places inside any of the protected monuments with the intention of revival of religious practices.

…The delegation also asked Meghwal to warn the local administration against “protecting such miscreants” and alert the ASI to prevent such “aggressions”.

The delegation also highlighted that a part of Chandangad Fort located in Satara District has been renamed as ‘Dargah Chandan’ and plans were afoot to construct a place of worship (read mosque). Another important point to note is the celebration of Urs on a large scale like the one at Lohagad Fort that too at the site of Bhairoba temple.

In this regard, author Aneesh Gokhale says, “On Lohagad, it was a shrine to Bahiroba converted into a tomb for Shaikh Umar. Just like the Narayaneshwar temple and Punyeshwar temples were converted to the Dhakta Shaikh Salla and Thorla Shaikh Salla dargahs in Pune“.

The active connivance of the present MVA (Maha Vikas Aghadi) government in the name of secularism has also come to the fore. Muslims who have encroached on many forts before have been aided by ‘secular’ politicians. NCP MLA Sunil Shelke has given his support to the above-mentioned Urs event as is evident from the pamphlet.

Politicians cannot be allowed to subvert history using secularism as a convenient excuse. It is high time we Hindus unite to stop these wrongdoings under the name of secularism else we might end up losing our forts that stand as testimony of our glorious history.