Did you know about the 1.5 lakh Punjabi Hindu refugees who fled to Delhi’s Piragarhi camp due to Khalistani terror? 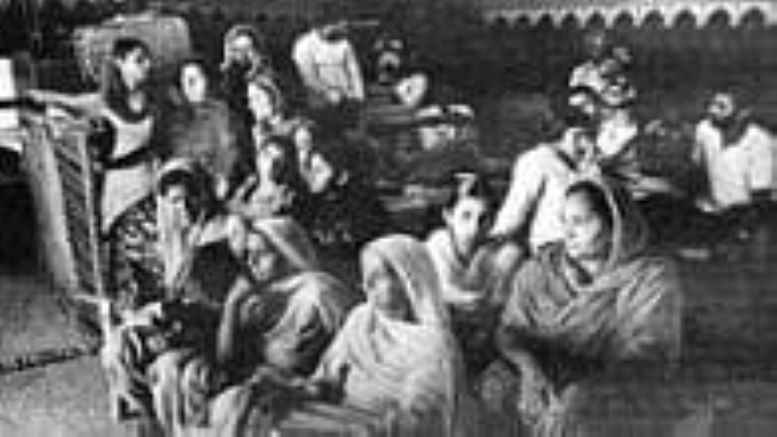 The one exodus that doesn’t get much attention is that of Hindus from Punjab who left their homes and properties behind to find safety in Delhi. This exodus was not by choice but forced upon hapless Hindus by Sikh radical Khalistani terrorists led by Bhindranwale. Story of those Hindus who were made refugees in their own country by their own people (or so they thought) remains untold.

Hindu persecution at the hands of Bhindranwale and his followers started in 1980 claiming its first victim Lala Jagat Narain who was the publisher of the vernacular newspaper Punjab Kesari and openly critiqued the Khalistanis. This was only the beginning of what was to be a violent campaign that was to rage during the 1980s & 90s claiming several innocent lives and forcing people to seek safety and shelter elsewhere.

Human Rights Watch report pointed out how militants besides resorting to indiscriminate killings of civilians also started to coerce businessmen and landowners by demanding protection money. Much like how Kashmiri Hindus were asked to convert or leave, posters were put up in villages threatening Hindus to leave or face the consequences.

Needless to say that the Sikh radicals employed every form of coercion including robbery, extortion, rape, indiscriminate killings and ever-escalating terrorist attacks on innocent civilians. It was quite common to hear/read reports of grenades and bombs being thrown during Hindu religious festival celebrations and at movie theaters, militants firing indiscriminately into crowded markets, Hindus being pulled off busses and trains and massacred.

Every form of atrocity that would induce fear and make the people leave was used by those who believed in the idea of Khalistan – land of the pure. Sounds like Dar-ul-Islam, doesn’t it? No wonder Khalistani terrorists co-opt with Islamic radicals.

In 1986, two incidents four months apart saw the slaughter of Hindus who were ordered off the bus by militants. In the first incident, Sikh passengers were asked to leave and 15 Hindus were slayed in cold-blood on a bus in Muktsar. In December 24 Hindu passengers were slayed while 7 were wounded after they were ordered to get off the bus and militants opened fire on descending passengers in Hoshiarpur district’s Khuda.

Similarly, militants opened fire on Hindus celebrating Holi in March 1988 killing 32 Hindus and injuring 25 in Hoshiarpur district. In June 1991, having already killed a group of people about half hour back on the same train route near the city of Baddowal, Sikh extremists segregated Sikh and Hindu passengers on a train and ordered the Hindus out before slaying them execution-style just as radical Islamic outfits have been and continue to do today.

This violence was accompanied by copious amounts of Hindudveshi propaganda aimed at intimidating the minority Hindus. The Sikh militants also desecrated Hindu temples by keeping severed heads of cows at temples in yet another attempt to attack Hindus and their faith. The orders to kill Hindus came directly from top Khalistani leaders including Bhindranwale who asked every Sikh to kill 32 Hindus to solve the Hindu-Sikh problem!

Then there were Khalistani leaders like Ajaib Singh Bagri of the Babbar Khalsa International who publically called for the massacre of Hindus at a rally in Canada in July 1984 where he said:

“They say that Hindus are our brothers! But I give you my most solemn assurance that, until we kill 50,000 Hindus, we will not rest!”

The pro-Khalistani crowd replied with “Hindu dogs! Death to them!” indicating the kind of hatred that was being nurtured. The Khalistani movement took advantage of the seeds of Hindu-Sikh discord that were sown by the British and the feeling of resentment among Sikhs brought about first by the partition in 1947 and subsequently by the trifurcation of Punjab on linguistic basis in 1966.

Khalistani leaders not only used the underlying resentment to recruit people but also projected it as injustice against Sikhs to push for the narrative that only a separate Sikh country could safeguard Sikh interests. The brunt of all this hatred was borne by innocent Hindus who were forced out of their homes and take shelter at northwest Delhi’s Peeragarhi Relief Camp setup for Hindu refugees from Punjab in 1984.

These Hindu families fled Punjab abandoning their homes and properties out of fear of certain death at the hands of the Sikh militants. The extent of fear is clear from what a 75-year-old Tirath Ram, resident of Fatehabad village in Amritsar district’s Tarn Taran said: “it is worse than 1947 when hundreds of Hindus, Sikhs, and Muslims died. That happened only once, but today killing is a daily business”.

And the fear was not unfounded as one Fatehabad resident put it: “We were all so scared there that whenever extremists killed one of us nobody would even come forward to lift the body for cremation for fear that, the extremists would get them too”.

That this exodus was imposed on the people by Khalistani extremists is clear from this India Today report which says:

There is no doubt that Hindu families are being terrorized and forced to leave Punjab as part of a deliberate and sinister strategy. Initially, posters and graffiti appeared on walls in Tarn Taran, Ajnala and Patti, signed by the “21st and 22nd battalions of the Khalistan Commando Force”, which warned: “Within one month all Hindus should vacate Punjab and those who support them should also go. If they do not do this they shall be killed and their houses burnt. Nobody should buy their land or property.

They did not stop at posters alone and issued threats over telephones and using handbills which said that Hindu women would be molested and children massacred if Hindus failed to heed the warning and leave. As the India Today report rightly put it For a community that had lived through the aftermath of Operation Bluestar, that had great hopes from the Akali Government and braved the increasingly selective killings in the last few months, this threat proved to be the last straw and what began as a trickle turned into an exodus as feared even though it was a slow and steady one.

The forced exodus of Hindus from Punjab as also their mass massacre remains unspoken and untold. The story of a people that were persecuted for merely being Hindus because the Sikh militants believed they needed to cleanse their pure land is not even a footnote, leave alone a chapter, in popular discourse. As is the wont with Hindus they continue to sweep the pain under the carpet, pick up the pieces, and put together their lives again while the scars remain.