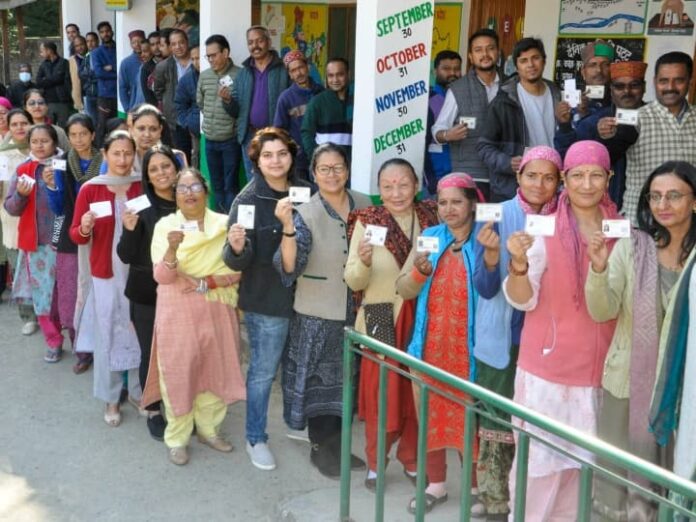 The general belief is that people come out to vote in large numbers to show their  resentment for an incumbent government or their readiness to install a new government.

Himachal, which went  to the polls on November 12, has a 37 year old record of voting incumbent governments out.

Himachal  has been voting out governments every 5 years since 1985 but a look at the voting percentage since 2007 reveals that the himachal electorate has voted higher than the previous elections to vote a government out.

In the just concluded assembly elections on 12th November the state recorded a record 75.6% turnout including 1% postal ballots and with 2% ballots still to received the turnout  is set to cross 77%.

This is the highest voting turnout  in the past 6 elections according to Moneesh Garg the Chief Election officer and going by the past trends it could lead to a change of government in the state as has been happening  in the past though the ruling party would like to believe that the  increased voting turnout will favour it.

Thus the Congress managed to retain its vote share slipping by just 1% even though its seats tally came down to 21. In this election if the Congress surpasses its 2012 vote share of 42.81% then its tally of seats could safely cross the 34 seats required for a simple majority.

The rebels are likely to make a dent in the BJP’s vote percentage which will hurt its chances more of retaining power in the State. On the other hand if the Congress  is able to increase its vote share by even 1% or more as compared  to the last election (41.7%) it stands a very good chance of forming the government.

Another factor is the women voter which unnumbered men by almost 4.5% in voting and their franchise will have a decisive impact on the election results. Both the parties have gone all out to woe the women voter with the Congress promising 1500 rupees in every woman’s account and the BJP promising 33% reservations for women in government jobs and 3 free LPG cylinders to poor women in one year. Nari Shakti could well decide the fate of this election and the parties.