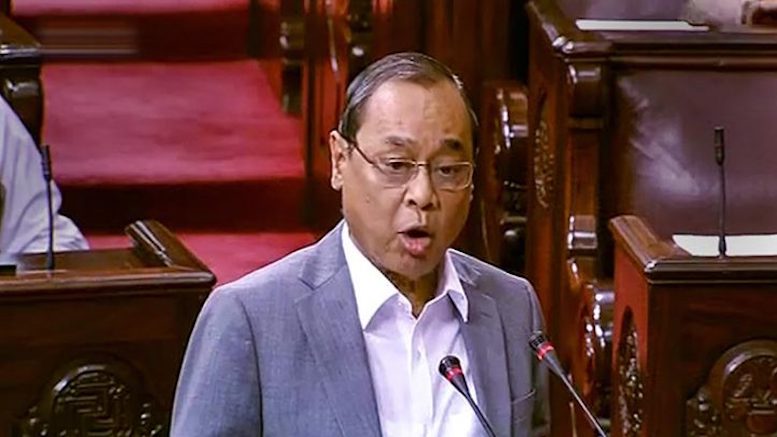 The flood of protestations and expostulations from the Left-liberal brigade and their barking allies over the President’s decision to nominate the former Chief Justice of Bharat, Ranjan Gogoi, to the Rajya Sabha has, predictably enough, set the cat among the pigeons.  Only an innocent would claim that that the government was unaware of the chain of carping and caviling it would set off in the media. Truth to tell, this was one provocation waiting to be lobbed at the Lutyens and Khan Market crowd. Why? Because of the utter hypocrisy of the hyperventilators.

History will remember Ranjan Gogoi as the man who was instrumental in giving the Ram Mandir back to the Hindus in place of a mosque which stood there for nearly 500 years. No other CJI had the character or courage of his convictions to rise above his minority appeasing instincts bred by seven decades of crass Congress rule. BJP rule at the Centre may have paved the way for the more palatable political environment, but every effort was made to sabotage or delay the verdict.

Seen in retrospect, the Ayodhya judgement could not have been delivered without his dogged efforts. For this alone he deserves every single award of any significance, and above all the affection of every true Bhartiya. This includes Muslims like Arif Mohd. Khan, currently Kerala governor, whose patriotism would put several generations of self-loathing Hindus to shame.

Given the domination of Left-Liberals in public discourse, the aspersions cast on Gogoi would have been considerably less acerbic had a judge sporting his secular credentials on his sleeve been the recipient of a similar honor. All the more had he been Muslim or Christian. Charges that the lure of post-retirement benefits influenced this or that judge may at best have been spoken of in hushed tones.

Why? Because the larger eco-system had to be kept intact. Noise making which disturbed the overall equilibrium would have been fobbed off. The Congress’ pet lawyers Kapil Sibal, Indira Jai Singh, Dushyant Dave, and Sanjay Hegde, and the hot favorite of NGOs, Prashant Bhushan, would have restrained themselves from shooting off their mouths. These are the gadflies who were tittering in their sleeves at the government’s discomfiture on 12 January 2018 when Justices Gogoi, Madan Lokur, Kurien Joseph, and J Chelameshwar had called a presser to take up cudgels against the former CJI Dipak Misra at the raw deal they were getting in the distribution of cases in the roster. The outrageous move did not violate anyone’s sense of propriety.

Gogoi’s acceptance of an RS berth has clearly incensed the lobby of self-serving lawyers working in tandem with judges with well entrenched positions. Not because it casts a shadow on the independence of the judiciary, but because it threatens to foster a parallel system in which judges with a nationalist mindset will get their chance of ascent from lower courts. Inbuilt is the fear that it may also encourage time servers of the secular cause in the high courts to change course or be sidelined.

This is precisely the message that needed to be rammed through. Not because the government wishes to make the judiciary do its bidding which it will never in the majority of cases. The sound scolding delivered by Justice Arun Mishra to the Department of Telecommunication (DoT) for advocating the cause of telecom companies avoiding to cough out the Adjusted Gross Revenue is the most recent example of the SC’s refusal to be browbeaten.

Gogoi’s nomination, even if seen as reward, should nudge the SC to adopt a different set of criteria while adjudging cases involving national and cultural interests. It is a prompt-note of sorts to the men and women in black gowns that independence of the judiciary, howsoever noble the notion, cannot come at the cost of the country’s self-esteem. The sentiments of the majority community, its original inhabitants, cannot be violated by casting the slur of majoritarianism. Because the interests of the majority matter just as much as those of the minority, if not more.

The former CJI’s own explanation on why he agreed to enter Parliament mirrors the view. He said he had a strong conviction that the legislature and judiciary must at some point of time work together for nation-building. Even the Bar Council of India gave the development a positive spin. Gogoi, it was felt, would be a bridge between the legislature and the judiciary and help disseminate the “first-hand views” of the latter before the law makers and relay back theirs to the court. The SC’s decision on the Constitutional validity on the abolishment of Article 370 and the passage of Citizenship (Amendment) Act will further test the waters on whether it is changing with the times or still waffling.

A judge committed to the national interest is free to reject a sinecure offered by the government should he think it inappropriate. But there is no harm in occasionally handing out offers to the deserving if only to convey  appreciation. Gestures matter. Those furthering Bharat’s ancient values have no reason to feel guilty by accepting a post-retirement job. They cannot be seen in the same light as men like Justice Ranganath Misra, CJI between 1990-91. He went on to head the single member anti-Sikh riots commission which exculpated the Congress Party, and then was nominated by the party to the RS in 1998.

A more abominable example of a politicized judge than Justice Baharul Islam is difficult to find in the annals of our judiciary. His progress as a Congress time server was in reverse order. He was a Rajya Sabha MP between 1962-72, quit Parliament to become CJI of the Guwahati HC. He retired but only to be recalled to the SC bench when Indira Gandhi returned to power in 1980. Having absolved the corrupt Bihar chief minister Jagannath Mishra in the urban cooperative scandal, he reverted to the RS in 1983 till the end of his term in 1989. And he was just 74 when he died in 1993.

Bharat took a detour from the weather-beaten pseudo-secular path of 70 years in 2014. Some course correction has been made. But as the famous World War One song goes: “It’s a long way to Tipperary…” before we bring back, in parlance to begin with, the ancient dharmic values and principles which constitute the core of our nationhood. A choice of sorts was made by the Partition in 1947 but never allowed to bear fruit. The wrong leader was picked to run the country at the behest of one man despite opposition from his own party.

India cannot become Bharat sans a judiciary conscious of its civilizational duty. Much therefore depends on the kind of men and women sent to the Supreme Court. What is certain is that we cannot afford to have judges like DY Chandrachud whose hilarious observation during hearings on the Ram Mandir showcased the shallowness of his wisdom, the vast knowledge of western jurisprudence notwithstanding: “While Islam prohibits worship of anything apart from Allah, Hinduism says whatever you worship ultimately reaches the same one power. Hinduism in that sense is different.”

And then the punch line: “Hindus can [therefore] worship in a place where namaz is offered.” (tweeted by @bar&bench on 29 August 2019).

Nothing more need be said.