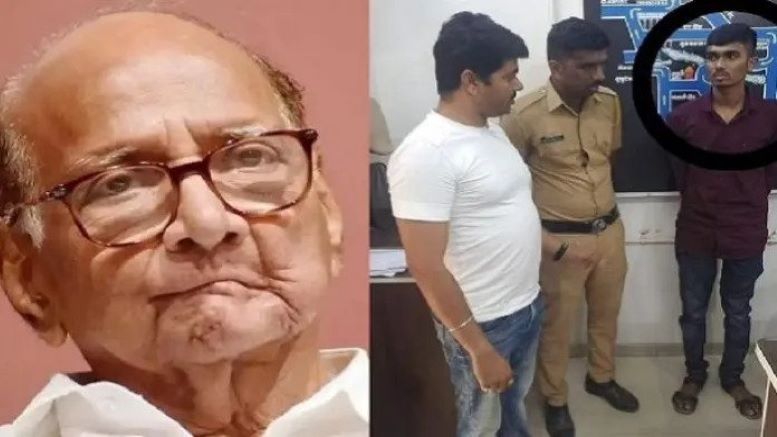 Ever since MVA (Maha Vikas Aghadi) has come to power, Maharashtra has descended into anarchy. Silencing political opponents and even common citizens whose opinions may not be to their liking. The secular cabal that always champions free speech never applies the same rule to itself. The MVA appears to have mastered the art of fascism.

Nashik youth Nikhil Bhamre is the latest victim of the MVA government’s fascism. Last month, NCP leader Jitendra Awhad had Nashik youth Nikhil Bhamre arrested for his social media post. Awhad had demanded action against Nikhil for allegedly criticizing Pawar. “It is time to create a Nathuram Godse of Baramati for a ‘Gandhi’ of Baramati. Uncle, do apologize”, Nikhil had tweeted. Following this, Awhad tagged police officials and demanded strict action against the youth.

Not satisfied having gotten the youngster arrested, the NCP is leaving no stone unturned to keep him behind bars. It has now come to light that NCP members have filed multiple FIRs against the 21-year-old pharmacy student. These cases have been filed in different cities for the same crime in a bid to keep Nikhil engaged in court cases and make him run from one police station to other.

“Multiple FIRs were lodged against him at various places in the state after Jitendra Awhad incited his party workers to do so. The counsels of the youth may urge the court to club all the cases together and direct the police not to register any further cases in the same regard in order to avoid the unnecessary harassment of the youth who has no prior criminal record”, reported OpIndia.

Nikhil comes from a farmer’s family in Dindori and was residing in a rented accommodation in Nashik where he was pursuing his studies. He was targeted by MVA minister Awhad even though he hadn’t named anyone in his tweet.

“Filing multiple FIRs for the same offense is a violation of the Supreme Court order. Troubling someone with a pure political vendetta is simply a violation of human rights”, noted Nikhil’s lawyer Advocate Suresh Kolte. But such violations of human rights have become the norm under the Uddhav Thackeray-led MVA government.

On May 14, NCP hooligans bashed up BJP spokesperson Vinayak Ambekar for allegedly putting up a Facebook post that criticized Pawar. Pawar had made a remark derogating Hindu deities by calling himself ‘father’ of Hindu deities. He conveniently used poetry by Jawahar Rathod to make the comment.

Marathi actress Ketaki Chitale was arrested on May 14 and sent to judicial custody till May 18 on charges of posting ‘derogatory’ remarks against Sharad Pawar. A case was filed against her under sections 500 (defamation), 501 (printing or engraving matter known to be defamatory), 505 (2) (making, publishing, or circulating any statement, rumor, or report promoting enmity, hatred, or ill will between classes), 153 A (spreading disharmony among people), of the Indian Penal Code.

Readers may recall how MVA minister Awhad had Thane resident Anant Karmuse abducted and beaten black and blue in April 2020. Last September, Abhijeet Limaye, the admin of FB (Facebook) page Lakhoba Lokhande, was arrested by the Pune Police Cyber cell on the basis of the complaint by NCP workers for supposedly posting ‘offensive’ comments against MVA leaders. MVA workers blackened his face as Pune police brought him to the court and forced him to issue an apology stating he wouldn’t comment against MVA.

The harassment of social media user Sameet Thakkar is another case in point. In October 2020, a video had surfaced showing Sameet being brought to the court led by men with a rope and his face covered in a black cloth.

“In the video, it can be seen that a man with a black cloth wrapped around his head is being led by a man with a rope. The video has been captured from a distance and there are policemen clearly visible. Sneha Singhvi, the person who shared the video on Twitter, confirmed to us that the man with a black face cover is indeed Sameet Thakkar”, reported OpIndia.

These are merely some instances of MVA fascism. Despite numerous such instances of high-handedness, freedom of speech champions are yet to remove their heads from the sand. Maybe we are expecting too much from the Hindudveshi (Hindumisia) cabal that believes only pseudo-seculars have freedom of speech and expression. The MVA hooliganism keeps plumbing new lows each passing day.