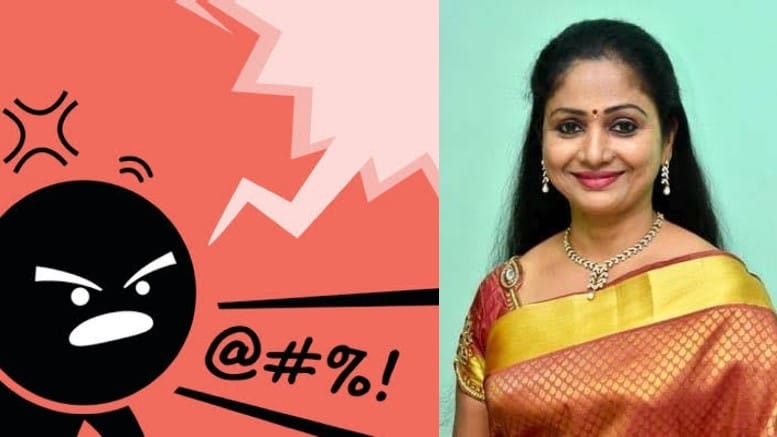 Even as liberals, including Dravidianists, are defending the Manyavar ad, on Tamil language Twitter a female BJP functionary continues to face vile, sexist abuse and sexual harassment from the same self-appointed champions of women rights. Yet, not one journalist or social media influencer often seen showering praises on DMK for advocating “social justice, equality” etc. made a peep about it.

Tamil Nadu BJP functionary Sowdhamini is facing perverse online abuse everyday for merely expressing her views or countering Dravidianist propaganda. For the uninitiated, Tamil social media is not for the faint hearted as it is mainly ruled by Dravidianists. They do not hesitate to throw cuss words at you at the first ever communication attempt itself.

One needs to brave not just cuss words but sexual perversion in the form of verbal abuse as well. If it is a Brahmin at the other end, the abuse becomes multifold. However Dravidianists need not verify or confirm that the person they are abusing is indeed a Brahmin. Tweeting in support of BJP or even anything remotely connected to Hindu beliefs itself makes one a Brahmin and deserving of abuse in their books.

It is not known whether Smt. Sowdhamani is a Brahmin. However she is receiving all the abuse reserved for Brahmin ladies in the most filthy language. For example, a tweeter who is an ardent supporter of DMK and “aggressively tweets in support of Dravidian leaders”, has repeatedly abused the lady in vulgar language.

But this is how such people thrive. By using such bad language that the opponent would think it better to not wrestle with the pig. But expose the puddle the pig lives in, we must, for we have to show the world what Dravidian ideology really stands for.

In one instance, the woman had tweeted about a trend mocking the TN finance minister for missing the GST council meeting for a baby shower function. To that the abuser had replied “Should let a dog lick your c*nt”. To another user who replied to the same tweet, he said “Should make a donkey fu*k your mother’s cu*t”. Another reply, a variant of the same goes, “May a dog lick your mother’s cu*t”.

What’s more, these are likely to be alternative/fake accounts of people who are big social media influencers, functionaries of Dravidian organisations running an alternative handle especially to abuse. Savukku Shankar, a so-called journalist but actually a serial abuser, had revealed on his own that he uses an alternative account in Twitter in some “Iyer” name to ‘snoop on sanghi twitter’.

Translation: “There are two of them..and there is only you..mm mm it would have been very enjoyable..I’ll also join BJP..if not something else I will get “this” in plenty” (this is a reply to the photos of her temple visit)

Translation: “I think you have the habit of kneeling and s*cking Raghava often”

The irony is that DMK leaders, at MLA, MP level, had vowed to make social media safe for women and targeted a few users with alternate ideologies by taking legal action against them.

A fan of actor Joseph Vijay, who had abused journalist Dhanya Rajendran, was made to issue an apology and his video uploaded by the journo herself “as a lesson to faceless trolls who think they can abuse women and get away with it”.

But these same DMK leaders, supporters and ‘neutral’ journalists like Dhanya Rajendran are conspicuously silent about the abuse heaped on BJP women functionaries.

This is the stark reality of Dravidianists and their sympathizers. They claim to be defenders of “social justice, equality and freedom of speech” while addressing the English-speaking middle class and Western audiences, but in Tamil their discourse is full of hate, sexual innuendo and vile abuse directed at their opponents, especially Brahmins and ‘Aryans’.