Communist Party Marxist (CPM) leader MB Rajesh, the two-time former Member of Parliament from Palakkad in Kerala remains mum even as he is embroiled in a fresh controversy. His wife R. Ninitha, a government school teacher, has recently been appointed as an assistant professor in the Malayalam Department at the Sanskrit University in Kalady, allegedly bypassing and overlooking several other better qualified and deserving candidates.

Nepotism and favoritism run deep in the CPM but in this case, there are other dimensions too. Earlier, while admitting his children to school (he has two kids) Rajesh had boasted on social media about his decision to leave the caste and religion columns blank in the school application forms. His detractors opposed it as a publicity stunt and opined that enrolling them in government schools and publicizing the same was nothing but a classic example of using children for party propaganda.

Ninitha is also an office-bearer of the Students Federation of India (SFI), the youth wing of the CPM. That she applied and was appointed to her new position using her Muslim background smacks of hypocrisy. The assistant professor position was reserved for Muslims and the fact that Ninitha is a Muslim, helped. Ninitha is the daughter of late Rasheed Kanicheri who in turn was a CPM area committee member and a former state general secretary of Kerala State Teachers Association.

The written preliminary examinations placed  Ninitha 212th in the PSC (Public Service Commission) rank list. By the time the interviews were over, she ranked 1st for the reserved seat! Why a seat in a Sanskrit University is reserved for a Muslim candidate is one of those mysteries unique to Kerala. After all, the state even has a government department for the ‘well-being’ of people who leave Hindu Dharma and accept Christianity – all hail Nehruvian secularism!

There are serious allegations of malpractices that led to Ninitha ending on top of the list. 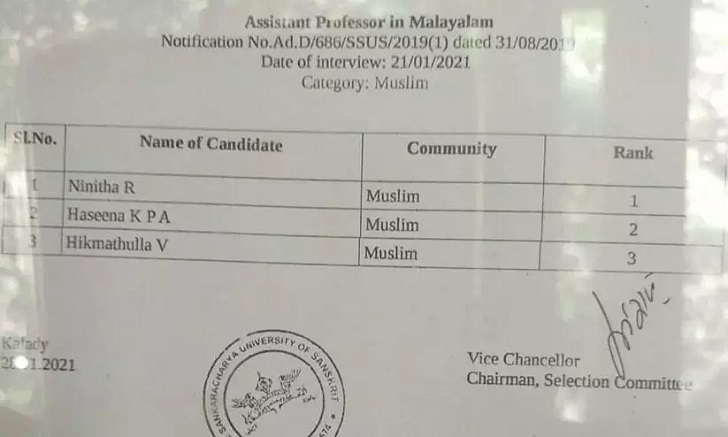 Prof. KM Bharathan and Prof. P Pavithran were the other two. The three have also written to the Vice-Chancellor and the Registrar informing them that Ninitha was not on the final list for the post. Astonishingly, all three Malayalam experts are CPM cadre.

The above-mentioned three were Malayalam experts and their opinion should have mattered. The rest were from the Hindi and English Department and the Vice-Chancellor. The fact that there were even college lecturers amongst the other applicants while Ninitha was only a school teacher has raised more eyebrows. Some have multiple research papers against their names while Ninitha has only one.

Meanwhile, Hikmatullah, the third rank holder in the list has approached the Governor of Kerala (also the Chancellor) and has complained of serious irregularities in the selection and interview process. Hikmatullah now wants the interviews to be held again. Save University Campaign Committee has also requested the Governor to conduct a thorough inquiry into this incident.

Earlier this year, Shahala the wife of another CPM MLA, AN Shamseer had tried to use the Muslim quota to find her way into Calicut University as an assistant professor surpassing other Muslim candidates. She had tried her luck at Kannur University in a similar manner two years back and her appointment was quashed by the court following complaints from the Save University Campaign members.

Communists, especially the ones with Hindu names, have an issue with caste and religion, but if they are Muslim or their spouse is one, they have no compunction in using that identity to milk the state.

CPM leader MB Rajesh is a former MP (2009-19), whereas the original version of the article conveyed he is a current MP. This has been corrected.