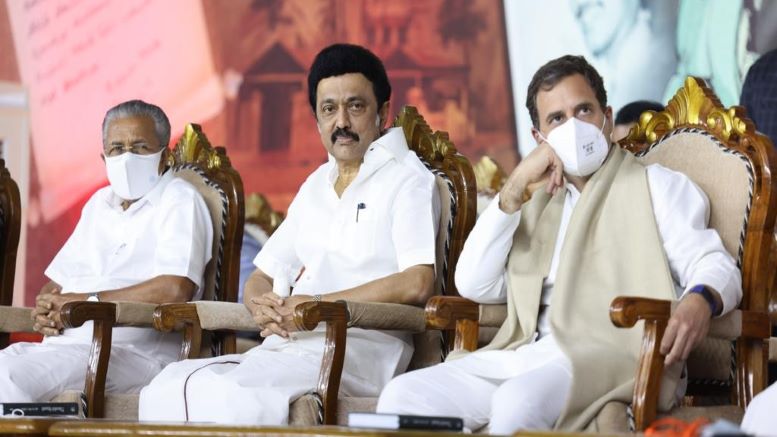 Expect Congress leader Rahul Gandhi to use every available opportunity to display his arrogance and absolute lack of knowledge. It was no different this them when he was speaking at the release of Tamil Nadu Chief Minister M K Stalin’s autobiography “Ungalil Oruvan” (One Among You) on Monday (February 28). The senior Congress leader, as is his wont, hit out at the BJP-led central government for what he termed as “snatching” away of Jammu and Kashmir (J&K)’s powers and bringing it under the ‘rule’ of bureaucrats from Uttar Pradesh and Gujarat.

Continuing his incoherent rant on federalism, Gandhi said the BJP dispensation at the Centre has enhanced the Border Security Force’s (BSF) powers in states without the consent of the state governments while adding that this has resulted in “hundreds of acres of land” in like Punjab being “taken away” by the central security force and added for good measure that the same would be repeated in Tamil Nadu (TN).

The Congress leader also alleged that Prime Minister Narendra Modi was “clueless about the history of Indian states and our diversity”. “Instead of listening to people’s voices and respecting our diversity, they have been imposing their agendas on different states. The voices of our people are not heard, not represented these days. Instead, the voices are being attacked, every institution such as the judiciary, Election Commission, and media are being attacked systematically. But BJP shouldn’t be living in their illusions. We know how to fight them; we will fight them because they fight our history and tradition. They cannot defeat us,” he said at the function attended by some leading Opposition figures such as Omar Abdullah and Tejashwi Yadav among others.

Gandhi only seemed to be reiterating what Abdullah had said earlier when he alleged that J & K was divided without the consent of its people and every like-minded party should unite to protect the “idea of India”. He also claimed that no state met this fate post-Independence and the same maybe later repeated in states like Kerala and Tamil Nadu. Yadav called for stepping up a campaign demanding reservation in judicial appointments. Interestingly, two prominent Opposition faces, West Bengal CM Mamta Banerjee and Telangana CM K Chandrashekar Rao were conspicuous by their absence.

It isn’t difficult to see why the Congress leader’s speech is problematic at several levels. By insinuating that J&K is being ‘ruled’ by bureaucrats from UP and Gujarat, he is at once trying to bring in the ‘BJP connect’ and at the same time attempting to de-Indianize the people of J&K. The newly carved union territory is under the governance of the Centre, in other words, Bharatiya citizens of J&K are being governed by the Bharatiya government.

Abrogation of Article 370 has integrated the citizens of the state with the rest of the country while Congress and its secular allies have always pitted one state against the other. While Gandhi claimed they believed in ‘unity in diversity’, what kind of unity does one promote while placing the regional identity above that of one’s identity as a Bharatiya?

The former Congress chief had made similar comments during his motion of thanks speech in Parliament. His address in the Loksabha brought Congress’ covert support to the ‘tukde-tukde’ gang out in the open. His speech, where he said Bharat is a ‘union of states’, is ample proof of the partisan politics of Congress which is continuing the divide and rule policy of the British. Gandhi was speaking the language of leftists-separatists where he promoted regionalism rather than a unified concept of the country.

Similar divisiveness is seen in the demand for “United States of South India,” which pits Delhi against the South. It is in this context that we must see Gandhi’s particular reference to Tamil Nadu and the subsequent support to his view from Dravidianist Stalin. Not surprisingly, the DMK supports Congress’ divisive views. Separatism has been the foundation of the Dravidian movement which saw it instigate members of the state against Hindi.

The same kind of regionalism is apparent in TN CM Stalin’s attempt to run a parallel evacuation by forming a TN government team that would travel to the four countries where four Union Ministers were already present to oversee the evacuation.

Congress has always played dirty tricks to hold on to power but by sowing seeds of divisiveness, the party is plumbing newer depths. Stalin’s book launch simply became another opportunity for regional parties to further their sinister regional agendas.

While it is not certain how the Gandhi scion concluded that PM Modi had ‘insulted’ Tamil Nadu and the country, he along with his allies surely appear to have insulted the country by constantly emphasizing regional identities and placing it above that of one’s identity as a Bharatiya.