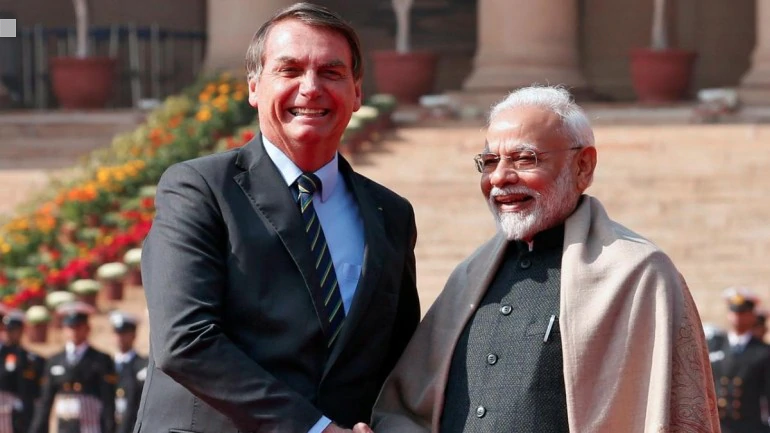 Brazilian President Jair Messias Bolsonaro has written a letter to PM Narendra Modi thanking him for easing restrictions on export of hydroxychloroquine (HCQ) drug which could potentially be useful in fighting the Covid-19 pandemic. Bolsonaro compared Bharat’s move to allow export of HCQ to Sri Hanuman’s act of getting the ‘Sanjeevani booti’ herb to treat mortally-wounded Lakshman in the epic Ramayana.

Brazilian President Bolsanaro invokes Lord Hanuman and the legend of sanjeevini booti while seeking help from India to fight COVID-19.

“Just as Lord Hanuman brought the holy medicine from the Himalayas to save the life of Lord Rama’s brother Laksmana, and Jesus healed those who were sick and restored the sight of Bartimeu, India and Brazil will overcome this global crisis by joining forces and sharing blessings for the sake of all people,” President Bolronaro said in his letter to PM Modi.

Bharat has received requests for the anti-malarial drug HCQ from 20 countries, as some medical researchers have claimed HCQ along with antibiotic Zithromax, or azithromycin could be  effective in preventing or treating Covid-19. Trials are currently ongoing to test the efficacy of this drug combination in battling the Coronavirus    pandemic that has infected 1.4 million people and killed nearly 82,000 around the world.

Indian Council of Medical Research (ICMR) has recommended the use of HCQ for treating healthcare workers handling suspected or confirmed coronavirus cases and also the asymptomatic household contacts of the lab-confirmed cases.

On March 25, Bharat’s Directorate General of Foreign Trade had banned exports of HCQ except from SEZ (Special Economic Zone) and EOUs (Export Oriented Units) to fulfill pre-existing contracts. On 4 April, the government tightened the export restrictions by including SEZs under the prohibition amibit. However, this was later over-turned and the Ministry of Commerce informed Indian Customs to allow export of HCQ and honour previous contracts.

While easing restrictions on HCQ export, Bharat has said it would stockpile enough of the drug for domestic use before allowing exporters to start servicing previous orders. The decision on who to export to (and how much) will be taken by the department of pharmaceuticals.

On Saturday & Sunday, US President Trump had called PM Modi to request that Bharat allow export of the HCQ drug to USA. Other countries, including Brazil, too made similar requests. On Monday, there were many reports that Government was almost certain to relax the blanket ban and allow HCQ export on case-by-case basis. Early the next day (i.e. Monday evening US time), Trump had a press conference in which he was asked if Bharat’s decision to stop export of HCQ was retaliation for US stopping export of medical goods. In a rambling reply, Trump said at the end ,”If he (Modi) doesn’t allow it to come out, that would be okay, but, of course, there may be retaliation.  Why wouldn’t there be?” It wasn’t clear whether he was talking about Bharat’s stopping HCQ supplies as ‘justified retaliation’, or talking of ‘US retaliation’ if Bharat did not supply HCQ.

Tuesday morning, many mainstream media outlets in Bharat went to town shouting “Bharat caves in to US threats.” Driven by anti-Modi hate and a proclivity to knee-jerk hyperventilation, these ‘liberal’ media outlets did not pause to reflect that the Government had taken a measured approach of first ensuring domestic supplies before exporting the drug to other countries as part of its international obligations.

Similarly, the reference to Ramayana by the Brazilian President shows how the entire world identifies Bharat as a Hindu/Dharmic country, except for the left-liberal ‘Hindu’ elite in Bharat which goes into an apoplectic fit at the very mention of the idea.