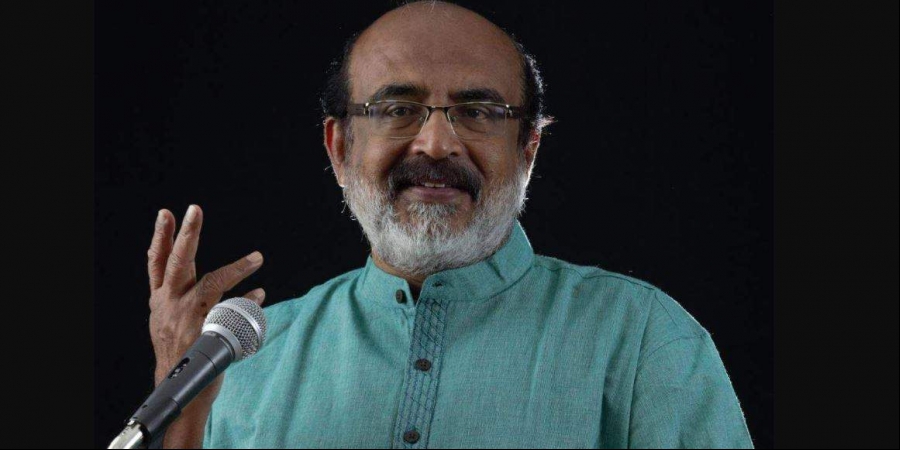 Anti-Hindu bigotry has gone so mainstream among all strata of society that it has ceased to surprise us when such views are expressed about Hindu gods and festivals.

Thomas Issac, the Finance Minister of Kerala belonging to the Communist Party of India – Marxist (CPM), posted an Onam message on Twitter saying that Vamana ‘cheated’ Mahabali. He hurt the majority sentiments by mentioning that Vamana, an avatar (incarnation) of Mahavishnu, is a ‘cheat’. Hindus reminded Issac that Mahabali was an ardent devotee of Bhagwan Vishnu. They also pointed out the fact that Mahavishnu only wanted to quell Mahabali’s ego and test him, and in fact returned back everything he had got.

To expect good from self-professed atheists like Issac who are known for their Hinduphobia is like wishing for the moon. This is not the first time that he has hurt Hindu sentiments and this is probably not the last time either. He had earlier said that Sabarimala devotees are ‘scoundrels who chant dirty words’. Those earlier utterances were reversed when he went all out to ask for forgiveness when elections arrived.

It is pertinent to note that such ‘atheists’ are not seen or heard expressing such hate and contempt for the globally dominant Abrahamic religions of Islam and Christianity, or even the other Dharmic religions like Sikhism, Jainism, Buddhism etc. It is only Hindu Dharma which is the express object of their hate.

No apology has been forthcoming this time around from Issac as yet. But just a simple apology will not suffice. Such bigots have taken advantage of Hindu tolerance and forgiveness many times in the past. Issac Thomas must be sacked and arrested – legal action must be taken against him to send a clear message to others of his ilk. Because it is not just Thomas – all and sundry including nuns, pastors, and Members of Parliament have attacked Hindu beliefs on Onam, some of it covertly.

The Principal of St. Theresa’s High School at Nedunkunnam near Kottayam, Saliamma Thomas, was delivering an Onam message to her students and their parents through a Whatsapp video message. She said that Onam is the gospel of someone who gets kicked. It is the story of the receiver of benefits kicking the giver, in this case, Vamana being the ‘ungrateful receiver’. She adds that the world over whoever has been ready to give or share has also been at the receiving end once the sharing is over. She added that an excellent example of this is Jesus who had come to spread truth, equality, love, and freedom. He is an excellent example of the rise of the downtrodden even in today’s world, she adds.

Saliamma’s message did not go down well with Hindus which forced her to issue an apology later, but the damage had been done by then.

Hibi Eden, a Christian Indian National Congress (INC) Member of Parliament from Ernakulam, too vented his Hinduphobia over Onam. His late father George Eden also was an MP from the same seat. Eden was replying to a tweet by Aam Aadmi Party’s (AAP) leader Arvind Kejriwal wishing Vaman Jayanti ahead of Onam. Eden’s reply turned into a political rant accusing AAP of freebies, and claiming Kejriwal was ‘distorting culture, history, traditions’ and acting as B-team of BJP. When questioned on whether Hindu Malayalees need his permission to celebrate Onam, Hibi turned aggressive. He was also reminded that Onam is a Hindu festival where an avatar of Mahavishnu appeared in the form of Vamana. He was also asked why he with his Christian background was getting involved negatively with Hindu festivals and what rights he had to speak about the matter. The reply was “get lost….with our rights”. 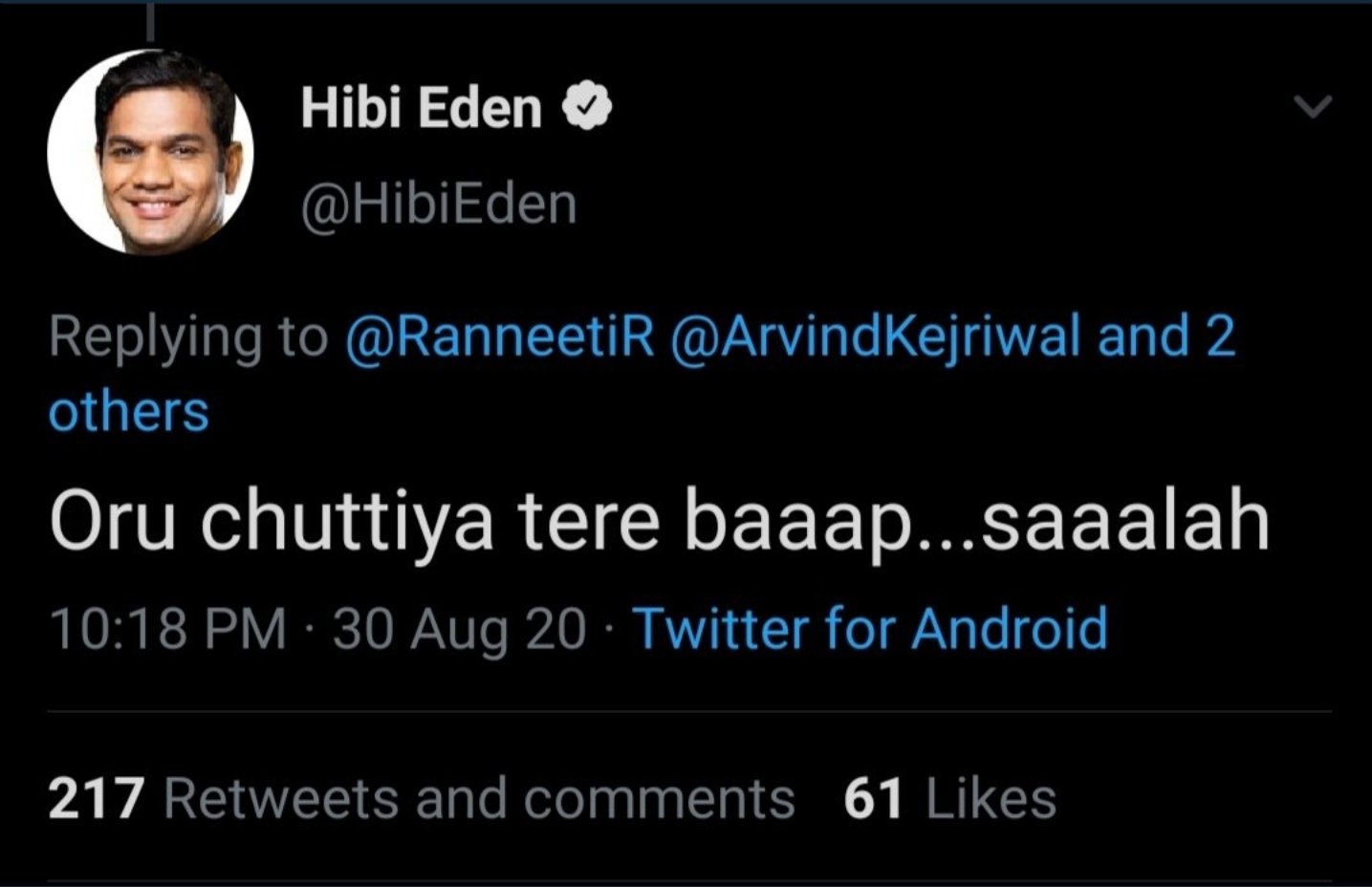 How does one describe such hate for Hindu Gods and the attempt to separate Hindus across the country along fabricated fault lines? Sample this article for The Quint by a radical Islamist-supporting Malayalee ‘Hindu’ Aditya Menon in which Vamana is projected as a ‘Brahmin’ boy who ‘tricked’ the ‘asur’ (demon) king Mahabali. His logic – Kejriwal is wishing Vaman Jayanti to appease Brahmins and upper caste of North India who form his votebank, whereas Kerala celebrates the returns of their iconic ‘sub-altern’ king Mahabali!

But the truth about the festival as explained in a twitter thread by True Indology, shows how anti-Hindu bigots and communists have systematically tried to divorce Onam from its Hindu roots –

“Vishnu comes to test Bali’s generosity. He becomes satisfied & grants Bali any boon he wishes. But Bali has only one wish. To always be with Vishnu. Vishnu grants the wish. He leaves Vaikunta and repairs to Bali’s new abode Sutala where there is no fear, hatred, disease

For all that nonsense about ‘Aryan’ Vamana and ‘Dravidian’ Mahabali. Here is a pre-modern painting from Mankot (c.1700) The dark skinned dwarf is beautiful Vamana. And the Brahmin with choti in the painting is none other than Mahabali. Mahabali was descendant of Rishi Kashyapa.”

It must be noted that another much-celebrated ‘moolnivasi’ icon Ravana was also a Brahmin who allowed his ego and base nature to take over, and hence was defeated by another avatar of Mahavishnu, Bhagwan Ram.

How long will anti-Hindu bigotry be allowed and tolerated in Bharat? Hindus should not take things lying down anymore. Multiple cases are being registered against such people which should make them desist from making such statements in the future. For starters, all of us should join hands in demanding that Isaac Thomas and Hibi Eden are condemned by their own party leaders.