Beware Khan Market Gang, it still rules on the sly 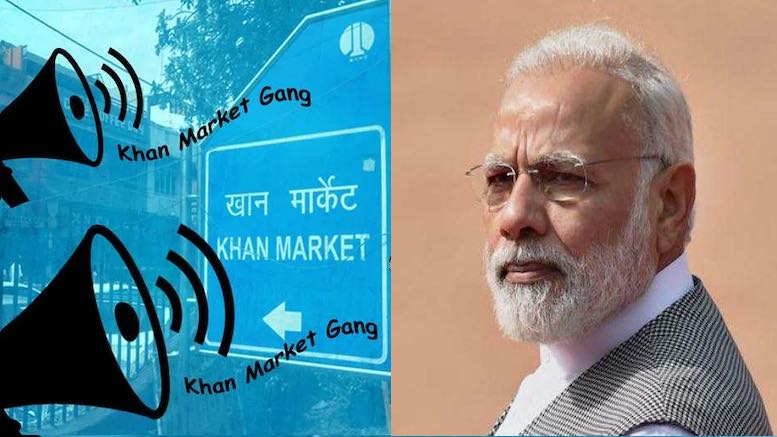 Not many on the Right attach much importance to the colored opinions of Left-leaning intellectuals like the Nobel winning Amartya Sen. What, however, still rings true is an observation he made in a signed article for the New York Times (24 May 2019) after Narendra Modi’s stormed back to power.

Sen opined that the “Hindu nationalist movement has won something in terms of power but nothing particularly serious in the battle of ideas”. He hit where it hurt. Because the battle of ideas cannot be won without taking on the privileged bunch of influence peddlers whom Modi contemptuously called the Khan Market Gang (KMG). Bharat’s Right lacks the intellectual firepower to match the parry and thrust of debate both inside and outside Parliament despite being in power.

This is a bitter reality which the party’s ideologues at the RSS headquarters in Nagpur realize but choose to ignore. There is little they have done in the last seven years to put up even the semblance of a contest. Modi himself is not wholly above seeking the validation of the liberal lobby. The late Arun Jaitley once told this writer rather nonchalantly that the backing of 50 movers and shakers in Lutyens Delhi is all it takes to get things done.

Poor messaging and PR is the main reason why a fractured Opposition continues to put the government on the defensive with relative ease. Hence, the widely prevalent opinion that the BJP with 303 Lok Sabha seats is in power, but the Congress with 52 still runs the country. How did such an impression gain currency. More importantly, why was it allowed to?

The 2014 general election was positioned by Narendra Modi’s publicists and poll managers not just as one aimed at a change in government, but a change in the ideological moorings of governance. A clean break with the rotten Nehruvian consensus is what had been expected coupled with the fostering of Rightist socio-political reforms.

Rolled out in modest dollops instead was a cleaner version of the old model focused on economics alone: ease of doing business, financial empowerment of the poor, job creation, collaring big loan defaulters, curbing black money, corruption, cronyism, revival of  manufacturing, and unspooling schemes like Swacch Bharat, Ayushman Bharat, and the ambitious Goods and Services Tax. All impressive initiatives which a party voted to power on the promise of bringing acche dinn was duty bound to fulfil. But even this did not come sans a stumble.

The decision to shelve the Bill for the acquisition of land for industry and public works in April 2015 showed Modi could be blackmailed into submission. The retreat was the consequence of a foolish gibe (suit-boot ki sarkar) emanating from a bird-brained member of the Congress’ ruling clan. Modi backers had good reason to be disappointed. They never thought he could be brought to his knees so easily.

Hopes of Bharat’s first rightist regime implementing one or two of its pet political reforms putrefying on the party’s manifesto for decades were consigned to the backburner. Failure to leave an ideological footprint was the most glaring shortcoming of Modi One. Setback on the land bill compelled him to play safe by sticking to welfare. None of the economic reforms were ideology driven per se. The best of them take time to bear fruit compared to political transformation which has an instant impact. Poll defeats in Bihar and Delhi proved the point. But for the Balakot derring-do, the BJP may have missed the 272 mark in 2019, the PM’s personal popularity notwithstanding.

Modi had a legitimate excuse for not pushing in big ticket political reforms like the deactivation of Article 370 or the Citizenship Amendment Act in his first term. There were too many landmines on the way and limits on how much he could have taken on his plate without inviting a backlash vicious enough to endanger his political future.

Rehauling education, however, held no such risks. Its supreme neglect angered many. Directing the HRD minister to defenestrate NCERT’s school texts on history with their pseudo-secular slant is the least which ought to have been done. It would have signaled the ideological shift. This, in fact, is precisely what Arjun Singh did on being appointed HRD minister in UPA-1. It was among his first decisions.

Truth to tell even the New Education Policy 2020 falls woefully short of expectations. That the BJP/RSS had no intention of making deep-seated changes in the policy was evident from the remarks made by Prakash Javadekar, then HRD minister. The light weight minister told Delhi’s secular commentariat with latent pride in 2018 that the government had done nothing to promote the saffron worldview in school curricula.

Handing back the management of Hindu temples to the community ought to have been next on the agenda (it is still not) with the proviso that a sizeable portion of the donations be invested in opening centers of educational excellence exclusively devoted to furthering Hindu culture, especially the teaching of Sanskrit.

Modi’s contempt for the KMG gave the impression that the old intellectual elite had been put in place if not vanquished when nothing changed in essence. Fear of the liberal elite and their global influence still gnaws at Modi’s heart. It was behind the signal failure to firmly deal with the Shaheen Bagh agitation over the Citizenship Amendment Act in early 2020, and the recent Khalistani shadow over the continuing protests of rich Sikh farmer against the new farm laws.

The regularly irregular efforts to disrupt the peace would never have been possible without the gang’s not-so-secret backing if not outright complicity. An entire eco-system continues to work overtime to destabilize a government whose anti-Leftism more than rightism they have still not come to terms with. They predominate the bureaucracy, courts, media, think-tanks, varsities, NGOs, and virtually every opinion shaping agency. Opposition to all things rooted in the country’s ancient past is the common gene in their DNA. Their bugbear: anything which reeks and smells Hindu.

Broadly speaking the Khan Market Gang and their ilk are remnants of the babu culture fostered by the British. The 19th century Bengali novelist Bankim Chandra Chatterjee penned a jocular essay on their character and demeanor. Though dated, the basics still hold good: aversion to their own religion and mother tongue, love for anything English (read western), physically weak but never lacking the strength to write or preach.

The babus began as clerks but went on become doctors, lawyers, judges, zamindars, newspaper reporters, even colorful idlers whose principal occupation was adda. Addiction to books, booze, gluttony, and libertinism is the key to their survival. Babus, indicated Bankim, educate themselves to advance their careers and advertise their scholarly credentials, seldom to enhance their wisdom or understanding of life. Know-alls (shob jaanta) is what they wished to be regarded.

The renowned historian, Tapan Raychaudhuri, wrote babus were the “first Asian social group of any size whose mental world was transformed through its interactions with the West…babus believed that being educated in Western literatures and possessing qualities such as suavity, sophistication, and progressive-mindedness — traits often associated with the British rake – would earn them the admiration of the British.

Little did they know that sahibs used the term “babu” to show their contempt for the copycats. Babus, wrote Krishna Datta, aroused the ire of their contemporaries even during the British Raj with their haughty and iconoclastic conduct, speaking and writing only in English, wearing only European clothes, drinking, eating beef, even converting to Christianity. Babus remain adept at weaning themselves into the confidence of those with whom they have never had affinity, ideological or otherwise.

Take the case of Atal Bihari Vajpayee’s principal secretary and the nation’s first National Security Advisor, Brajesh Misha. Son of a staunch Congressman, D.P. Mishra, who was chief minister of Madhya Pradesh between 1963-67, he quit the Indian Foreign Service after serving as Bharat’s permanent representative at the United Nations. Between 1981-87 he was in the service of the UN. Not once did he show any overt faith in the BJP’s ideology, but had no qualms in accepting to be head of the party’s foreign affairs cell in 1991. Eight years later he became the most powerful man in the Prime Minister’s Office.

Mishra again changed political gears when the UPA came to power in 2004. Persuaded by Manmohan Singh, he backed the Indo-US Civic Nuclear Deal despite the BJP’s opposition. He died in 2012 but not before being bestowed the Padma Vibhushan by the UPA. Mishra was the quintessential babu with no hard loyalties except to his own interests.

Then there is the case of his cousin Rishi Kumar Mishra, editor-in-chief of the defunct Patriot, a Soviet mouthpiece published from Delhi. Such was his allegiance to Russia that it earned him the cognomen “R K Mishrov”. When the Patriot was on its last legs, the hardcore leftist promptly became an Ambani acolyte. He was the founder member of the Dhirubhai funded think-tank, the Observer Research Foundation (ORF) in 1990 as well as the editor-in-chief of the Observer Group of Publications. Many were the sensitive foreign assignments he undertook when his kin virtually presided over the nation’s destiny during the Vajpayee years.

These are stray examples on the ways of the babus. The KMG is their modern face. The courts are choc-a-bloc with them. A casual scrutiny of the slanted decisions emanating from the Delhi, Bombay, and Allahabad HCs make it evident. The national interest is seldom on the minds of judges. One of the Supreme Court’s longest serving and controversial chief justices, KG Balakrishnan (2007-12) began his career as a sessions judge. The blessings of a former President propelled him to the high court to pave the way for his appointment to the SC in 2002 during the NDA era.

Not till the upper echelons of the bureaucracy and courts have been cleansed of KMG adherents is Right rule possible. The battle for Bharat’s soul cannot be won till they are isolated. Electoral victories alone cannot ensure it.