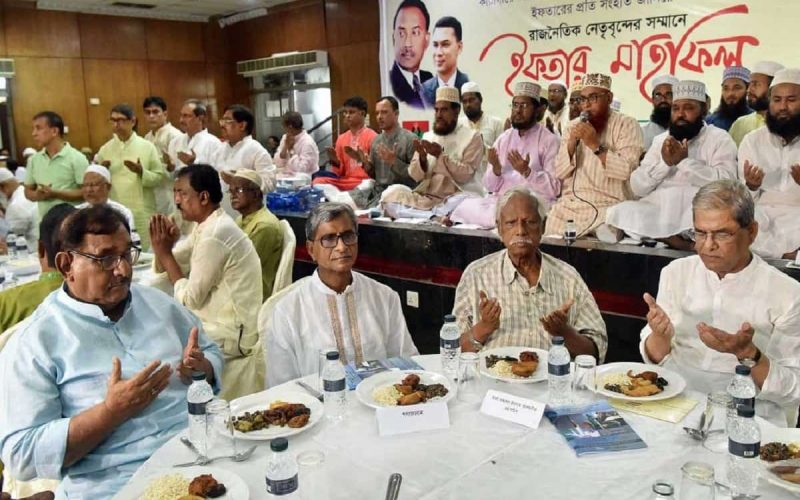 Outraged with “serving beef” to Hindu attendees of an Iftar event hosted by the Bangladesh Nationalist Party (BNP), the pro liberation BNP leaders seeking anonymity have said that they love to stay with the party and its ally, but not with pro-Pakistan Jamaat-e-Islami or any such party.

Jamaat-e-Islami has tried to restore the “Pakistan military-fundamentalist model of radical Islam” but failed, they asserted. BNP, the Opposition party in Bangladesh is said to have hosted non-Muslim community members with beef at an iftar event. The incident has sparked a sharp criticism on social media.

The Sylhet unit of BNP arranged the iftar party, attended by at least 20 leaders and activists from the Hindu community on Thursday. All the plates were served with traditional items alongside beef while no exception was made even for the Hindu attendees.

Outraged at the insensitivity, local unit Hindu participants from the party took to Facebook to condemn the organisers. “In absence of any separate arrangement, I, like 20 other Hindu colleagues, had to watch all the Muslim leaders and activists breaking their fasts,” wrote Muntu Nath, a local leader of an affiliated body of BNP, summing up his anger for being invited at the event.

Terming such an arrangement “a farce” with the colleagues from other community leaders, Kanak Kanti Das, a local leader of BNP’s student body, wrote “you enjoyed your iftar and we (Hindu invitees) were simply looking at it”.

Without offering any apology, BNP Sylhet district leaders later acknowledged the “mishap” as some activists on social media questioned the motive behind it.

Media personalities also said the military rulers who had taken over and ruled Bangladesh for 15 years legitimised the pro-Pakistan Jamaat-e-Islami, introduced constitutional amendments that undermined the country’s secular democratic polity, and finally declared Islam as the state religion of Bangladesh.

Even during the last rule of the BNP, back from 2001 to 2006, the emergence of Tarique Rahman as the de facto leader of the party emboldened the Islamists in a systematic land grabbing from Hindus let alone attack on temples and businesses and rape of Hindu girls.

Even while in Opposition, BNP has been accused of aiding Jamaat in perpetrating biggest attacks on Hindus centering war crimes trials. Afterwards, in other major incidents of attacks on Hindus including the recent attacks on Durga puja, involvement of the BNP Jamaat backed people had been blamed by the Awami League leaders.