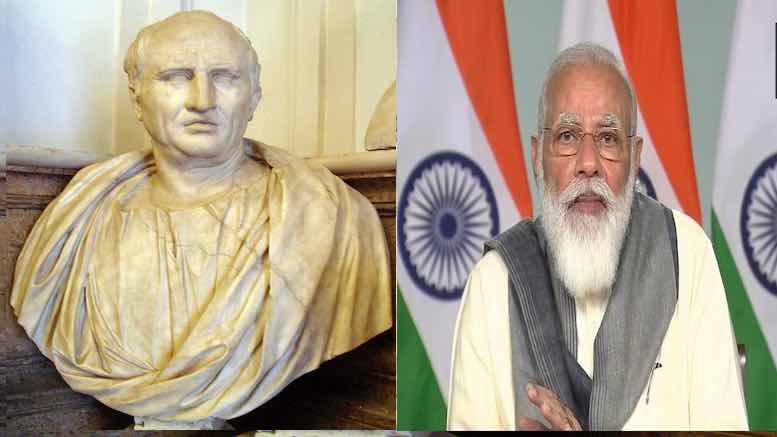 Forwards unleashed by the vicious WhatsApp university are often willfully misattributed to historical figures to draw the attention of readers. One which recently landed in this writer’s inbox claimed its authorial origins to the Roman senator, lawyer, political theorist, priest, philosopher, and wit Marcus Tullius Cicero (BCE 106-44). It is a riveting read:

“A nation can survive its fools, and even the ambitious. But it cannot survive treason from within. An enemy at the gates is less formidable, for he is known and carries his banner openly. But the traitor moves amongst those within the gate freely, his sly whispers rustling through all the alleys, heard in the very halls of government itself. For the traitor appears not a traitor; he speaks in accents familiar to his victims, and he wears their face and their arguments, he appeals to the baseness that lies deep in the hearts of all men. He rots the soul of a nation, he works secretly and unknown in the night to undermine the pillars of the city, he infects the body politic so that it can no longer resist. A murderer is less to fear.”

The stinging takedown of internal enemies, though nowhere to be found in Cicero’s treatises and orations, is an accurate summation of his thoughts on the need to protect the national interest in times when the republic’s existence comes under severe stress. This is exactly what he might have said about the conspiratorial designs of the Break-Bharat brigade since 2014.

The quote, which paraphrases Cicero’s philosophy, has been cleverly culled from Taylor Caldwell’s historical novel, Pillar of Iron (1965), based on the life of Cicero. The best works of the British born American novelist (1900-85) are plotted around historical events and characters. One, Dear and Glorious Physician, is about Saint Luke; another, The Earth is the Lord’s, on Ghengis Khan.

Cicero’s contemporary fame rests on his essays and epistles as much on his rhetorical talent. Four of his most brutal orations were delivered to expose the famous Catiline conspiracy ably documented by the contemporary Roman historian, Sallust.

Lucius Sergius Catilina (‘Catiline’ in English), a disgruntled, bankrupt aristocrat, was desperate to be consul when the post was up for grabs in BCE 63. He lost out to Cicero who became the youngest to hold the top job. This, despite no roots in politics. Cicero transitioned to politics during his early 40s after successful stints as quaestor and praetor (judicial officers).

Ousting Cicero was the sole aim of the plot Catiline hatched with the backing of treacherous patricians and plebians reduced to irrelevance and bankruptcy. Among his key allies were veteran supporters of Sulla (BCE 138-78), the great general and Rome’s first dictator who had seized power in 82 after a bitter civil war. Catiline sought to step into Sulla’s shoes.

The socio-economic situation in Rome was explosive after successive wars, both internecine and foreign. The countryside was astir. Insecure farmers gravitated to the city in large numbers. Catiline goaded them to join the rebellion to secure their financial future. The plan, wrote Mary Beard, author of SPQR, a groundbreaking history of ancient Rome published in 2016, was to assassinate Rome’s elected officials, burn the place down — and write off all debts of the poor and rich.”

Cicero not only broke the back of the conspiracy, but also got the five leading conspirators quartered, Catiline included. They were done to death on his orders. In doing so he saved the state. It was his finest hour.

Though the executions had the broad support of the Senate, even earning him the sobriquet pater patriae (father of fatherland) from Cato the Younger, there was one notable dissident: Gaius Julius Caesar. He advocated imprisonment of the offenders followed by a regular trial, but his recommendation was rejected. Cicero’s counter that enemies of the state forfeited the right to be tried under Roman law did not go down well with Caesar who had backed Catiline for the consulship. False rumors that Cicero favored abolishing the Senate earned him the hostility of colleagues, especially the First Triumvirate of Caesar, Pompey, and Crassus.

The Catiline conspiracy was among the ten biggest in the last century of the Roman republic which ended with the assassination of Caesar in BCE 44 before its formal demise 17 years later.  Though Cicero had no hand in Caesar’s murder, he was executed on the orders of the victorious Second Triumvirate comprising Mark Antony, Octavius (later Augustus) Caesar, and Marcus Lepidus.

Julius Caesar had during his lifetime repeatedly tried getting Cicero to back him, especially after falling out with Pompey, but was refused. This earned him the wrath of Antony, an ally. Rumors that Cicero had ‘celebrated’ the gruesome killing of Julius gave Antony an instant excuse to rub him out. Cicero was beheaded.

Modern historians agree had Cicero taken a tougher line against the radical minded Caesar, Rome might have survived as a republic. He was a victim of his high ethical standards. Prodded to act against Caesar whose soft corner for Cataline was no secret, he refused for lack of clinching evidence of his complicity in the conspiracy.

The swirling treacheries in BJP-ruled Bharat bear striking parallels to the political situation in Rome between in BCE 63. Two decades is all it took for the extinction of the republic and the advent of Caesarian rule. The moral fiber of Narendra Modi, an outsider to power, is as durable as Cicero’s. Buffeting him is not one Catiline but several. The machinations of internal enemies are multiplying. Modi’s reluctance to act against them has begun to seriously impinge on the national interest.

The toolkit conspiracy with its global ramifications is only the latest in the long line of complots which began with the disorderly activities of the tukde-tukde gang comprising urban Naxals, jihadis, and Leftist the award-wapsi brigade. Tukde-tukde paved the way for more ambitious assaults on the body politic like Shaheen Bagh which in turn generated the Delhi riots. The Jat-Sikh farmer agitation proved a godsend for Khalistani elements abroad to fish in Bharat’s troubled waters. It culminated in the attack on the Red Fort and the desecration of the tricolor.

Armchair intellectuals of the Left have been at pains to assert that there is nothing in the toolkit to suggest its designers had anything seditious on their minds. Especially the 21-year-old environmental activist, Disha Ravi, who was arrested from Bangalore for editing out portions of the google doc which may have betrayed the treasonous intent of the group. Much stress was laid on her age, her sweet nature, not to speak of her love for tofu and furry pets. This is typical of bleeding hearts ever ready to push the victim card.

That the events of January 26 were an exact replay of the action plan laid out in the toolkit bolsters the evidence against Disha and gang. There is no point in dwelling on the role of Greta Thunberg, a mentally disturbed school dropout who is nothing but a tool in the hands of the vicious Left-Liberal circuit out to spread anarchy in the name of human rights and opposition to regimes with strong nationalist governments.

What is relevant is not so much the toolkit as the association of their authors with disaffected guys like Dhaliwal who has links with the Sikhs For Justice (SFJ) foundation, a body managed by a branded terrorist named Gurpatwant Singh Pannu. An FIR had been registered against the SFJ by the National Investigation Agency well before January 26 when the plan to cause large-scale disruptions, damage to government and private properties and block essential services was revealed.

Is any further evidence necessary to establish that the girl who loves tofu and walk her dog was keeping bad company?  A popular liberal counter when confronted with the unpalatable truth is that Bharat’s democratic foundations are not so fragile that they cannot sustain occasional attacks from misguided elements.

The reality is the exact reverse. The attacks are no longer occasional, and the elements no longer misguided. Internal enemies now work to well mapped out plans laid out in toolkits. And as the PM told a Vishwa Bharati congregation: “There are some highly educated and highly skilled persons among terrorists.”

Rome was neither built in a day nor collapse overnight. It took a series of conspiracies from internal enemies to weaken its fabric before the life of the Republic was snuffed out in BCE 27 with the coronation of Augustus, the first Caesar of the mighty Roman empire which lasted 500 years. But it is the Rome of Cicero’s days which is still more read about and remembered.

Wrote Professor Beard, “The events of BCE 63, and the catchphrases created then, have continued to resonate throughout western history. Some of exact words spoken in the tense debates that followed the discovery of the plot still find their place in our own political rhetoric and are still paraded on the placards and banners, and even in the tweets, of modern political protest.”