BJP candidate from Keshpur goes missing after attack on convoy? 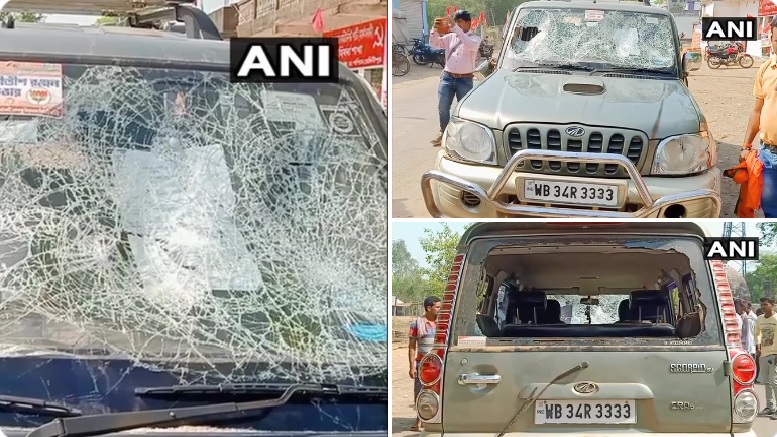 The convoy of BJP candidate from Keshpur, Pritish Ranjan Kuar, was attacked today morning in Paschim Medinipur district, West Bengal. Keshpur is one of the 30 constituencies going to polls today.

Moreover, Asianet News Bangla has tweeted that the candidate himself is missing, with his phone switched off, and police are conducting a search in the village where the attack took place.

While we have not been able to corroborate this account, many media outlets have confirmed the attack on a BJP convoy and polling agent in Keshpur. A woman polling agent of BJP at booth number 173 in Keshpur was beaten up, allegedly by TMC workers and local BJP leader Tanmay Ghosh’s car was vandalised.

A woman agent of #BJP candidate in #Keshpur, Pritish Ranjan Kuar, was attacked and her vehicle was vandalized allegedly by #TMC earlier this morning in West Medinipur. #WestBengalPolls @indiablooms pic.twitter.com/5rMXR1XyVb

As per an India Today update, “Local media channels from Bengal showed BJP leader’s convoy attacked with stones and sticks in Keshpur. A media vehicle in the convoy has been vandalised with its windshield broken in pieces. Videos of the incident show men armed with sticks chasing the vehicles and hitting them.”

Pritish Kuar is the candidate from Keshpur assembly constituency where he is up against sitting MLA Seuli Saha of Trinamool. In the 2016 assembly Elections, Saha beat Rameswar Doloi of CPI(M) by obtaining 71.63 % of the votes.

Attacks on BJP workers have been quite common in West Bengal – atleast 120 have died in just the last 2 years. Many BJP candidates were killed or intimidated during the 2018 panchayat elections, resulting in TMC winning a record 34% seats ‘uncontested’. But many pillars of our democracy – Election Commission, Supreme Court, media – downplayed the violence and none took cognizance in time to correct the farcical murder of democracy we witnessed then.

An attack on and alleged disappearance of an opposition MLA candidate, despite the heavy presence of central security forces during the ongoing WB assembly elections, should worry everyone who believes in democracy.