Recently a fake photo of the Uttar Pradesh chief minister, Adityanath Yogi, showing him drinking a cow’s urine directly from a cow had made the rounds. One of the persons who was taken in by the fake, and retweeted it, was the journalist, Tavleen Singh.  She said: 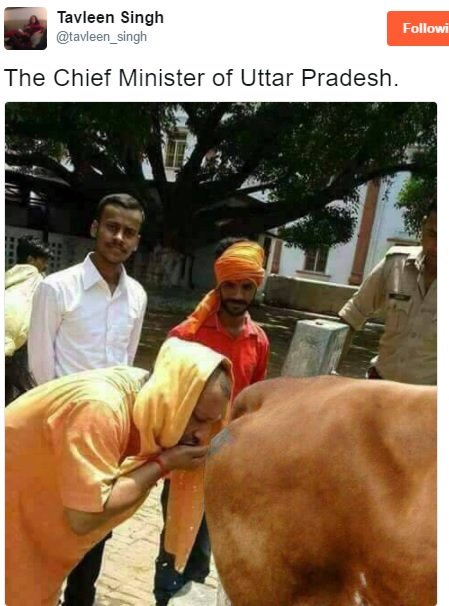 The Hindutva Troll Army (HTA) brought to her notice that this was a fake, and suggested to her that she should delete the tweet.  She followed this advice, but not before she tweeted as follows:

There is a huge amount of arrogance and insincerity in the above tweets.  The picture in question looked genuine to her because she wanted to believe that it was genuine.  And the reason for this is a deep dislike for Yogiji, which was very clear from the day that he was elected as the chief minister of Uttar Pradesh.

But this deep dislike is not restricted to Singh – it is a class issue.  Sanjay Dixit, I think, has made a pertinent observation, when he tweeted:

Wanting to believe is a very natural instinct for people.  It also happens quite regularly amongst the Hindutva Troll Army (HTA).  However, it becomes a tragedy and a farce when the disease crept so virulently amongst those who occupy the intellectual space.  Such people are expected to not only think, but also question.  And they are supposed to do research and verify information that they receive.  If they go about their task on basis of perception, and not data, then they will be seriously misleading people who otherwise think that they are telling the truth.

Amongst the HTAs, there are some who believe that Barkha Dutt has been married thrice – and all of them to Muslims from the Kashmir Valley. If she did, then it would not remain a secret. But that is what these members of the HTA would like to believe.  At the same time, I think there are a sufficient number of HTAs who have disputed this ‘fact’.

Then we have the case of people believing that the claim of USA that their astronauts have landed on the moon is fiction, and that the scenes shown on TV were done in a studio.  An open society cannot hide such falsehoods for any stretch of time.  But those who have an antipathy towards the USA, and those within the USA who obsessively think that their governments will always mislead them, want to believe such bizarre conspiracy theories.

Recently, the foreign media lapped up the propaganda of the Pakistani Army that the surgical strike that the Indian Army had conducted against the terrorist camps in Pakistani Occupied Kashmir were a mirage. It is because they wanted to believe that Bharat is not capable of undertaking such an action – or perhaps they were upset that Bharat had what they would consider to be gumption to do it.

During the recent UP election campaign, based on a photograph, Rajdeep Sardesai angrily announced that the Vice Chancellor of Benaras Hindu University was taking part in a rally for the the BJP.  When he found that the picture was fake, he deleted the tweet, sheepishly saying one does not know what to believe.  It was actually a question of wanting to believe.

Today, all over the world, a lot of what is written and said by those occupying the intellectual space, relating to social and political issues, is biased. The left wing people are guilty of this offence and they have been impacting the headlines in the media, primarily because of their control of the gates through which the information flows.  So, when there are writings that seriously disputed their perspective, they have censored the information.

Social media has changed the situation drastically, and the gates are being bypassed through large breaches in the walls.  The disease of wanting to believe has also spread amongst the HTAs, as in the case of Dutt’s marriage.  I would like to believe that this is restricted to the fringe, and not amongst the high profile members.  I do not think you will see the equivalent of Singh and Sardesai amongst the HTAs, who indulge in the ‘wanting to believe’ syndrome.  Most of the HTAs feel that indulging in such tactics, actually minimises the impact of the arguments made in other serious matters.  Because many in the left-wing use the stray incidents to indulge in playing the victim.

A favourite ‘wanting to believe’ game is being played in alleging that the media in Bharat today has become an extension of the publicity wing of the present government in general, and the BJP (as the ruling party) in particular. (Okay, I am exaggerating, but am not really far off.)  There is no evidence that is offered, except some stray articles that appear in the mainstream media giving the perspective of the government and the BJP.  Sagarika Ghose tweets:

The hilariousness of this outlandish assertion is that she herself is now with The Times of India, which is the largest English language newspaper in Bharat, and she writes fearlessly against not just the government and the party, but also against many Hindu organisations like the one I am actively working for.  And Sardesai, her husband, works for India Today group, which publishes the largest circulating English weekly on current affairs.  He also has his own show on the TV channel run by the group.  To say that he is a virulent critic of the government would be an understatement.

When those who are inflicted with a ‘wanting to believe’ disease belong to a class that is called intellectual, then the analysis of what is happening will necessarily be seriously faulted.  When they refuse to take the remedial medicine suggested, the ‘intellectual’ not just loses credibility but makes a right fool of himself/herself.  The rise of the Hindutva Troll Army will mercilessly haunt such ‘intellectuals’.