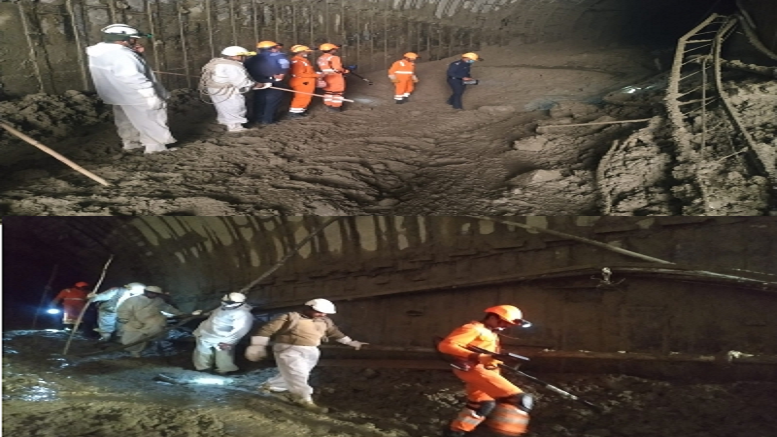 Rescuers on Sunday found 12 more bodies, including five from a tunnel where 25 to 35 people are reportedly trapped at the disaster-hit Tapovan project in Chamoli district in Uttarakhand.

During the excavation work inside the tunnel, five bodies were found, said SDRF officials after the rescue operation was expedited since Saturday. This is the first time since the February 7 flood that the rescuers have been able to find bodies inside the tunnel.

“We are expecting more bodies as hopes are receding for survival,” admitted a top official. There is still no contact with the trapped people inside.

Officials claimed the rescue work has been speeded up with the installation of some additional machines like excavators on Saturday.

Presently, the rescuers are working on two strategies e drilling a big hole vertically downward on one hand while digging and excavating debris and sludge inside the tunnel.

Elsewhere, seven bodies were recovered e six from disaster-hit Reni village and one from Alaknanda river in Rudraprayag area.

With the recovery of these 12 bodies on Sunday, the death toll has risen to 50. Nearly 200 people went missing after the February 7 morning deluge.

After days of digging and excavation work, jawans of the Army, ITBP, NDRF and SDRF, who are engaged in the rescue works, had managed to open a sizable portion of the tunnel.

But the presence of heavy silt and sludge inside the tunnel slowed down the excavation and digging work, top government officials said. Rescuers also consulted NTPC officials to understand the complicated design of the tunnel.