After Two Decades, Tribal Bru Refugees to be Repatriated to Mizoram 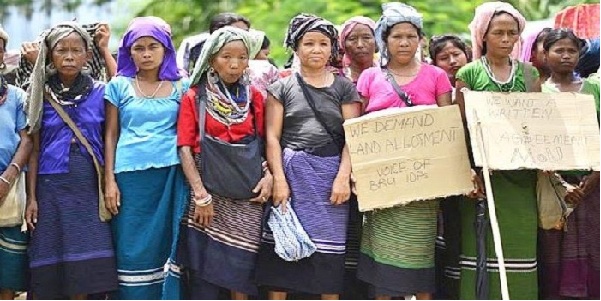 As many as 32,876 displaced people belonging to the Bru community will be repatriated to Mizoram from Tripura after two decades of being away from home, the Ministry of Home Affairs said. The decision was taken after a tripartite agreement was signed by the two state governments and the Centre.

The Bru community was once spread across Mamit and Kolasib districts of Mizoram. They were forced to flee their native land in 1997 after animosity between the tribe and the Mizos turned violent. Conflict between the communities began in 1995 when organisations representing Mizos — majority community in the state — demanded that Brus be stripped of their voting rights as they were not indigenous to Mizoram.

Now it is to be noted that the majority community in Mizoram is that of Christians. The Christian Churches of Mizoram have, over the past 20 years, converted the natives of the state on a massive scale, and as per the last census, 87.16% of the population of the state is Christian. Non-Christians are in a constant state of persecution and pressure to convert and enjoy no protection under the law.

The legal benefits that should be available to a threatened minority, are perversely enjoyed by the dominant Christian community that is engaged in evangelizing the minority aggressively.

In 2011, RSS ideologue and a key member of BJP’s think tank, Ram Madhav, wrote an article describing the persecution of the Reang tribe of Mizoram whose original name is Bru. He wrote,

“For a long time they had been facing acute hardships at the hands of the majority Mizos in the areas where they traditionally lived. This discrimination reached its crescendo when the lists containing the names of the Bru people as voters had been mysteriously burnt down in a fire accident. In the subsequent re-enumeration, names of hundreds of Bru people were deliberately omitted. This forced the Bru leaders to go in for the demand of autonomous council in order to protect and preserve their identity.”

The Narendra Modi Government has made sincere attempts at solving this longstanding vexed issue and sanctioned Rs.680 crores for the rehabilitation of Brus.

Replying to an unstarred question raised by a Congress MP in the Rajya Sabha on December 23, 2015, Union Minister of State in the Ministry of Home Affairs, Kiren Rijiju, disclosed,

“Due to ethnic violence in the Western part of Mizoram in October, 1997, about 30,000 Brus (5,000 families) migrated to North Tripura in 1997-98. As on date, approximately 8573 Brus (1622 families) have been repatriated. The Ministry of Home Affairs with the co-operation of the State Governments of Mizoram and Tripura has taken measures for return of Brus to Mizoram.”

Anyhow, the non-Christian minorities of Mizoram continue to face an existential crisis in the state and do not enjoy any protection despite their rapidly depleting numbers. For instance, in May 2013, an explosion caused by a bomb made from a bundle of gelatine sticks ripped through a temple inside the premises of the 26th battalion Assam Rifles in Aizawl. On the very same day the opposition, Mizo National Front (MNF) was organising a rally called ‘Milem Biak Duhloh Kawngzawh’ or ‘Anti-Idol Worshipping Rally.

After a long battle, Bru community will be repatriated to Mizoram before September 30, this year, with the Central government providing financial assistance for their rehabilitation in Mizoram. Centre will also address their issues of security, education, livelihood among others in consultation with the governments of Mizoram and Tripura.

Apart from this, each family would also get Rs 1.5 lakh as house building assistance, free ration for two years and free transportation while shifting to Mizoram.

Status of minority rights of Hindus and tribal religions in states of Bharat with non-Hindu majority has never been positive while Christians and Muslims, when in minority, demand all the special treatment under law. However, this act of repatriation of Bru community in Mizoram can be seen as a ray of hope as Kashmiri Pandits have also been fighting a long battle to get back to their native land of Kashmir.