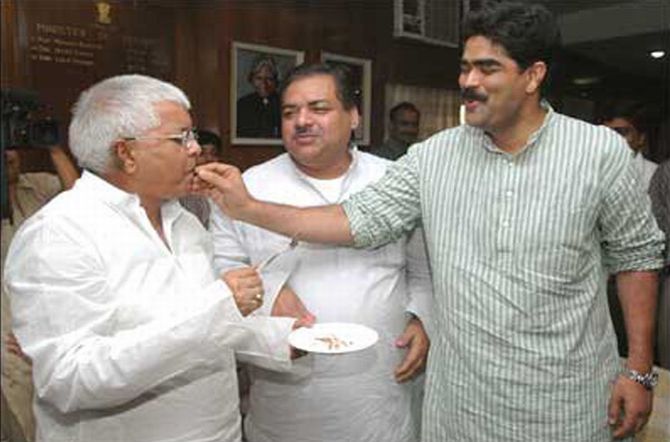 In the tape, Shahabuddin complains to Lalu Yadav about police air firing during a communal clash that had taken place in his hometown of Siwan when Ram Navami processionists were attacked by a Muslim mob. When Lalu asks for more details on the incident, Shahabuddin menacingly says “khatam hai bhai SP aapka” (your SP – Superintendent of Police – is finished). He goes on to add “danga karwa dega” (a riot might erupt) – a clear cut warning that such decisive police action would not be tolerated.

Shahabuddin then demands that Lalu find the rest of the details himself – in short, asking for political action against the SP who had taken decisive steps to control the situation.

In a panel discussion on Republic TV following the expose, Arun Kumar Srivastav, General Secretary, JD(U), defended Lalu’s right to have a conversation with his party member Shahabuddin ‘saheb’ (sic) and said the only thing probe-worthy was Shahabuddin laying his hands on a mobile phone while in jail. When probed on why Lalu did not report the call by Shahabuddin to authorities, he said “don’t expect such morality from today’s political leaders”. Later on, he said “Lalu is not the only corrupt politician, several in BJP are corrupt as well.’

Bihar has spiraled into lawlessness ever since the RJD-JDU-Congress alliance swept to power in the 2015 assembly election. There have been a spate of kidnappings, murders and other crimes, which have brought back memories of the dreaded jungle-raj witnessed during the disastrous 15 year Lalu-Rabri rule from 1990-2005. Even though Nitish Kumar holds the CM post, RJD is the single largest party – and the Lalu clan clearly calls the shots. Lalu’s younger son Tejaswi Yadav is the deputy chief minister, and his elder brother Tej Pratap Yadav is the health and road transport minister.

Last September, there was a furore when RJD Supremo Lalu Yadav’s protégé and Mohammad Shahabuddin (also known as Shahbu Miyan – AK 47 locally, a 4-time MP and 2-time MLA) walked out on bail from Bhagalpur jail ending 11 years of captivity. His bail was soon cancelled by SC, and on 15 Feb 2017 the Supreme Court directed that he be transferred from Siwan Jail in Bihar to Tihar Jail in Delhi.

This MyInd.net piece from Sept 2016 last year captures the terror of Shahabuddin and his clout in RJD –

“Shahabuddin continues to be part of the RJD’s top policy-making body even though he was in jail all these years. Obviously, the question does not arise of RJD distancing from the Siwan strongman. It was clearly visible with RJD MP from Bhagalpur, Shailesh Kumar alias Bulo Mandal lining up outside the jail to receive him among Shahabu Miyan’s supporters and other RJD workers.

Not only that, two absconding shooters Mohammad Kaif alias Bunty and Mohd. Javed wanted for the murder of Siwan journalist Rajdeo Ranjan walking alongside the RJD strongman were also seen. These absconders were also seen with Lalu’s son on many occasions.

Just five km away from Pratappur, the village of Mohd. Shahabuddin, the 70-year-old Chandrakeshwar Prasad (whose three young sons of were murdered by Shahabuddin’s henchmen) regrets that the bail order “is nothing less than my death sentence.” This time, Shahabuddin is out on bail in the murder of Rajiv Roshan, Chandrakeshwar Prasad’s eldest son. Roshan was an eyewitness to the killing of his two brothers, Girish and Satish, who were kidnapped in 2004 and killed by pouring acid at Pratappur. Rajiv had somehow escaped, but on his return to Siwan in 2014, he too was murdered in front of his father.

Asha Ranjan (wife of Journalist Rajdeo Ranjan who was killed in a busy marketplace in Siwan on May 20) was also seen crying seeking a CBI probe into the case saying: “I believe the local administration is under political pressure, and that is why the culprit is roaming around free.”

Earlier an MLA from RJD, from 1996, Shahabuddin went on to become a parliamentarian four times, in which his 2004 Lok Sabha contest was from jail. In all, Shahabuddin faces around 40 criminal cases, out of which, judgment has come in 12 cases. He was acquitted in four of them, while he has almost completed his sentence in eight cases. While in some cases the trial is yet to complete, Shahabuddin has been convicted in 10 other cases. In August 2007, Shahabuddin was convicted of attacking Siwan SP Sanjiv Kumar Singhal. He faces a term of 10 years in the case.

Shahabuddin is the synonym of terror in Bihar. Among many charges, he was accused of the murder of the then JNU student union president Chandrashekhar in 1997 for the latter’s audacity to campaign for CPI(ML)’s candidate against him in Siwan.”

Lalu Yadav has been a big favorite of Lutyens’ media – he is often portrayed as a rustic, earthy, plain-speaking politician who is no saint, but ultimately has his heart in the right place as he is ‘secular’. 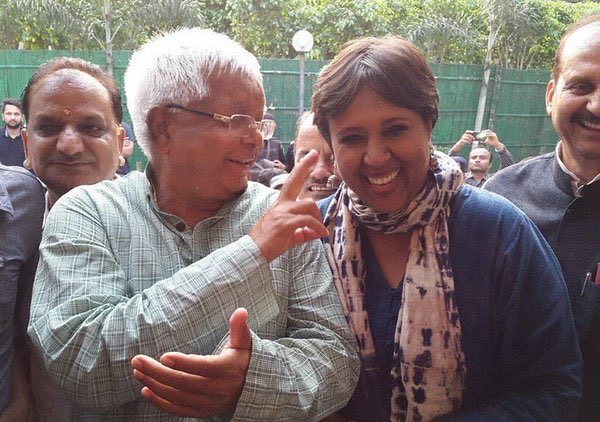 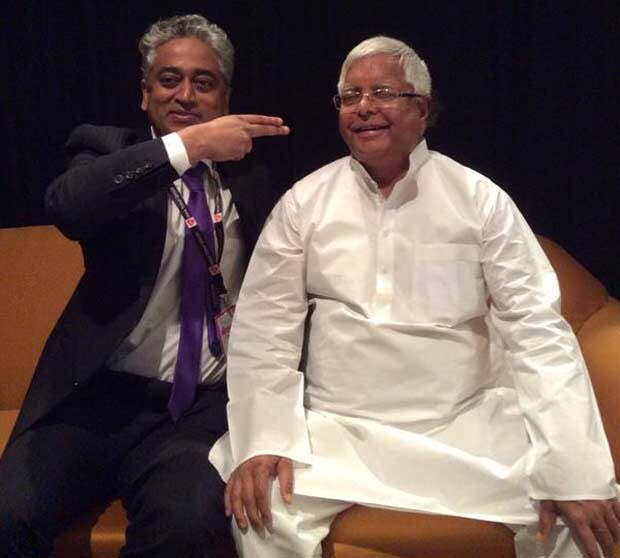 Another explosive revelation is that the same Lalu-Shahabuddin tape was offered to 4 TV channels last year, but they all refused before Republic TV picked it up – 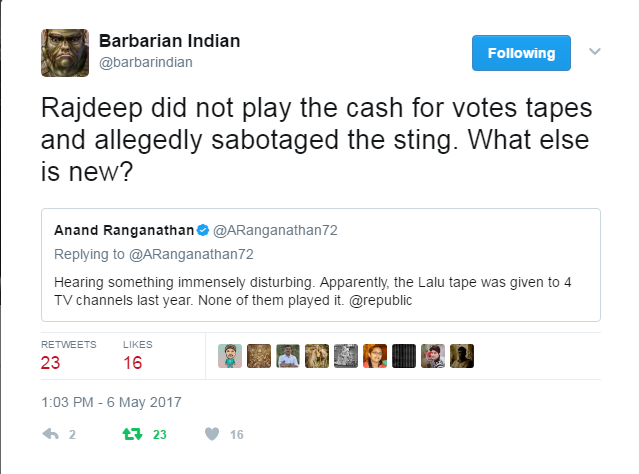 This is yet another example of how the nation has been conned in the name of secular, socialist politics and liberal journalism. The elite of this country which has controlled the narrative and public discourse of this country from Lutyens’ Delhi stands thoroughly exposed as a force which is opposed to the national interest.