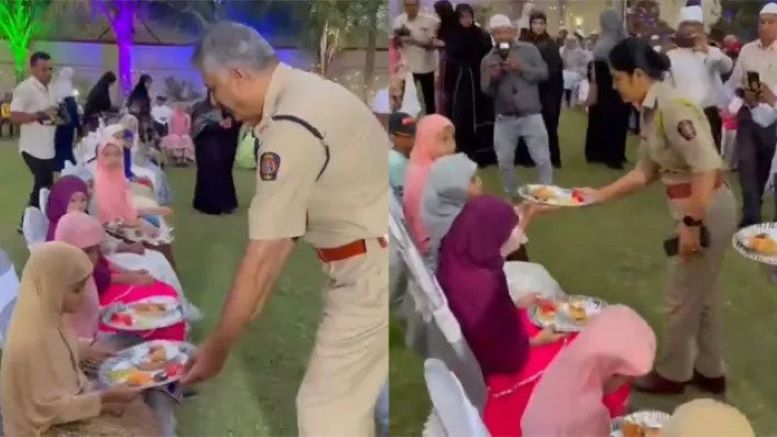 A video of Solapur police serving food at an Iftar party is doing the rounds of social media. Social media (SM) users have reacted sharply to the viral video. Irked SM users opined that serving food wasn’t the job of the police personnel.

As per reports, Solapur Police Commissioner Harish Baijal hosted an Iftar party on April 27 for students and teachers of Social Urdu Primary School. Baijal had reportedly invited students to spend time with the birds at his residence when he learned that most of them were fasting. He called them the next day for Iftar at his place. Azaan and Salah (namaz) were also offered on this occassion.

Irate twitteratis raised questions regarding police in uniform serving food. Some asked if they would extend the same courtesy to Hindus by doing Kanya Puja during Navratri.

What about such a gesture during Ganesh Chaturthi or Navratri?

Some also pointed out the double standards highlighting how Maharashtra police had mistreated Warkaris while they are feeding Muslims.

On April 18, BJP leader Nitesh Rane questioned Mumbai police commissioner attending Iftar party of riots-accused Raza Academy. He tweeted “A few years back, a protest called by Raza Academy in Mumbai had turned violent in which they had attacked Mumbai police officials too who were on duty to control things. There were allegations against those violent protestors that they misbehaved with female cops who were on duty on that day in South Mumbai’s Azad Maidan area”.

Raza Academy has been accused of organizing the Azad Maidan riots in Mumbai during which Islamists destroyed Amar Jawan Jyoti dedicated to martyed soldiers. Raza Academy also incited violence in several parts of Maharashtra last November using the Tripura disturbances as an excuse.

The police indulging in displays of ‘secularism’ and pleasing one section of the soceity alone is never desirable. The duty of the police is to maintain law and order and not serve food.